Gaza response shows Israel hasn’t learned from the past

The Israeli government’s handling of the demonstrations on the Gaza border this week by using live fire against the protesters illustrates the continued blindness of its decision-makers. 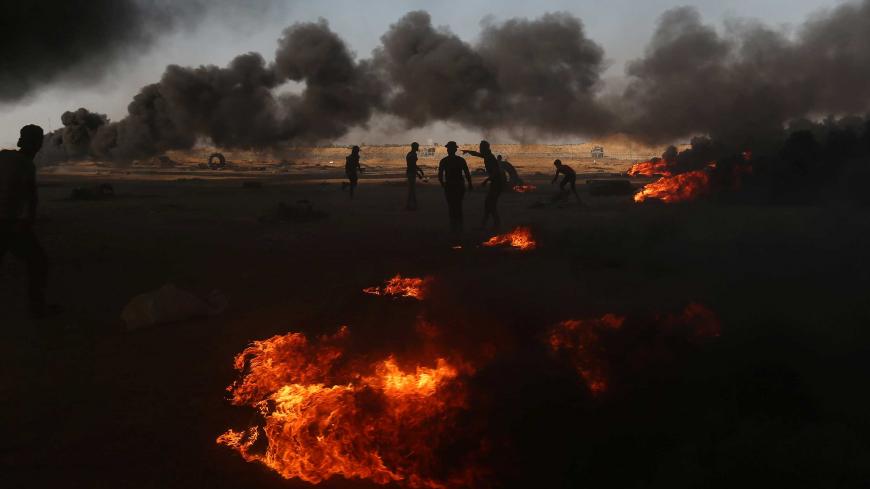 Palestinian demonstrators are seen as smoke rises from burning tires during a protest marking the 70th anniversary of the Nakba, at the Israel-Gaza border in the southern Gaza Strip, May 15, 2018. - REUTERS/Ibraheem Abu Mustafa

Israel basked in a series of seeming triumphs this past week. It began with performer Netta Barzilai winning the Eurovision Song Contest on May 12, continued with the inauguration of the US Embassy in Jerusalem two days later and ended with the army repelling tens of thousands of Palestinian protesters who stormed the Gaza border fence, all without incurring Israeli casualties. The killing of dozens of Arabs and wounding of thousands of others did not prevent masses of jubilant Israelis from gathering on Rabin Square in Tel Aviv to celebrate their singer's victory. After all, are we Israelis to blame that Hamas sent its people to kill Israelis? Israel Defense Forces spokesman Brig. Gen. Ronen Manelis' message that Hamas was the one “killing Gaza” gets across, and how. Some 83% of Jewish Israelis support the IDF’s live fire policy on the Gaza border.

So what if South Africa recalled its ambassador from Tel Aviv, and Belgium lodged a protest with the Israeli ambassador in Brussels? Who cares that Turkey expelled Israel’s ambassador? As long as the frenetic American president supports us and we have a bunch of loopy evangelists on our side, Israelis do not mind the Europeans paying lip service to the Palestinians. A year from now, they will all be sending their contestants to the Eurovision contest in Jerusalem, “our unified capital,” anyway.

Senior Israeli diplomats and defense officials consistently reiterate the message that Hamas is cynically using the destitute residents of Gaza as cannon fodder in a bid to extricate the movement from its diplomatic and media isolation. Indeed, the higher the casualty figures, the higher Hamas climbs in the news around the world. The headlines also point out the suffering of Gaza's children and report on alarming unemployment levels of over 40%, making it hard for Israeli representatives to hide behind arguments of self-defense.

Israeli decision-makers and analysts understand that a large number of fatalities in Gaza does not serve Israel’s interests. So why is a technological superpower like Israel unable to defend its border without directing live fire at people massing on the other side? As recently as January, Israel’s former Coordinator of Government Activities in the Territories, Maj. Gen. Yoav Mordechai, boasted that Israel had located and destroyed three tunnels Hamas had dug into Israel. “Israeli genius and the Jewish brain have found a solution for all the terrorist tunnels,” he told Arabic-language al-Hurairah TV.

In what tunnel was the "Israeli genius" hiding while Hamas was gearing up for its “Great March of Return” to breach the Gaza fence and send thousands of Palestinians into Israel? The botched handling of the border protests indicates that the "Jewish brain" missed the lessons of Israel’s failure to deal with the tunnel threat prior to the 2014 war with Gaza known as Operation Protective Edge. The state comptroller, the government’s official watchdog, found that despite growing evidence of tunnel digging in Gaza, Israel’s Cabinet did not take any action to counter the threat between 2010 and 2014. The comptroller emphasized that though the magnitude and significance of the threat were known for years, the political echelons and intelligence community did not focus on the issue, not even as a low-level threat.

In their ham-fisted attempt to unlink the distress of Gaza’s 2 million Palestinians from the recent series of anti-Israel demonstrations, the narrative of Israeli government and military officials has Hamas enticing women and children to storm the fence for a pittance (up to $100), funded by Iran. How desperate and hopeless does a person have to be to endanger his or her life for small change? How obtuse do Israeli leaders have to be to ignore the threat of the Gaza pressure cooker blowing up in Israel’s face? That same Mordechai, the IDF expert on genius issues, was one of those who warned the Cabinet 18 months prior to Operation Protective Edge about the repercussions of the worsening humanitarian crisis in Gaza.

A special UN report issued in September 2015 warned that by 2020, the Gaza Strip could become uninhabitable as a result of conditions stemming from over a decade of siege by Israel and Egypt. The head of Military Intelligence, Maj. Gen. Herzl Halevi, told the Knesset’s Foreign Affairs and Defense Committee in 2016 that the Gaza Strip is in the grip of a grave economic crisis. Nonetheless, Defense Minister Avigdor Liberman knows better than anyone else. “There is no humanitarian crisis in Gaza, pure and simple,” Liberman declared in February. “Someone issued spin, disinformation,” he added, referring to a report by Lt. Gen. Gadi Eizenkot. “The chief of staff used the term ‘a difficult civilian reality,’” Liberman argued. Vive la difference. The state comptroller’s report on Operation Protective Edge read that the government was warned that severe water and power shortages in Gaza, along with deep unemployment and a sense of suffocation and siege, “could result in a flare-up.” So what?

The government’s handling of the Gaza demonstrations illustrates the ongoing blindness of its top echelons. The state comptroller need not waste time examining the decision-making process regarding the crisis on the Gaza border, as nothing has changed since his report on the 2014 war. For example, the comptroller found at the time that strategic discussions of the situation in Gaza focused only on the extent of military action against Hamas, not on other options, despite the fact that the Cabinet was informed of the dire state of the infrastructure in the Gaza Strip, including its serious potential implications for Israel. The comptroller chastised Prime Minister Benjamin Netanyahu, saying that by ruling out diplomatic alternatives without presenting them to the Cabinet, he had prevented consideration of alternatives and discussion of their prospects and dangers.

One of the alternatives that has recently re-emerged in the headlines is a cease-fire agreement, known in Arabic as a “hudna,” between Israel and Hamas. Former Shin Bet adviser Mati Steinberg distinguishes between a “thin hudna” that would ease the woes of Gaza’s residents and a comprehensive long-term hudna that would include major infrastructure projects such as a Gaza seaport. A broad hudna, he says, would indicate that violent pressure bears fruits, while peaceful means, as espoused by the rival Fatah organization in the West Bank, are futile. “The absurdity will peak when Israel gives up its demand for Hamas to disarm, while the Palestinian Authority sticks to its demand as a threshold condition,” Steinberg added. He therefore suggests a “thin” hudna, along with diplomatic negotiations toward the preferable alternative of a two-state solution. For now, all we can do is wait for the US president’s promised “ultimate deal” peace plan between Israelis and Palestinians, and hum along with Netta’s “Toy” all the way to nowhere.