Fishermen in Gaza are not celebrating Israel's expansion of their fishing zones, saying the measures are largely empty and there are no guarantees they will last. 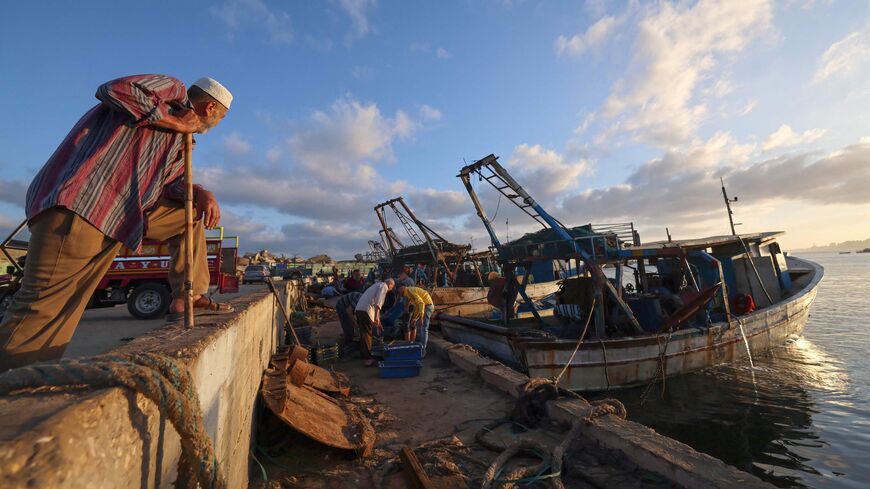 GAZA CITY, Gaza Strip — Israel's series of goodwill gestures to the Palestinians in the Gaza Strip Sept. 1 include the expansion of the fishing area, an increase in the amount of water sold to Gaza and an increase of work permits as well as the entry of more goods and equipment into the besieged enclave through the Kerem Shalom border crossing.

Hamas spokesperson Hazem Qassem told Al-Monitor, “Agreements among mediators and Israel are in place to relieve the blockade imposed on the Gaza Strip. Israel has tried to avoid [easing the siege] after the latest escalation in May, but the Palestinian factions in Gaza have insisted.”

He added that as a result of the pressure caused by the "night confusion" activities on the eastern borders of the Gaza Strip in the past weeks, Israel made some concessions.

Qassem said, “What we are demanding is a greater range than these measures, like guaranteeing citizens' freedom to move through the crossings and beginning the reconstruction process.” He added, "If the Israeli occupation does not take real steps to lift the blockade, popular pressure will continue and more escalation might happen.”

Zakaria Bakr, head of the local fishermen union in Gaza, told Al-Monitor, “Fishermen do not welcome the decision to expand the fishing area since there are no guarantees the decision will last. Any friction on the land border between the Gaza Strip and Israel will negatively affect fishermen and fishing areas.”

He accused Israel of tightening maritime restrictions to harm the fishing sector, which suffered great losses during the 18-day closure during the May escalation. Bakr explain the decision to expand the fishing area will remain meaningless as long as Israel prevents the entry of fishing equipment and material to build ships.

He called for measures to ease fishermen's living conditions, saying, fishermen must be protected from the Israeli attacks and fishing equipment must be allowed to enter to the Gaza Strip.

He said, “Announcing the expansion of fishing areas is just Israeli propaganda to improve Israel's reputation in the international media.”

The current situation is leaving more than 4,000 Gaza fishermen unable to work. Bakr explained that Gaza's northern coast has plentiful fishing, but Israel has restricted the fishing zone to only six miles there.

Bakr believes that this policy is intended to stop Palestinian fishermen from providing for the residents of Gaza and force them to import food from Israel, a violation of international law and the Fourth Geneva Convention.

Khalid al-Hbeel, a 55-year-old fisherman, told Al-Monitor that expanding the fishing zone does not benefit the fishermen, saying the next fishing season doesn't even start until the end of September and Israel could go back on the decision before then. He said if the decision does hold, the fishing sector might recover some.

Hbeel added that although he owns a large boat, he has not yet sailed out the maximum distance given the lack of fish at this time of year.

Hbeel continued, “The cost to sail for 15 miles could exceed $1,200, so fishermen think carefully before sailing for that distance. No boat has sailed this distance since the Israeli announcement about expanding the fishing area.”

He added, “Around 95% of fishing boats are worn out because of lack of maintenance and lack of spare parts. Fishermen sometimes have to remove parts from old trucks and recycle them to fit their boats.”

Asked about incidents of fishermen being shot at by Israeli forces, he said that strong currents can cause boats to drift further than intended. “What is the benefit of expanding the maritime areas if fishermen are threatened by Israeli boats that puts their lives and boats at risk?”

He believes Israel wants to force Palestinian fishermen out of the sea even though they are not a direct threat to Israel's security. Fishermen only want to feed their families, he stressed.

Hussam al-Dujni, a professor of political science at Umma University in Gaza, told Al-Monitor, “Israel's goodwill measures at this time are triggered by the US administration's efforts to make changes in the Middle East, the public pressure on the eastern border with the Gaza Strip, the use of new resistance techniques and the Israeli government's concern about the disastrous deterioration of the humanitarian situation in Gaza which could implode and drag the region into escalation.”

He went on, “The new Israeli measures are not in line with the needs of the Gaza Strip. The expansion of the fishing zones without allowing the entry of the needed equipment will not help the fishing sector. Israel wrongfully exploits the dual-use issue to justify the ban on the entry of certain equipment. Over the past 16 years, the Palestinian resistance has managed to smuggle only the equipment it needs for its own purposes.”

He added, “Banning the import of material will only affect the drained residents of Gaza.”