Jacky Hugi writes that the study of the Hebrew language and its literature is widespread in Cairo's universities. 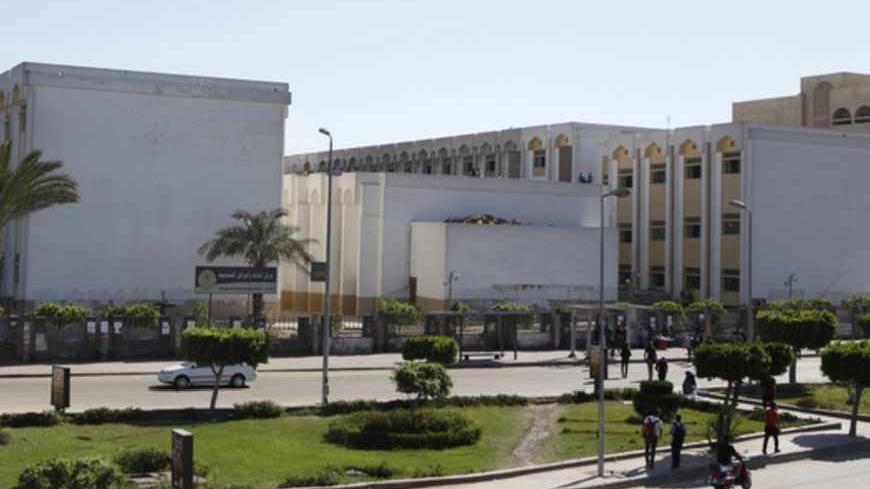 A general view shows Al-Azhar University, which was founded in the 10th century through the endowment of a charitable trust, or awqaf, in Cairo, March 19, 2013. - REUTERS/Amr Abdallah Dalsh

The growing tension in Jerusalem-Cairo relations, particularly since the ouster of former President Hosni Mubarak, is absent from Egyptian academic circles. Political hostility apart, on Egyptian campuses and among the intelligentsia, Israel is considered an object of interest and evokes much curiosity, something that would certainly surprise many Israelis.

Nine of the 14 state universities in Egypt, including Al-Azhar Islamic University, have Hebrew departments. Close to 20,000 students study Hebrew at these universities at any given point in time, most in colleges of Middle Eastern Studies. Each year, at least 2,000 students graduate with bachelor's degrees that include the study of Hebrew.

In addition to studying Hebrew, Egyptian academics work on numerous issues related to Israeli society and culture. The project for Hebrew to Arabic translation, most of which is a private initiative, includes major bestsellers that were published in Israel. The Egyptians are also very interested in Israeli politics and Judaism.

Dr. Yossi Amitay, a researcher of modern Egypt, served for four years as director of the Israeli Academic Center in Cairo, which operates through funds from Israeli universities, and its activity is stipulated in the peace treaty between the two countries. Amitay, who is fluent in Arabic, kept in close contact with academic Egyptians.

“I came to the conclusion that despite the fact that there is hostility against Israel in Cairo, there is even more curiosity. People want to crack the Israeli code. To understand what motivates Israel and where it is heading.”

Egyptians have diverse motivations for learning about Israel and Hebrew. Some wanted to do business with Israel, before this hope was dashed due to the political pall that has been cast over the countries. Others hope to be hired by the intelligence services or to be employed by the media as Israel experts. Others are simply curious or need to fill a university requirement to study a foreign language.

Dr. Amitay said that the study of Hebrew in Egypt began back in 1933, in the days of King Fuad and the British Mandate. Later, the Egyptians helped their Arab brethren, particularly in Libya and Saudi Arabia, to establish Hebrew departments at academic institutions in Tripoli and Riyadh.

“Most Egyptian interest in Israel relates to the structure of the government, political parties and arts and cultural institutions in Israel. I was asked a great deal about those issues. One of the most prominent Hebrew instructors in Egypt, Dr. Mansour Abdel Wahab, Mubarak’s Hebrew interpreter, wrote his doctorate on the Habima Israeli national theater. He knew the names of many actors and plays staged at Habima since Mandatory Israel. I met him and he had a wealth of knowledge in that field.”

On bookshelves in Cairo, in the past decade you could find Arabic translations of the best novels to have been published in Israel, including My Michael by Amos Oz, Motzart Wasn’t a Jew by Gabriela Avigur-Rotem and Jasmine by Eli Amir. In nonfiction, in recent years Dr. Yossi Amitay’s research on the Egyptian left, Israel Knohl’s book, Where Are We From?, and Avigdor Shinan’s That Man: Jews Speak about Jesus have all been translated into Arabic. In terms of Jewish literature, Dr. Mustafa Abed al-Mabud translated the six volumes of the Jewish oral law — the Mishnah — into Arabic.

Mohamed Seif El Nasr, a presenter on BBC Arabic, started his career on Nile TV, which in the past had dedicated a daily two-hour segment to news in Hebrew. His Hebrew is outstanding, and he used it a great deal when he came to cover the elections for the 19th Knesset this past January for the British channel. He studied Hebrew in the department of Eastern Studies at Cairo University.

“In Egypt, you can find intelligent young people who speak good Hebrew, and if they meet Israelis and speak their language, it would be difficult to tell that they are Egyptians,” he said.

“When I was young, my father told me many war stories, and I didn’t understand — on the one hand, we fought four wars against Israel; in other words, it’s a hostile country. On the other hand, I could see how Israelis would visit Egypt and receive a very respectful welcome. I wanted to make sense of this contradiction, and that might be what drew me to study Hebrew.”

Seif relates that as part of his studies in the department, he and his friends were introduced to Israeli and Jewish history, to the writings of Haim Nahman Bialik and Shaul Tchernichovsky and obviously also read the Hebrew press. “We researched the image of the Arab in Hebrew literature, the kibbutz movement and how it was reflected in Hebrew literature. We conducted research based on the Old Testament and other subjects for the connection between Hebrew literature and history.”

Much of Egyptian study about Israel is dedicated to politics or the interface between literary and cultural works. Dr. Abdo Ramadan, a journalist with Voice of Cairo, researched the leftist movement Peace Now as expressed in Hebrew literature. Ramadan examined writings of four Israeli authors and researched the reflection of the movement’s activity in their work. The four were David Grossman, Amos Oz, A. B. Yehoshua and Sami Michael.

“I tried to examine how Israeli writers expressed the ideas of Peace Now and to what extent the movement had been able to effect a change in Israeli society," he said. “In Egypt, we believed that the movement had a strong influence on the Israeli public. I found that it did effect a change, but not to the extent we expected from a movement of its type to create in Israeli society.”

Heba Hamdy, a graduate of Cairo University’s department of Eastern Languages, is an example from the young generation of Egyptians who learned excellent Hebrew through new media — the Internet and satellite television channels. She is very well versed in Israeli politics and also in the current culture of consumption, such as the reality hits broadcast on Israeli television.

“I knew that I wanted to speak the same jargon as Israelis, including their slang,” she said in fluent, virtually accent-free Hebrew. “I asked myself where I could learn Hebrew at that level and came to the conclusion that the Israeli chat rooms on the Internet were the place to go.” So she went into the chat rooms, identified as an Egyptian and wrote in Hebrew.

“As soon as they realized that I was an Arab, they cursed me like you wouldn’t believe," she said, using a very slangy and widespread Hebrew expression. "They really cursed me out. I couldn’t believe what I was seeing.”

In her studies at the university, Hamdy researched extensively works of Hebrew literature.

“Among other things, I studied Sami Michael’s novel Pigeons at Trafalgar Square and Joshua Sobol’s play 'The Palestinian Girl.' Sobol has a fascinating writing style.”

Despite the intense work in Egypt on Israeli issues, the researchers who study them are still eyed with much suspicion. Mounir Mahmoud, a tour guide from Cairo, has known Hebrew well for over 30 years. He started a private language school that offers the general public classes in Hebrew as well. Mounir relates that political views handed down to the Egyptian public over decades prevent the average Egyptian from touching any expression of Israeli culture.

“People attack us and say, 'what’s your connection to Hebrew, to Israel?' Sometimes, I have no choice but to tell these people, 'you want to hate Israel? Be my guest, but at least hate it based on knowledge,'” he said. “Some people don’t understand why we are interested in Israel and Hebrew. It has nothing to do with a love or hate of Israel. And despite this, at symposia about Israeli-related issues we organize at the school, we sense that participants have a tremendous hunger to know more about Israel.”

Journalist Mohamed Seif is optimistic. He believes that the language is the key, saying, “Israel and Egypt suffer from a problem of mutual trust. When you negotiate with someone whose language and spirit you know, the gaps can be bridged.”

Jacky Hugi is the Arab affairs analyst of the Israeli army radio Galie-Zahal, a columnist for the Israeli business newspaper Globes and the former Arab Affairs correspondent for Israel`s Maariv daily.