The ''two languages'' project, including a website and an anthology that was just published, was born out of the mutual curiosity of Jewish and Arab writers and editors about each other's literary scene, so unknown to either side. 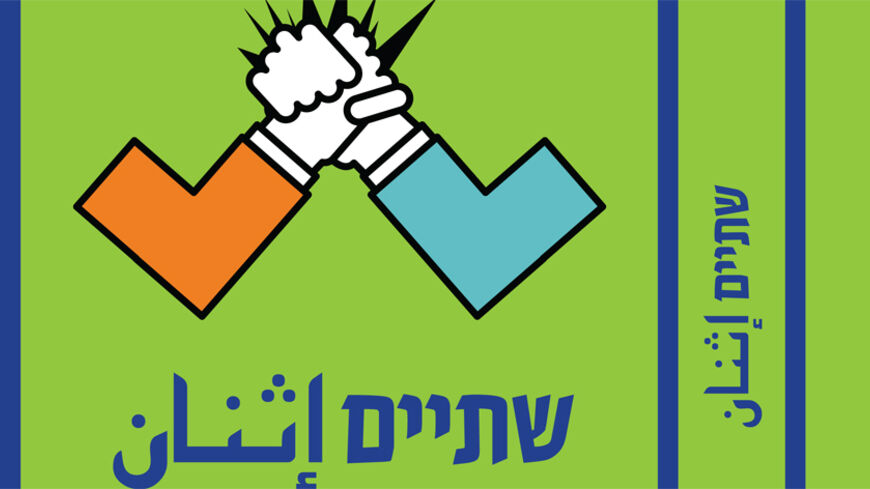 The cover of "Two: A Bilingual Anthology," which features the works of Arab and Israeli writers translated into Hebrew and Arabic, published in Israel, Oct. 23, 2014. - Keter Publishing

A new anthology of short stories and poetry (and a comic strip, too) is about to challenge Israeli readers, Jewish and Arab alike. The book, titled “Two: A Bilingual Anthology,” collects the writings of young Israeli authors, both Jewish and Arab, presenting each text in both Hebrew and Arabic.

“The very fact that you are holding a book and reading it in Hebrew, with a text in Arabic script on the facing page, or vice versa, is a very powerful experience. Even if you don’t read Arabic, when reading this book you can no longer remain oblivious to the fact that this is a place where people live and create in two languages,” said Anat Niv, editor-in-chief of the Keter Books publishing house, which released the book.

The project, which includes a website intended to produce similar collaborations in the future, was coordinated by three editors: Tamer Massalha, Tamar Weiss-Gabbay and Almog Behar. Work on the book began in 2008, and it includes some of the country’s up and coming young authors, such as Anat Einhar, Dror Burstein and Einat Yakir in Hebrew, and Marwan Makhoul and Iyad Barghouti in Arabic.

From the moment it was conceived, this book was never intended to be light reading for the average Israeli, living in a country where poetry collections are hardly best sellers. Besides the unprecedented use of the country’s two official languages, Hebrew and Arabic, on facing pages, the book also challenges its readers with stories of a young Arab woman who misses her beloved after his suicide attack, or of an angry ghost in Haifa, raging about the “crimes of 1948,” while recalling the names of the city’s Arab streets.

Weiss-Gabbay was raised in the national religious sector and grew up in its Bnei Akiva youth movement. As one of the editors, she said, “I also felt uncomfortable reading about a girl longing for her loved one, who committed a suicide attack, but literature was never intended to make people feel comfortable. I want to hear all sorts of voices. I want to listen to them and argue with them.”

During the six years in which the project was developed, Israel underwent three violent campaigns against the Palestinians: Operation Cast Lead (2008-09), Operation Pillar of Defense (2012) and Operation Protective Edge (2014). The conflicts made cooperation between the participants all the more difficult.

“The project got stuck frequently, and for all sorts of reasons,” said Weiss-Gabbay. “It was hard to find a publisher who would pick it up, believing that this book has an audience, while the writers themselves also had their own fair share of suspicions and fears. Some authors, particularly Arabic-language writers, decided to pull out in the middle, fearing that the book would leave the impression that they were collaborating with the Israeli establishment. Others were hesitant and only agreed to cooperate after they researched the project and looked into who was behind it. Some refused to participate from the very beginning, while others agreed to participate but withdrew at the last minute.”

One person who had no qualms about participating in the project was the poet Rajaa Natour, who has two poems included in the anthology. “It was a long journey for me, confronting the Hebrew writing,” she said. “For me, it is the language of my enemy, and I was forced to learn it. It took a long time, but I eventually found an aesthetic in Hebrew. I now see Hebrew as a tool, not as an identity. I know exactly who I am. My identity is obvious to me. But at the same time, I want to speak to the Jewish reader, to get angry at him, to curse him, to tell him about what he doesn’t understand and what he doesn’t know. I want to say all that in my own voice, but in his language, because he doesn’t know Arabic. That way I can also present Arab culture to the other side. I can show them that it has a beauty of its own, and that it is not all about the Islamic State and terrorist attacks.”

Once the book’s editors raised some of the money to publish it from various foundations and grants, it was the Keter Publishing House that eventually rose to the challenge. Though it is the only publishing house in Israel that is traded on the stock market, it threw its support behind a book that is not likely to make any best-selling list. “We made sure to obtain external support, so that the financial risk was moderated,” Niv said. “Obviously, the book lacks the potential to become a best seller, but at the same time I think that it appeals to a curious, mixed, literary audience. The decision to publish the book was not based on political considerations. The considerations were cultural and literary. This is the first time that both sectors can read the exact same texts, and that is a beautiful thing, because cultural and political processes are so integrated here.”

“It was mutual curiosity that guided the project,” Weiss-Gabbay said. “People are unfamiliar with works written in Arabic, which aren’t translated into Hebrew, and so little actually gets translated. The only written works that do get translated are those of veteran, well-known writers. The fact is that I am unfamiliar with an entire literary scene that exists and is active here right beside me. Among people who want to listen to and get to know the other side, there is a lot of curiosity, especially since last summer. They realize that we are two peoples living here together, for better or for worse.”

Natour confirms that the same curiosity exists in Arab society, too. “People in the Arab world don’t know David Grossman or Hanoch Levin. Jews are just soldiers and murderers to them. I have friends in Iraq who are very curious about Israeli society, but at the same time, they are scared and afraid to actually visit Israel, because that would mark those Arab authors as collaborators with the occupation.”

Natour’s poems don't actually deal with politics, but she said, “Love is also political. I speak out against accepted norms. I want to upset the Palestinian discourse, too, and talk about the role of women and religion. I’m not only interested in the occupation. There is also internal Palestinian oppression, which must be spoken out against as well — and from there we must come out against the greater oppression of the occupation. There is no such thing as ‘only social’ or ‘only political’ or ‘only romantic.’ They are all interconnected.”