In an interview with Al-Monitor, Israeli poet Agi Mishol speaks about the difference between men and women poets. 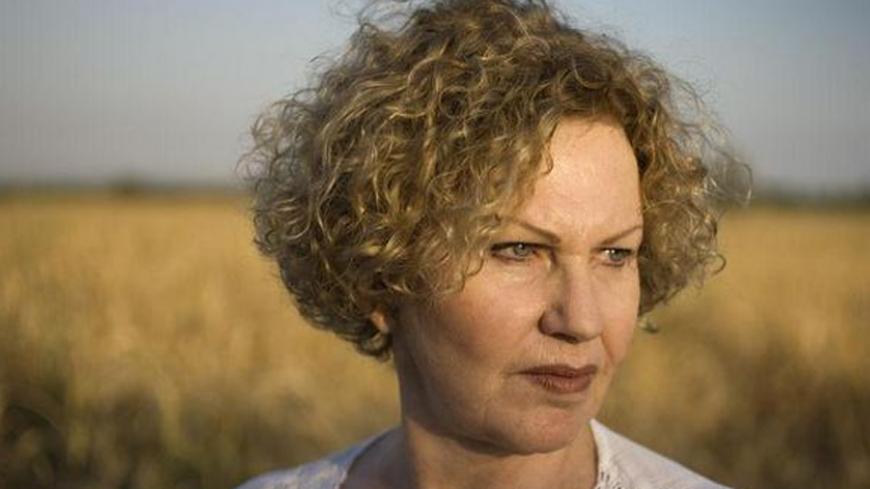 Israeli poet Agi Mishol is seen in a field in this undated portrait photo. - Twitter/@m_petrossian

Agi Mishol is one of the most prominent Israeli women poets of the recent decades. Born in Romania, she is the daughter of Hungarian Holocaust survivors. She started writing poetry in high school. Mishol's books were first published in the early 1970s, and during the 1990s she was recognized as a leading female poet in Israel — a status that she has been enjoying ever since. While writing her poetry, Mishol worked as a high school teacher and educator, and later on, as a college and university lecturer. Recently she was appointed director of the Helicon (Hebrew-Arabic) Poetry School. She divides her time between her modest home in the village of Kfar Mordechai — set amid fields, just half an hour's drive from Gaza, with farm animals wandering about, and children and grandchildren running around — and her work in the city.

Mishol was the recipient of the 1995 Prime Minister's Prize for Poetry, and the first woman poet to be awarded the Yehuda Amichai Prize for Hebrew poetry, in 2002. In 2014, she received an honorary doctorate from Tel Aviv University, and earned the prestigious international award for poetry LericiPea. She has published 15 books, including a comprehensive anthology of her poems released about a decade ago. We met in her backyard, under the shadow of a large concrete air-raid shelter, to talk about poetry, her life and everything in between.

Al-Monitor:  Isn’t it somehow surreal, writing poetry when the sirens can go off any moment and rockets are falling around?

Mishol:  Well, in fact, this shelter that you see here proved itself more than once during Operation Protective Edge [in the summer of 2014]. Quite a few rockets hit the place then, and the sirens were constantly going off. Writing poetry is like swimming upstream, against the current — counter to all that noise and commotion, regardless of the political events and wars. It is like following an underground stream. Poetry observes what everyone sees, but in a different way.

Take for example the “donkey bomb.” I read a report in the press that a donkey had been dressed with an explosive belt and sent toward soldiers of the Israel Defense Forces [IDF]. It is a metaphor that Israeli reality alone can come up with — more ingenious than any poet might think of. I could write a political poem — “Don’t throw the bombs” — and others in the same vein; however, the single poem I wrote during this war, under the heading “There were no casualties,” was about that donkey. As you can see, looking around, I have a special sympathy for animals.

Al-Monitor:  Have you been criticized by the left for not writing protest poetry against the occupation?

Mishol:  Being a poet in Israel is kind of problematic. If you don’t mobilize all your talent on behalf of political writing, you are accused of escapism. Come to think of it, it's a strange reality, given everything that is going on here, to write a poem about a bird or a flower. I hear these accusations, and I myself feel it inside. Poets who live in other countries enjoy greater freedom. Essentially, it is the question of the guns and the muses — what happens to the muses when the guns roar? I don’t think it really affects the muses. Yet, there are times when it is indeed impossible to write. I have written a poem inspired by an experience that I and my translator, Joanna Chen, went through. The two of us were sitting together, looking in the dictionary for the name of a flower — known as the wandering Jew. And then, all of a sudden, the sirens went off. We could not decide whether or not to run to the shelter; we were both alarmed — we felt the same — our alarm had no need for translation.

Al-Monitor:  You once said that you belonged to the tradition of civilian poets, as opposed to the so-called national poets.

Mishol:  The concept of a national poet is a concept of the past. It was in vogue in the last century. Still, even today, there are writers who are seen as such. [Israeli novelist] Amos Oz, for instance, as well as other authors, see themselves and are seen by others as authorities on any matter — not just on literature. As far as I am concerned, I don’t consider myself an authority on political affairs. I do believe, however, that by virtue of being a poet, you are endowed with sensitive feelers. You can sense things, perhaps even before they occur, or see them in a different way. As an Israeli citizen, I'll voice my opinion, I’ll take part in demonstrations, I’ll sign petitions, I’ll express myself. But the poetess in me has no wish to rally for any political cause; it’s something that I just don’t want to do.

Al-Monitor:  You stand in the forefront of Israeli literature and culture, and at the same time, the immigrant experience has been a formative experience for you.

Mishol:  I was born in a small village in Transylvania. My father played the piano at the local cinema, providing musical accompaniment for silent movies. I'm the only child of Holocaust survivors, who came to Israel in 1950, seeking to bring me to the safest place on earth — a place that has now become the most dangerous. Oddly enough, my “mother tongue” is not the native language of my mother, as my native language is Hebrew, while my mother's native language was Hungarian. She could not read what I was writing. By the way, one of my new poems is titled “Mother Tongue.”

Yizhar [Smilansky, a distinguished Israeli writer known by his pen name S. Yizhar] used to wonder: How could it be that you have become a poet [writing in Hebrew], although Hebrew was not the language spoken in your home, and books were not to be found around? Well, it was not my parents’ fault that they were not into reading. The Holocaust cut off that, too. It really astonished Yizhar that this [apparent] weak point of mine turned out to be my prowess.

Writing invariably stems from some pain. If you dig deep enough, you will always find an insult buried in there, or a wound, or a desire to prove something. It was not easy being an immigrant child, always shifting between languages. It is a twilight zone, so to speak. If you take a certain word in Hungarian, the corresponding Hebrew word does not necessarily have the same connotation. Yet, a child growing up bilingual develops finely honed linguistic skills, since inevitably he or she constantly translates from one language into another. When a book of mine is translated into a foreign language, it feels like my poems are taken across a border, delivered away to some far-off place. As for the readership of Hebrew poetry, I cannot tell how enduring it is.

Al-Monitor:  Would you say that Israel is a country of poetry enthusiasts?

Mishol:  Well, poetry reading is popular here, more so than anywhere else in the world; and poetry writing is even more prevalent locally than reading. Everybody in Israel seems to be writing. Indeed, given the number of residents, sales of poetry books are among the highest in the world. And composing music for poems is a unique Israeli phenomenon. There are many poetry readings and literary events taking place here. Poetry is not written with the purpose of fulfilling any role. All the same, poetry does serve as a kind of alarm clock that reminds people of their origin, or of themselves or of their conscience.

Al-Monitor:  Is there any Arab poet you are in dialogue with?

Mishol:  Yes, there is one — Salman Masalha. He is a Druze Arab poet who writes in both Hebrew and Arabic. We have even staged a show together. He is a passionate anti-fundamentalist, and I always tell him: “You are going to be the next Salman Rushdie.”

Al-Monitor:  Is there any difference between a poet and a poetess? Any particular difficulty?

Mishol:  I believe that men take themselves more seriously, and have a strong sense of self-importance. We, women, are more connected to everyday life, and have a little more humility. My male colleagues have a study, a graceful office where they write their poetry. I write in the kitchen.

Al-Monitor:  How do you go about teaching poetry writing?

Mishol:  First of all, I tell my students, if you can do without it, abandon it. It is tough. It is a most difficult path to follow — path in the deepest sense of the word. It is the central axis of existence. The next thing I am going to write is a book titled “What is a Muse?” What does it take to follow the path of poetry? There is a rule about writing: When you are writing, you have to remember everything you know and, at the same time, to forget everything you know.

Al-Monitor:  But writing is addictive, isn’t it? Could you do without it?

Mishol:  No way! As [the late eminent Israeli poet] Nathan Alterman wrote, “And the melody yet returns, the one you've abandoned in vain.” It cannot be left behind. We cannot do without it. Inspiration is tantamount to transformation — a shift over to a different state of consciousness. It just happens. It is not in my hands. It is nothing that I can summon or, for that matter, call off.