To Beirut, with love: Young poet to represent Mideast in world competition

Rabab Chamseddine, a 21-year-old Lebanese poet, is headed for Paris for the World Poetry Slam next year after winning the Beirut Poetry Slam with works that tackled notions of self and country. 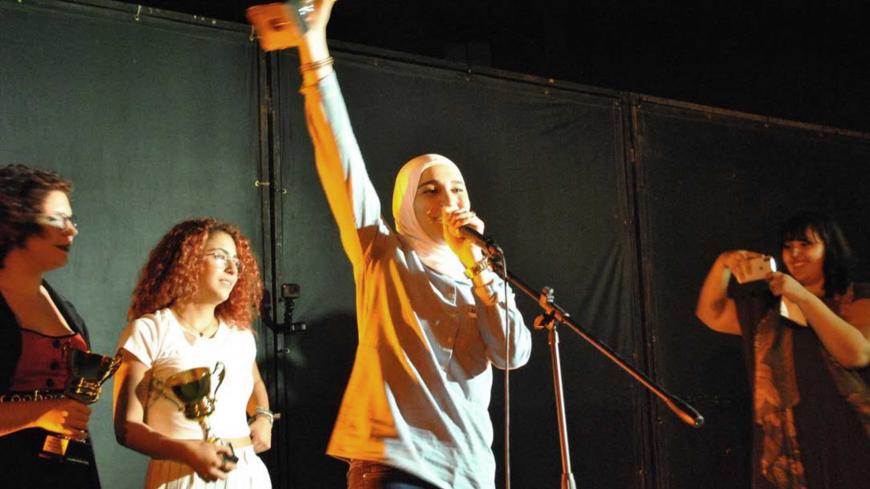 BEIRUT — Her trophy nearby and new fans offering hugs and praise, Rabab Chamseddine, a 21-year-old Lebanese poet, was riding high after her win at the 2018 Beirut Poetry Slam.

“I am feeling more than great. I just want to smash everything. I am way too excited,” she told Al-Monitor at the finals on Sept. 15 when asked about her thoughts on representing the Middle East next year at the World Poetry Slam.

Slam poetry is different from traditional spoken word performances “because it’s a competition,” organizer Maysan Nasser explained. Ten artists present two poems, each one three minutes long, and judges score their performance and content. “The contestants have nothing on stage apart from their words,” Nasser added.

Held at Station Beirut, an art space in the Lebanese capital, the event featured poets ranging from published writers to novices preforming for the first time, reading their poems in Arabic and English.

Beirut has hosted previous slam competitions, but this year’s event offered something new. The winner of the slam will travel to Paris next year to participate in the World Poetry Slam: the first ever Middle Eastern representative to compete at the event, going up against poets from Australia to Germany.

Chamseddine will be this representative, after winning over the audience and judges with her performance of “Not Your Type of Woman” and “To Honey,” heartfelt original poems exploring the complexities and fluctuations of identity in the Middle East.

Born into a Lebanese family in Ivory Coast, Chamseddine moved back to Lebanon at the age of 11. A native French speaker, she wrote her first poem, “Solitude,” in elementary school. She described it as “a very sad poem for a nine-year-old.”

However, her poetry has always been intensely personal, reserved mainly for her diary. When she turned 18, she befriended a woman named Dima, who introduced her to spoken word poetry. Only a few years into the friendship, Dima passed away.

“I had to process it [her death] and had to go through grief,” Chamseddine said. “And when I was almost over it, I wrote my first [English poem], called ‘The Long Drop.’”

Thereafter, Chamseddine sought to emulate her late friend. She started studying literature at the American University of Beirut and began writing in English.

During her studies at AUB, she performed her first ever spoken word poem in front of her creative writing class. “I wasn’t that confident about it,” Chamseddine said, “but I performed in front of my class and got amazing feedback.”

From that day forward, Chamseddine dove into poetry, writing about her identity, family, country and beliefs.

Lisa Luxx, a British-Syrian poet and one of the judges, said of Chamseddine, “She had urgency, she really meant it, she needed to say it, she was speaking with purpose, she wasn’t just speaking because she feels like writing a poem.”

Before preforming her final poem, “Not Your Type of Woman,” Chamseddine asked the audience, “Have you ever been in love with someone and no one gets it?” The question received a unanimous ‘Yes!’ from the young artistic Beirut crowd.

Her poem explores a deeply private love, her tone almost taboo. It opens:

“I’ve been in love with this woman, it’s been three years.

but we both know.

We both know if the world ends tomorrow,

running toward each other to meet God.”

Halfway through the poem she reveals, “I’m in love with a woman and her name is so safe in my mouth … Beirut.”

“I don’t see [Beirut] as a city,” Chamseddine explained. “I see it as a person who is trying to be understood. Maybe that is why I have such a connection to it, because I too want to be understood.”

She criticized those who complain about it, saying, “People say Beirut is so shitty, there are so many problems, there is so much garbage here. [but] Beirut is not doing a thing. You are ruining the city.”

Luxx, who moved to Beirut only a few months ago, attested to the effect of Chamseddine’s performance: “It had everything that made up a poem that just never left your system.”

She added, “For me, she is talking to the Western world, to the people who told me, ‘Don’t go there, Beirut is dangerous.’”

Chamseddine’s first poem, “To Honey,” was a reflection on faith and family. She told Al-Monitor, “I always bring my family and religion into my poems, because these are two things that are a part of my identity, and I am still trying to figure out who I am.”

She added that despite her introverted nature, these complex and controversial subjects can be questioned and challenged through her art. “Not all truths are to be told,” she said. “There are somethings that can [only] be expressed through poetry.”

The prospect of preforming next year at the world slam as the Middle East's first ever representative brings the young artist both anticipation and anxiety.

“It is exciting, but it is a huge responsibility,” Chamseddine said, “You are coming from a place that people don’t understand. People have such huge misconceptions about Beirut and about the Middle East. You need to make sure you are just perfect.”

Despite her dedication, the 21-year-old is conscious of entering an international stage unaccustomed to performers like herself. “The veil adds an extra thing,” she said, gesturing to her hijab. “With the rise of Islamophobia and all this, it is kind of hard to find your way in the world. Even in Lebanon you have this problem. So what about the West?”

However, the judges are confident that Chamseddine’s voice will cut through the preconceptions that surround her homeland. “I don’t think she yet sees the impact she is going to have,” said Luxx. “The important socio-political work that her poems [are] going to do.”