Palestinians are commemorating the centenary of their great poet Fadwa Tuqan, a fighter for her country and her rights as a woman. 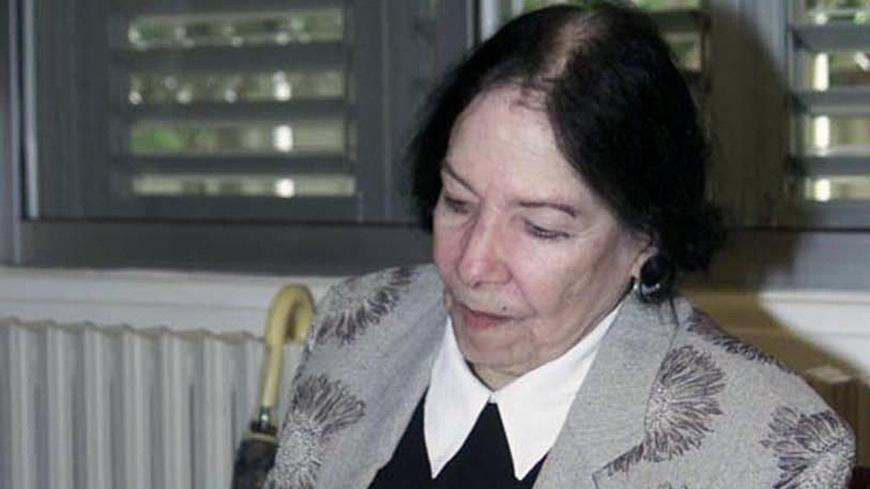 Palestinian poet Fadwa Tuqan is seen in her house in Nablus, the West Bank, in an undated photo. - AFP/Getty Images

RAMALLAH, West Bank — For many Palestinians, Fadwa Tuqan is more than a poet: She is the symbol of Palestinian resistance and pride. She is the embodiment of the spiritual strength of Palestine despite the losses they have suffered.

Tuqan, born in 1897 in Nablus, West Bank, lived through the Nakba (Catastrophe) of 1948, the 1967 war and the first intifada of 1987. Her involvement in the national struggle strengthened her writing, making her one of the most famous female poets in Palestine and the Arab world.

In one of her best-known poems, “Longing,” she expressed her sense of loss and anger in a style that Israeli Gen. Moshe Dayan described as capable of creating 10 resistance fighters with a single poem:

"Time's out and I'm home alone with the shadow I cast/ Gone is the law of the universe, scattered by frivolous fate/ Nothing to hold down my things/ My possessions have flown, they belong to others."

The celebrated poet was born in a prominent but traditional family, where Palestinian customs prevented her from continuing her education after the fifth grade. So she studied at home, along with her brother, the well-known poet Ibrahim Tuqan. She published her first book of poetry five years after his death in 1941 and called it “My Brother, Ibrahim” — an homage to the great poet and devoted brother who had kept furthering her education through letters sent to her from Beirut, where he worked as a professor.

She continued to publish her poetry books for the next two decades, in her forceful, emotion-laden style that reflected her own experience of what the Palestinians were going through: loss, sadness, loneliness, anger, resistance and Palestinian pride. In the 1960s, she became a student once more, studying English literature at Oxford University. Her works were translated to English in the 1980s, bringing her international fame and literary awards such as the United Arab Emirates' Al Owais Award for poetry in 1988-89. She published “An Autobiography: A Mountainous Journey” in 1990.

Tuqan died on Dec. 12, 2003, during the height of the Al-Aqsa intifada, while her hometown Nablus was under siege — her last poem, “Longing,” cited above, was written while she was bedridden and in deep sorrow over her hometown.

Author al-Mutawakkil Taha, who has published books both on Ibrahim and Fadwa, told Al-Monitor her life was her work and vice versa. He said, “Fadwa’s life resembles the life of the Palestinian people and the Palestinian revolution, in her capacity to stand up again and demand Palestinian rights.”

Taha added, “She lived in a conservative society that barred young women from getting an education and [participating fully] in life, but she was able to educate herself and learn through her own efforts, showing her exceptional capacity to break social and political barriers."

Between March 2017 and March 2018, Palestine’s ministries of culture and education, along with various cultural and literary groups, have organized and planned a series of events to mark the centenary of Tuqan. The Culture Ministry’s events reached a climax in November, as the poet was born before the Balfour Declaration of November 1917.

By marking the 100th year of Tuqan’s birth, the ministry hopes to draw attention to other thinkers, writers and poets from her era, said Huda Hajju, the head of the committee marking the centenary. She calls the project “a way to honor the Palestinian pioneers of culture and enlightenment.”

Hajju added, “Over the next 15 years we will dedicate each year to a poet, writer or thinker born over 100 years ago who influenced the cultural and literary life of Palestine."

Tuqan’s selection as the first to be celebrated is due both to her fame as a poet and to 2017 coinciding with the 100th anniversary of her birthday. She said Tuqan was a poet who challenged every social and political obstacle she faced, showing that poetry, literature and culture were effective forms of resistance.

The culture and education ministries organized these events in cooperation with civil society organizations from different municipalities and governorates and with literary and cultural centers from various cities, Hajju noted.

The Ministry of Education has organized several events to tell the story of Tuqan to students. The ministry’s head of student activities and spokesman Sadeq al-Khadour said the ministry started a series of events in each of its directorates in November. “We designated the day of poetry in each school dedicated to Tuqan’s poetry,” he said. “There were forums at each secondary school including talks by writers and critics looking at her life, as well as student trips to the house and neighborhood where she lived and stop-offs in the places she mentions in her poetry.”

The ministry also had two of Tuqan’s poems put to music and recorded on a CD alongside the children’s book on her life.

Taha said it is important to shed light on the lives of writers and poets as a way of reviving Palestinian culture and resisting attempts to wipe it out or misrepresent it. Attention to poets of past generations shows that Palestine has deep roots and that Israel's false claims cannot wipe out this people and its culture, he said.

“The young generations don’t know many of their own stories and it seems they have little knowledge of the [past generations],” he said. “These efforts are a way of reviving Palestinian collective memory, so that the Palestinians will know of their cultural heritage, which will help them remain and resist the occupation and its attempts to dissolve Palestinian identity and personality.”

He also recognized the importance of the efforts by the ministry and other institutions to tell Tuqan’s story, underlining that more such initiatives are needed. “We need lots of different mechanisms to elevate and display the Palestinian creativity and heritage and bring our creative models into the mainstream,” Taha concluded.