The Palestinian cause is omnipresent in the minds of Arab and world peoples thanks to renowned poet Mahmoud Darwish, whose work is still widely appreciated seven years after his death. 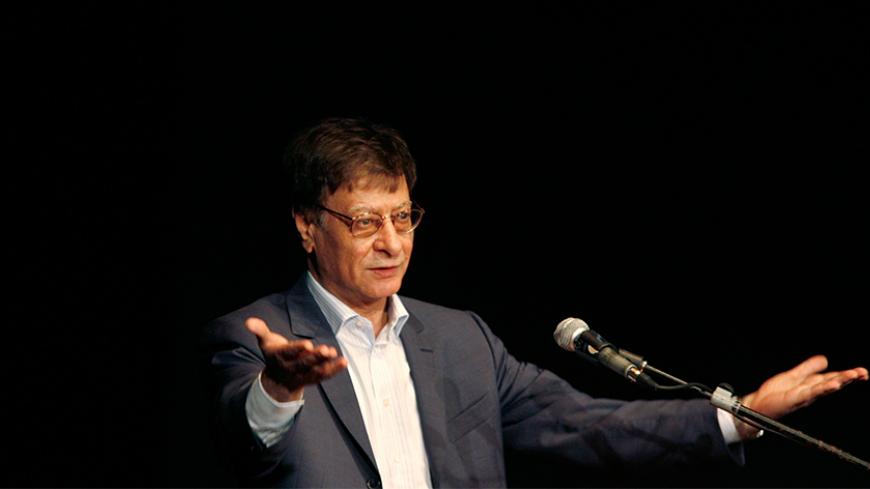 Palestinian poet Mahmoud Darwish was born on March 13, 1941, in the Galilee village of al-Birweh. Darwish’s birthplace has now been replaced by Jewish settlements. Moshav Ahihud and Kibbutz Yasur now sit where the Palestinian village once stood in northern Israel, east of the port city of Acre. Today, 75 years after his birth, Darwish is being recognized as an Arab international literary icon.

“He was a symbol of the Palestinian struggle and reflected Arab culture. His works and his values encompassed not only his love and defense of Palestine, but also his Arab and universal outlook,” Darraj said.

Darwish embodied the Palestinian revolution like no other poet and was closely associated with the Palestine Liberation Organization and its leader Yasser Arafat. His 1982 poem “Why did you leave the horse alone?” reflected the Palestinian bitterness at Arab abandonment after the Israeli invasion of Lebanon. He was elected to the PLO’s Executive Committee in 1987, but resigned in 1993 after the signing of the Oslo Accord.

In explaining his resignation, Darwish said that he opposed not peace with Israel, but the absence of a mechanism for genuine peace and independence. He complained that there was no link between the interim period and a final status and that Israel didn’t make a clear commitment to withdraw from the occupied territories.

While Darwish became the poet of the revolution and an Arab cultural idol, his work was essentially humanitarian, says Darraj. One of Darwish’s most known poems “Umi" ("My Mother"), in which Darwish talks about how he misses his mother’s bread and her coffee, was turned into a popular song by Lebanese singer Marcel Khalife.

“He never wanted to be restricted to Palestine or the Arab world, but wanted to reflect a much wider universal value,” Darraj added.

The Darwish Foundation’s literary prizes for 2016 went to Palestinian poet Ghassan Zaqtan, Lebanese novelist Elias Khoury and American writer Alice Walker. Zaqtan is credited with a special ability to connect popular Palestinian culture with international and modern literature. Khoury’s novels, 10 of which have been translated into other languages, often deal with Palestine. Walker, a Pulitzer winner, deals with issues of racial discrimination in her creative works.

Between the establishment of Israel and 1966, Palestinian citizens of Israel lived under a strict military rule that included constantly being subjected to security checkpoints. One of the early poems that made Darwish a household name in the Arab world, “Identity Card,” was written in 1964 and addressed the military rule of Palestinian citizens in Israel. The poem told of constant demands by Israeli security officers for Arabs in Israel to show their ID cards.

Darwish left Israel for Moscow in 1970, but was quickly disillusioned and publicly distanced himself from communism long before the fall of the Soviet state. He then lived in Cairo, Beirut and Paris. Ironically, the Oslo Accord, over which Darwish had resigned from the PLO, was his ticket back to Palestine. He returned to Palestine in 2007 and lived in Ramallah but didn’t spend a lot of time there.

Darwish died Aug. 9, 2008, in Houston, Texas, during an open-heart surgery that he knew was risky. Three days of mourning were observed in Palestine, and the Mahmoud Darwish Foundation was established Oct. 10, 2008, by a presidential decree “to safeguard Darwish’s cultural, literary and intellectual legacy and promote his noble values: the love he had for his homeland, deep respect for human dignity and his utter veneration of life.”

The Mahmoud Darwish Foundation was headed by the poet’s colleague and friend Yasser Abed Rabbo, who had been the secretary of the PLO’s Executive Committee since 1971. In July 2015, Palestinian President Mahmoud Abbas, chairman of the PLO’s Executive Committee, removed Abed Rabbo from his position. Six months later and after Abbas was unable to reshuffle the executive committee to kick Abed Rabbo out, he removed Rabbo and 24 other board members from the Mahmoud Darwish Foundation.

At the time, Abed Rabbo was quoted in the London-based Arab daily al-Hayat as saying that the decision was a “political, legal and a national breach and will have consequences.” The Darwish family also commented that the family should have been consulted before the decision to change the board was made.

Ziad Abu Amer, the former Palestinian minister of culture, was appointed chairman of the foundation in December 2015, replacing Abed Rabbo.

Al-Mutawakel Taha, a well-known Palestinian poet and founder of the Poetry House in Ramallah, told Al-Monitor that the presidential decree that created the Mahmoud Darwish Foundation states that its board of trustees should be regularly rotated. The former board served two three-year terms and failed to initiate a rotation system, Taha explained.

However, Taha insists that the problem was not the rotation of the board membership, but the criteria of membership. He said, “Both the old and new board of trustees of the Mahmoud Darwish Foundation are made up mostly of political and business figures and not figures from the cultural and literary worlds.”

In the past 75 years, Arabic literature and world libraries have been filled with the works of a Palestinian born in a village that no longer exists. One of Darwish’s books, “Absent Presence,” refers to the Palestinians who fled their homes in 1948 but remained within the area that became the state of Israel and are treated legally as "absentees."

Thanks to the creativity of Darwish, the Palestinian cause is still fresh in the minds and hearts of people around the world. With every passing year, students of Arabic literature continue to be mesmerized by the prolific production and distinctive composition that made Darwish one of the best loved poets of the Arab world.