Why this Palestinian poet still sparks controversy in Israel

For many Israelis, Palestinian poet Mahmoud Darwish is the symbol of Palestinian resistance and struggle, who, even after his death, keeps raising strong emotions among Israelis across the political spectrum. 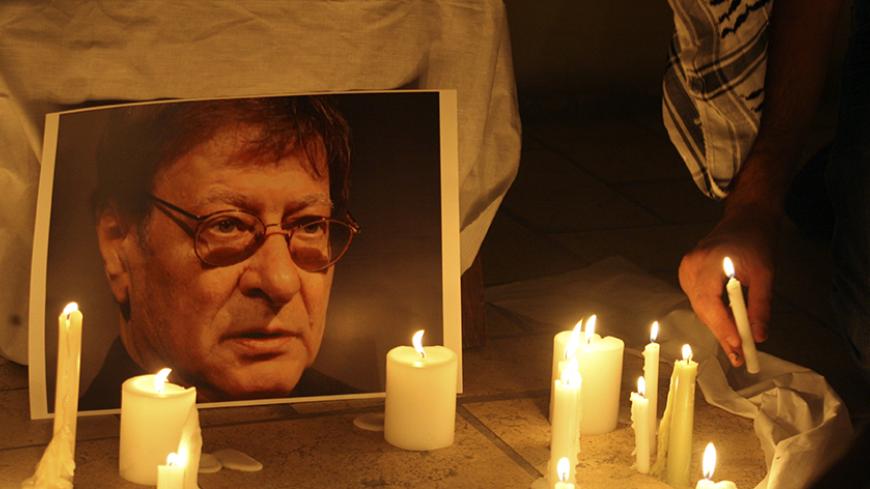 A candle is placed in front of a picture of late Palestinian poet Mahmoud Darwish, during a candle-lit vigil in Amman, Aug. 11, 2008. - REUTERS/Ali Jarekji

March 13 marked the 75th anniversary of Palestinian poet Mahmoud Darwish, who passed away on Aug. 9, 2008. A special event was held in Tel Aviv to commemorate the anniversary with the participation of both Jewish and Arab musicians, poets and actors.

Darwish, who published dozens of poetry books, all revolving around the central motif of Palestinian yearning for independence, is well-known in some sectors of Israeli society — even more so than many of his Israeli counterparts. His efforts as a public figure tower over his endeavors as a poet. He was a Palestine Liberation Organization (PLO) activist and was seen as a major political symbol. In the eyes of many, he represented the moderate Palestinian voice — the one that Israelis called a "partner" to the dialogue — before allegedly adopting a radical stance. In 1988, the translation into Hebrew of his poem "Passers between the passing words" was published, calling on the Israelis to leave the country and "Live wherever you like." Following the publication, Darwish became an emotionally charged symbol, on both sides of the Israeli political map.

"Darwish is one of the first five names that come to mind when thinking of what is 'Palestinian,'" Israeli poet Ronny Someck told Al-Monitor. "In this sense, I salute the Palestinians; they have put poetry at the forefront. I wish the word 'Israel' would evoke similar associations of, let's say, [Israeli poet Nathan] Alterman, alongside names such as [first Israeli Prime Minister David] Ben-Gurion or [former Minister] Moshe Dayan."

When late Yossi Sarid, in his capacity as education minister, sought to include Darwish's poems in the Israeli high school curriculum in 2000, it caused a furor across the country. The issue was discussed in the Knesset, and ultra-Orthodox Shas Knesset member Yair Peretz charged that Sarid sought to eradicate the heritage of Israel. Yitzhak Gagula, another Shas Knesset member, went as far as to label Darwish "an archenemy." It was not until 2012 that Darwish's poems were introduced to the curriculum in Arab schools in Israel.

The name "Darwish" triggers a burst of emotions among Israelis. "People see Darwish as part of the Palestinian national movement, next to the pre-Oslo [PLO leader] Yasser Arafat," said Middle East expert Yechiel Shabi. "The two are seen as precursors of the murderous Palestinian movement and [as advocates] of nationalism who justify violence. This is something that they [Israelis] find difficult to cope with."

In November 2014, musician Danielle Ravitzki described on her Facebook page a shocking incident in which she had been attacked in a bookstore when she asked to buy a book of poems by Darwish. The assailant, another customer she did not know, accused her of "supporting terrorism."

Yael Lerer, head of the Andalus publishing house, which published three of Darwish's books translated into Hebrew, told Al-Monitor, "Only 2,000 to 2,500 copies of Darwish's most popular book have been sold in Israel, and maybe I'm exaggerating. [Darwish] is an empty symbol. All that he signifies is the Nakba [Catastrophe in Arabic, describing the 1948 war] and the relationship of Palestinians to their land. We published his first book just after the Sarid uproar. We reckoned that if everyone was arguing about his poetry, they should at least be given the opportunity to read it. However, there was no demand for the book and it hardly got any reviews. When Darwish visited Haifa [in 2007], it triggered a public outcry and dispute on whether he should be allowed entry. The affair was the talk of the day and captured the front pages of the local newspapers. But even so, we managed to sell only a few copies then. His name is better known than the number of his actual readers."

A week after Darwish died, in an article in Israeli daily Haaretz, Lerer urged her readers to read Darwish. "We were, among others, his target audience. Many of Darwish's songs are aimed directly at us, Israeli Jews," Lerer wrote, "but we would not listen to him."

Someck, who teaches literature and takes care to include Darwish's poetry in his curriculum, said, "Israelis see Darwish the way they see Palestine. There are those who believe in a binational state and think there is a chance for peace. They say, 'Let's study their poets, to understand who we are going to live with.' And there is the other side, who says. 'We will always be at war [with them].' For the latter, he is the poster boy of Palestinian nationalism. The way they see it, there are those who pull the trigger and those who use their pen and write lyrics that encourage pulling the trigger. These are people who have not read his poems, apart from some lines cited by others who portray Darwish as a monster."

Someck chooses to teach Darwish's political songs in which he addresses peace. "Peace is an elegy said over a young man/ whose heart’s been torn open/ by neither bullet nor bomb/ but the beauty-spot of his beloved," Someck quotes in excitement out of "State of Siege." He added, "Darwish is a poet whose words could be sprayed as graffiti on a wall shattered on the crossing point between 'poetry' and 'life.' He is a poet who knows how to turn words into a fist — give up on the soft lining within the boxing glove and hit the reader in the face."

Shabi argues that Darwish is a genuine 1948 refugee, who embodies the Palestinian yearning to return to the land. He said, "A large part of the so-called Palestinian population actually immigrated to Israel. Darwish is a refugee, a displaced person. He is watching his deserted village from afar, but unable to return home. And he can thus understand the pain and express it in words. It's with his passionate poetry that Darwish created the Palestinian identity from scratch."

Shabi maintains that the deep anger aroused by Darwish in Israel may actually be attributed, at least in part, to feelings of empathy and jealousy. "We see here an authentic person who passionately speaks up. This is something that inspires fear, and at the same time, both empathy and jealousy. 'Why are we not like him?' Israelis are not afraid of Palestine or Iran, but rather of the Arabs living in Israel, [and] of an in-house flare-up. Darwish exerts such a forceful influence."

For Lerer, Darwish is more than that; he is like a mirror showing Israelis the painful reality. She said, "We wanted Mahmoud Darwish to be the nice Arab guy, but he reminds us that he is a Palestinian — one who has a well and a fig tree and the house of his grandfather. And as much as Israel would have liked to eliminate his legacy, he cannot be erased from memory. He is an Israeli citizen by virtue of birth — hence the deep-rooted symbolism. He confronts us with the Palestinians, Palestinian nationality and the Nakba in a way that cannot be ignored. For us Israelis, it is intolerable."