Palestinian writers rejoice as one of their own wins 'Arab Booker'

With his dystopian novel “The Second War of the Dog,” Ibrahim Nasrallah won the 2018 International Prize for Arab Fiction in yet another victory for Palestinian literature. 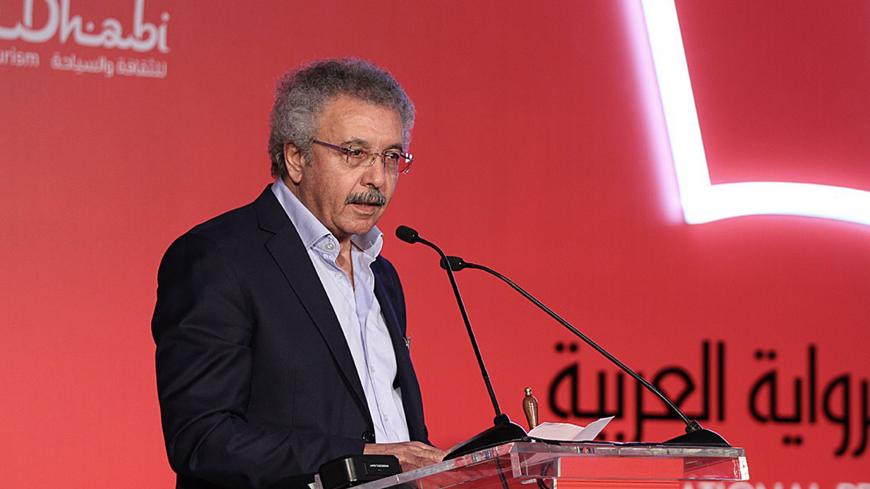 RAMALLAH, West Bank — By winning the 2018 International Prize for Arab Fiction (IPAF) with his dystopian novel “The Second War of the Dog” on April 24, Palestinian author Ibrahim Nasrallah has reasserted the presence of the Palestinian novel in the Arab literary scene. Nasrallah and three other Palestinian writers had been nominated for the Arab world’s top literary award, demonstrating the variety of emerging fiction writers of Palestinian origin.

Nasrallah already enjoys literary fame at home and abroad. Several of his 13 novels — most of which are historical — have been translated to English and other languages. He has also published 14 collections of poetry and two children’s books. Born in 1954 in the Wihdat refugee camp in Jordan, he studied in schools run by the United Nations Relief and Works Agency for Palestine Refugees and worked as a journalist in the 1980s and 1990s. Nasrallah has also acted as director of cultural activities at Darat al Funun, which is a home for the arts and artists from the Arab world and is part of Amman's Khalid Shoman Foundation, of which Nasrallah is vice president.

The Jordanian-Palestinian writer was previously nominated for the IPAF twice. One nomination was in 2008 for “Time of White Horses,” which follows several generations in a village under Ottoman, British and Israeli rule.

Ironically, the novel that finally took the prize on April 24, the eve of the Abu Dubai International Book Fair, was unlike any of his other works, which cover Palestine's past and present. “The Second War of the Dog,” a 340-page novel published by Arab Scientific Publishers, takes place in an unnamed country in a dystopian future. It focuses on human savagery through the radical transformation of its antihero Rashid from an opponent of the regime to a corrupt extremist after he befriends a security officer, a die-hard opportunist who uses the system to achieve his own interests. While it takes place in the future, the allusion to the current reality of war, murder, repression and atmosphere of fear is all too clear.

Nasrallah acknowledges that his novel is a warning, saying after his nomination was announced, “The novel was written to provoke the reader, to worry the reader, to even, sometimes, make them breathless. [It] is, in my opinion, a warning of what we could become in the future. … The novel starts off at the moment of a loss of certainty, that loss of trust in those whom you interact closely with — that neighbor, brother, father or whoever it may be. The novel suggests that if we continue on our current path, we will reach a future where we would become mostly annihilistic.”

The IPAF, which is run with the support of the Booker Prize Foundation in London and funded by Abu Dhabi's Department of Culture and Tourism, has been awarded since 2008. The prize is often referred in the press or literary circles as the “Arab Booker," although the IPAF and the Booker Prize Foundation are two separate, independent organizations. The IPAF is also not connected with the Man Booker Prize. Sometimes, though, the two have the same literary works on their lists; for example, the 2014 IPAF winner, “Frankenstein in Baghdad” by Ahmed Saadawi, is one of the six novels shortlisted for the 2018 Man Booker International Prize.

For winning the IPAF, Nasrallah was awarded $50,000 and funding for an English translation of the book. But this was far from the only Palestinian name among the 124 nominated novels representing 14 Arab countries this year. That list featured four Palestinian novels, and the shortlist included Walid Shurafa’s “Heir of the Tombstones.” Shurafa described his novel to IPAF as one whose mission was “to reject fundamentalism and champion the experience of the Palestinian people, who paid the price for these religious narratives.” The two main characters are an innocent orphan and a historian.

“Nasrallah’s victory is a victory for Palestinian novels in the Arab world and internationally,” Palestinian Authority Minister of Culture Ehab Bseiso told Al-Monitor. He added that that two novels' shortlisting attests to the strength of the Palestinian narrative and the creativity of the writers in sharing it.

Bseiso asserted that this victory has contributed to drawing attention to the political and cultural challenges of the region, saying, “It shows that the Palestinian people do not give up. The Palestinian novel has proven its ability to narrate different topics, evolve in the techniques it uses and gain power and momentum in the Arab and international arena.”

Palestinian writers who have made the IPAF list throughout the years include Rabai al-Madhoun, the first Palestinian to win the award in 2016 with his book “Destinies: Concerto of the Holocaust and the Nakba.” The writer, who works as a newspaper editor in London, was shortlisted in 2010 for another novel, “The Lady From Tel Aviv,” which has been published in English.

Jamal Naji, a Palestinian born in Jordan’s Aqbat Jaber refugee camp, was shortlisted in 2010 for “When the Wolves Grow Old,” a novel of wealth, politics and greed. Other nominations include award-winning writer Mahmoud al-Rimawi with “Who Will Keep Her Company” and Sahar Khalifeh with “Origin and Branch.”

In 2016, Palestinian writers had much literary success. Nasrallah’s "The Kilimanjaro Souls" and Yahia Yakhlaf’s "Windsurfer" were shortlisted for the Katara Prize for Arabic Novel in the “published novel” category. This UNESCO-sponsored and Qatar-based prize offers $60,000 to everyone who makes the shortlist. The same year, Palestinian-Icelandic writer Mazen Maarouf won the Al-Multaqa Prize, the first major pan-Arab prize for short stories, with his collection “Jokes for the Gunmen.” Palestinian author Ziad Khaddash was also on the short list of five with his collection of short stories, “Good Reasons to Cry.”

Director of the Literature and Publication Department at the Ministry of Culture Abdul Salam Attari, who is a poet himself, told Al-Monitor, “The Palestinian novel has regained respect and appreciation in the past years by collecting a number of international and regional awards. This proves that the Palestinian cultural discourse can still be creative.” He added that Palestinian novels are part of a tradition that started in the 1960s and ’70s, with internationally recognized names such as Mahmoud Darwish and Samih al-Qasim.

Attari believes that what distinguishes Palestinian novels is their realism regarding the Palestinian cause and its possible solutions. “Since we are under occupation, the Palestinian cultural discourse is still a resistance one,” he said.

Palestinian novelist Atef Abu Saif, who was a 2018 IPAF nominee for his novel “Christina," told Al-Monitor that Nasrallah's victory demonstrates the strength of Palestinian fiction. "What the Palestinian narrative presented is not limited to national and political issues, but talks about love, human rights, human values ​​and love of life in a Palestinian context," he concluded.