Arab-Israeli Knesset member Issawi Frej aspires to make Arabic literature accessible to the Israeli public and promotes an initiative for an annual public prize, to be given to Israeli authors writing in Arabic. 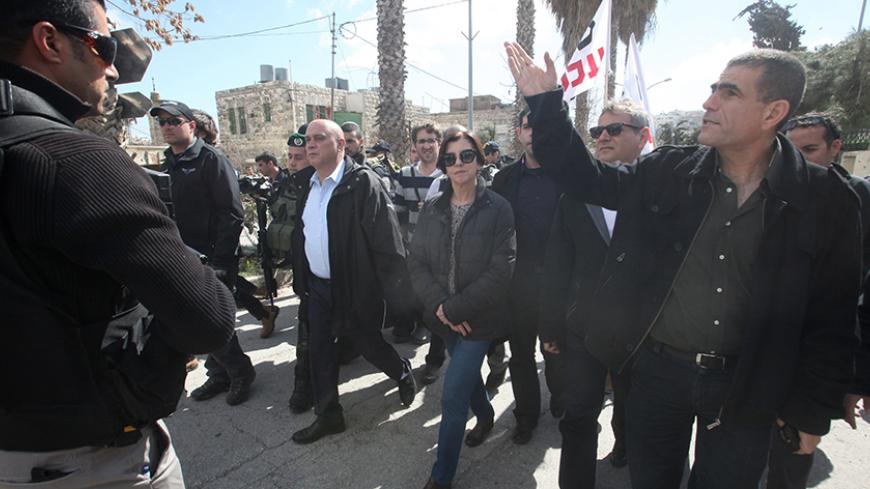 Israeli Meretz Party members Nitzan Horowitz (2nd from R), Zehava Galon (C) and Issawi Frej (C-L) take part in a visit of the "Al-Shuhada" street in the West Bank city of Hebron in support of Palestinians who were forced out of the old quarter by the Israeli army at the outset of the second Palestinian intifada, Feb. 25, 2014. - Getty Images/Hazem Bader

Israeli-Arab Knesset member Issawi Frej organized on June 10 a gathering in the Knesset in honor of the Arabic Book Festival, an initiative to create public events related to Israeli-Arab-written prose and literature. But even though the Likud Party's newly appointed minister of culture, Miri Regev, declared that she will be “the minister of culture for everyone," she didn’t come. In fact, only nine members of Knesset participated in the event, just one of them from the coalition. “There’s a deafening silence from the minister of culture,” Frej told Al-Monitor. “But we will bring the issue to her agenda. I expect that the people of the book [in reference to the Jewish people] will also be a light to the gentiles.” Regev has yet to respond.

Under these circumstances precisely, when the issue of Arab culture has become such a sensitive one, and in view of the prevailing tensions between Israeli Jews and Arabs, Frej wants to advance the status of Arabic literature in Israel. “I called the process 'Books Build Bridges,'" he said. “In the difficult reality of Jewish-Arab relations in Israel today, a reality of separation, tension, nationalist discourse and discourse of hatred, we have to find something that connects the different groups that compose Israeli society. Culture, language and literature are just the ticket.”

According to Frej, he dreams of an Israeli book week, not a Hebrew book week. “Fans of Arabic literature deserve to participate in book week,” he said. “I was at a bookstore with my son, and they have a table of Hebrew children’s books. A Jewish kid comes in, walks up to the table, leafs through books, reads, chooses and asks mom to buy one. I want my son to have the same kind of experience. While the Arab sector has some private initiatives, I want something state-sponsored — a book bazaar throughout the country with the participation of schools, including a project to encourage reading — for an Arab kid to get the same opportunities as a Jewish kid — access to books in his mother tongue.”

Frej's initiative includes several elements, the most interesting of which is the establishment of a literary prize equivalent to the Sapir Prize for Hebrew Literature, to be given to an Arabic-language work written in Israel. Frej also introduced a bill for the establishment of a digital database of Arabic literature written in Israel and wishes to start an Arabic book week. “I want the big bookstore chains, which represent 80% of the book market, to devote a corner to Arabic literature, like they do for English and Spanish literature,” he said.

Frej is not the first to call for a prize for writing in Arabic. Last year, after the Sapir Prize winner was announced, an editorial in Haaretz daily called for a prize to be given also for a work in Arabic. The Israel State Lottery, which grants the most prestigious annual literary award in Israel, has not accepted the challenge, but did something else: After the prize was awarded in January 2015 to author Reuven Namdar, who lives in the United States and writes in Hebrew, the prize was restricted to authors who live in Israel. There are some who felt that this step is indicative of a trend toward withdrawal and nationalism and a tendency to stay within Israel's borders. And they fear that this trend could, among other things, undermine the chance for support for Arabic-language works in the framework of the prize.

For beginning authors who live in Israel and write in Arabic, there are few options for support, prizes or fellowships. The Prime Minister's Literary Award for authors who write in Arabic is generally awarded to more established authors. In addition, it is sometimes awarded to Jewish authors who write in Arabic, such as Iraqi-born Jewish novelist Samir Naqqash or Iraqi-born Jewish poet Avraham Ovadia. Arab author Mahmoud Abbasi, who won the prize in 1983, got this recognition from the Israeli establishment mostly for his enterprise translating works from Hebrew to Arabic in order to bring the Arabic reader closer to Hebrew literature.

The Ministry of Culture awards authors who write in Arabic 10 annual grants of 50,000 Israeli shekels ($13,000). “But I want an equivalent to the Sapir Prize, something special and big,” Frej said. Author Tamer Massalha agrees. He told Al-Monitor, “As hard as it is to make a living as an author writing in Hebrew, it’s that much harder [for those who write] in Arabic. There’s not a lot of support, and there’s not much awareness of the options for support.”

Author Ala Hlehel said in an interview on Israel's Channel 10 TV talk show "London & Kirshenbaum" on June 10 that there are no big bookstores in Israeli-Arab cities but only a handful of private stores “that are a weird hybrid between stationery stores, Toys R Us and bookshelves.”

Massalha said that there are practically no publishers within the Israeli-Arab sector and that many Arabic writers are forced to turn to publishers in other countries.

Yiftach Dekel, CEO of Israeli publishing house Keter, told Al-Monitor, "In my opinion, all Israeli publishers love to publish books for the Arab public, to translate books for these readers and to sell them books. We would have liked to do that, both as a principle and in financial terms. But when you examine purchase and sales, you notice that public demand within the Arab sector is low. As a result, there are but few bookshops in [Israeli-] Arab cities. The target audience is not interested enough. This is the trend on the ground. The reality. We would also love to export books written in Arabic to Arab countries, but that's a different story all together."

Massalha said that authors from Israel who write in Arabic often turn to philanthropic cultural organizations in Palestine, as well as in Arab countries such as Lebanon, Egypt and others “where they give support, but not much." He added, "In recent years, we have more openness to the Arab world and the Arab world is more open to us. For a long time there was a rift between us, and thanks to the technological revolution there’s more closeness and awareness, relations between authors, publishers, readers. It helps the cultural and literary scene. It creates options for getting grants and connections with publishers.”

Massalha chooses to write mostly in Hebrew, and not only for financial reasons: "It's a strategic choice to write in the very language of those who want to silence us and not recognize us. I write Arabic in Hebrew.”

He winces at the idea of the prize proposed by Frej. “Anything that makes the Arabic book more accessible to the Arabic-reading audience in Israel — the book week idea, a database, bookstore chains — is good. But the idea of the prize is problematic. If the funding comes from external sources and not the government, that would help my initial hesitation,” he said. "But here the decision to award the Sapir Prize only to an author who resides in Israel is a clear expression of the spirit of the times. The government is interfering with semi-governmental and private bodies; it tries to silence and scare and indoctrinate in what to think and say. In my eyes the devil is in the details: Who will be the judges? What is their political orientation? How well connected are they? These are difficult questions. Thus I don’t dismiss the prize, but I’m wary.”

Frej said, "You'll always find criticism on the Arab street.” He added that the prize would be open to Arabic writers in Israel and not to Palestinians living in the West Bank or Gaza Strip. He emphasized, “Also to Jews who write in Arabic. Maimonides wrote in Arabic! I want to give proper prestige to writing in Arabic, that’s all.”

Next month, Frej has organized plans for a delegation of Jewish and Arab authors to meet with President Reuven Rivlin. “We have a president for everyone, who is attentive. I believe he will give a tail wind to this initiative,” Frej said.