Many Palestinians from Gaza are leaving the besieged enclave for Turkey in search of better living conditions. 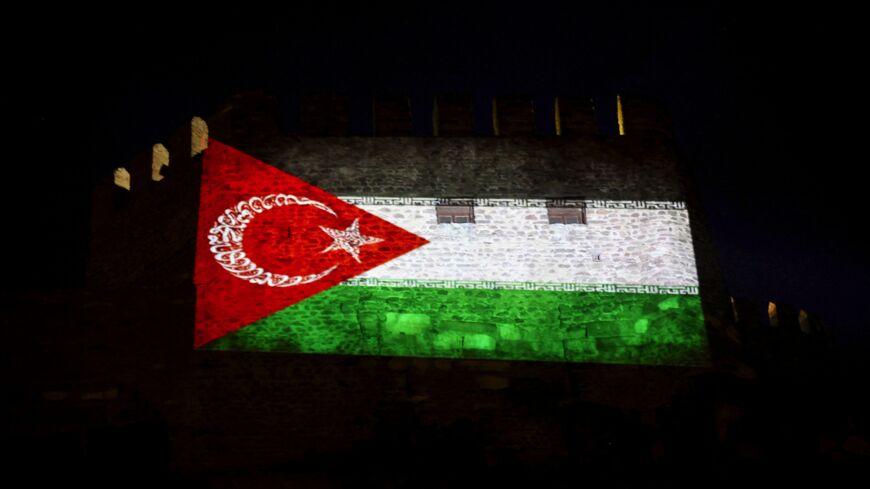 This photograph taken on May 14, 2014, shows a Gaza-Turkey solidarity flag projected on a wall of Ankara Castle in Ankara. - ADEM ALTAN/AFP via Getty Images

Many Gaza Strip citizens have recently moved to Turkey in search of job opportunities and better living standards amid the deteriorating economic conditions in the besieged enclave.

The facilitations offered to obtain a Turkish visa and reside within Turkish territory make Turkey a top destination for Gazans.

Thousands of Palestinian families in Gaza have Turkish origins. Khaled al-Katib, a Palestinian citizen of Turkish origin, told Al-Monitor, “Our family originates from the Turkish city of Izmir. My grandfather, who was in the Ottoman army, was dispatched to Palestine where he settled and formed his own family. Decades later, I headed to Turkey to look up our family tree. Official papers showed that we are of Turkish origin. I applied for Turkish citizenship, and now I am in the process of obtaining it.”

He explained that “holding Turkish citizenship has many benefits such as free education and health care and the right to own property."

Al-Monitor spoke to Metin Kaya, a Turkish citizen and a reporter for Anadolu Agency who has lived in Gaza for nearly nine years. He said, “I was born in Istanbul in 1991. I came to Gaza in 2008 when my father worked with Turkey's Humanitarian Relief Foundation (IHH) in Gaza. In 2012, I married a Gazan woman. I did not feel big differences between the Palestinian and Turkish societies, and I quickly integrated with the Gazan society.”

He added, “Although the Gaza Strip has an unstable security situation, unlike in Turkey, I love it very much. I got a severe hand injury on the first day of the return marches in October 2015 while covering the events in the Nahal Oz area, east of Gaza City, despite wearing a press jacket.”

The history of Palestinian-Turkish relations is traced back to the Ottoman Empire that ruled the Arab world, including Palestine, for four centuries from 1517 until its fall in 1922.

In the eyes of many Gazans, modern Turkey under the Justice and Development Party (AKP) represents a model of moderate and modern Islamic rule. It is seen as a great Sunni power in the Middle East region, which is why it has become an attractive destination for Palestinians seeking stability in a country with somewhat similar cultural, social and religious values.

In turn, historian Nasser al-Yafawi told Al-Monitor, “There are many Palestinian families with Turkish origins such as al-Gharbawi, Tarzi, Turk, Birkdar, Jukmadar, Radwan, Jasir and al-Jamasi. Also family names ending with the letters ‘ji’ are often of Turkish origin, such as al-Batniji and al-Shorbaji.”

He continued, “Turkey has left numerous cultural legacies in Gaza, with more than 1,100 Ottoman words still used in the Palestinian dialect such as ‘Bek,’ ‘Pasha,’ ‘Effendi,’ ‘Saraya,’ ‘Maqam’ and ‘eczane’ (Turkish for pharmacy). Also, several Turkish cultural customs have been maintained in Palestine, such as hospitality, the use of blue evil eye beads and taking off shoes at the door.”

Also, Turkish archaeological sites in Gaza show the extent of the close relations between the Ottoman civilization and the Palestinians, such as Al-Rifa’yia fountain, Katib al-Wilaya Mosque and Hamam al-Sammara. In 2015, several Ottoman coins were unearthed in the Shujaiya area.

Meanwhile, it is believed that Gaza housed more than 200 arched alleys built during the Ottoman rule, with only few remaining today, while 200 ancient Ottoman-style houses remain intact to this day.

“Since the Ottoman rule, Turks believe they are the guardians of Palestine. Now, the AKP, which promotes Islamic values, is showing strong support to Hamas in Gaza, whose ideological parent organization is the Muslim Brotherhood.”

Abu Sada added, “In Istanbul there is a street called Gaza Street and a square named Palestine Square. This is a sign of strong mutual historical heritage and a shared ideology. The Turks feel they have a moral obligation to support Palestine.”

On Turkish projects supporting Gaza’s economy, Al-Monitor contacted a number of Turkish relief organizations located in the Gaza Strip and Ramallah, including the IHH, the Palestine-Turkey Friendship Hospital and the Turkish Cooperation and Coordination Agency (TIKA).

These organizations spoke about the nature of their work and programs, which mainly focuses on relief projects rather than development projects. The organizations receive the names of poor families in Palestine from the Ministry of Social Affairs. They provide food aid and other commodities for the poor and needy, school supplies for the orphans and money for those whose homes were destroyed during the latest Israeli aggression on Gaza last year.

TIKA, for its part, offers aid in the education, health and archaeological fields, and it conducts infrastructure projects. The association also built the Palestine-Turkey Friendship Hospital in Gaza

Al-Monitor also reached out to the Turkish-Palestine Friendship Association in Ramallah, which is the only Turkish association that offers development projects in Palestine.

Samir Abu Mudallalah, an economics professor at Al-Azhar University, spoke to Al-Monitor about the noticeable Turkish role in the Gaza Strip, especially in terms of supporting institutions and universities. “Turkey has implemented tangible relief projects and infrastructure projects. We hope the future projects will be development projects and not only relief projects whose impact is temporary. Development projects can curb unemployment and alleviate poverty.”

He added, “Turkey is a commercial outlet to the Gaza Strip, as it has become one of the favorite destinations for Gazans seeking better living conditions abroad. Many Gazan merchants are working with Turkey, and this certainly breaks Israel's economic hegemony over the enclave.”

Update: Jan. 19, 2022. This article has been updated since its initial publication.