Gazans thankful for Qatar funds, worry about the future 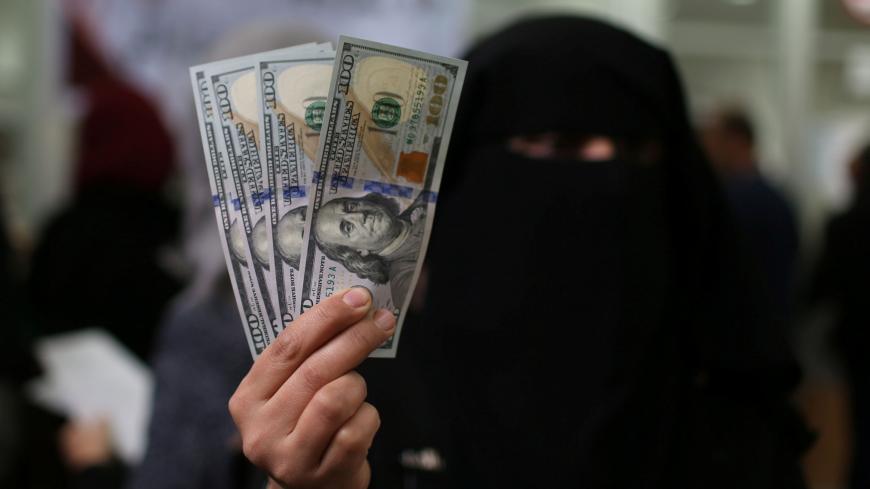 On Dec. 6, Qatari envoy Mohammed al-Emadi crossed from Israel into Gaza to deliver $15 million in cash, the second installment of his country’s six-month aid package for the Strip. The following day, using part of the Qatari grant, Hamas paid the wages of thousands of its employees.

Prior to the delivery, Israel and the Qatari ambassador negotiated over how to transfer the funds. On Nov. 8, Hamas disseminated photos of suitcases stuffed with cash arriving in the Strip in order to show the world that the Islamist organization ruling Gaza had been successful in bending Israeli Prime Minister Benjamin Netanyahu to its will. The documentation did, indeed, embarrass Netanyahu, who came in for harsh criticism both from the political right and the left for giving in to Hamas blackmail in return for its pledge to prevent Palestinian rioting along the Gaza border fence with Israel. Avigdor Liberman, who resigned as defense minister last month over Netanyahu’s Gaza policy, called the payments “protection” money.

This time, little documentation of the transfer was published. There were pictures of Emadi entering the Strip and photos of long lines of Palestinians waiting outside Gaza banks for “a bit of oxygen,” as they described the cash infusion, with a slight smile of relief. Thus, the Qataris completed the second round of monthly funding out of the six transfers they pledged.

Some 30,000 civil servants received sums ranging from $100 a month for junior workers to $1,600 for senior ones. Part of the money went to pay monthly stipends to the needy, among them war victims and family members of those killed in war.

According to Netanyahu, Israel is overseeing the transfer of funds to Gaza residents to ensure the money does not go to the armed wing of Hamas or anyone serving in its security apparatus. “When the money came from Qatar, we said we want to supervise. You want the money? We want a photocopy, signature and fingerprint (of each recipient). The Qatari envoy passes along these data in an organized fashion, and this is how we know where the money is going,” a senior Israeli official told reporters. Netanyahu accused Palestinian President Mahmoud Abbas of imposing sanctions on Gaza that resulted in a humanitarian crisis that threatened also to harm Israel. “There’s no choice but to do so (let in Qatari funds) to prevent a humanitarian collapse. We are now in a lull and I don’t know if it will continue. Our condition for a cease-fire arrangement with Hamas is a solution to the issue of our captives and missing, and supervision (of entry of goods) through Cyprus,” Netanyahu said.

The supervision is so tight that last month some $186,000 of the payment allocated for Hamas officials was left over after some did not pick up their money. The Qataris proudly reported this to Israel as proof that the oversight was effective and that the money was not falling into the wrong hands.

The question now is what happens in four months, once the six-month Qatari grant runs out in April. For now, no one in Israel or Gaza knows.

Judging by the experience of the past two months, the system seems to be working — other than the botched Israeli commando operation in Gaza in which an Israeli officer and six Gazans were killed Nov. 11, setting off a brief, violent skirmish with Hamas that culminated in a controversial cease-fire. If calm is maintained in Gaza over the next four months, the sides can then proceed to the next stage in a long-term cease-fire deal that has been months in the making — the return of the bodies of Israeli soldiers and of Israeli civilians held by Hamas, as Netanyahu hinted. This, in turn, would be followed by the establishment of a naval passage to Gaza through Cyprus that would allow supervision of goods entering the Strip.

There remains, however, the significant question of who will replace the Qataris and donate money for the salaries of the Hamas employees. After all, even if a cease-fire deal is reached with Israel and the Gaza economy shows signs of life, a miracle is not in the cards. It will take more than a decade to rehabilitate the coastal enclave.

The issue of the deal with Israel and the heavy-handed conditions it imposes on money transfers to Gaza is creating a rift within the Hamas leadership. Hamas is a somewhat secretive organization, generally presenting an outward image of unity, but this image to the exterior is false. Various sources are reporting that the rift between Hamas Gaza leader Yahya Sinwar and the head of the organization’s political bureau, Ismail Haniyeh, is very deep.

A source in the rival Palestinian Fatah organization who lives in Gaza tells Al-Monitor on condition of anonymity that “everyone knows” about this falling out and that the two men are not speaking. Haniyeh believes Hamas should not have given in to Israel’s demands to stop the weekly protests along the Gaza border until Israel agrees to lift its siege of the Strip, the source said. Sinwar, on the other hand, wants to give the deal a chance, and since he enjoys the backing of the armed wing, his influence in Gaza is greater than Haniyeh’s.

On Nov. 22, journalist Daniel Siryoti reported on the leadership rift in Israel Hayom. The clash is so severe, he reported, that the organization had split into two camps — one supporting Sinwar, the other Haniyeh — and senior officials had resigned as a result. According to the same report, the former head of the political bureau, Khaled Mashaal, has been asked to serve as a go-between, but his efforts thus far have failed.

A political source within Hamas, who spoke with Al-Monitor on condition of anonymity, confirmed the crisis and tension at the top, but added that the reports in both Israel and the Palestinian Authority are highly exaggerated. “The entire Hamas leadership,” he said, “both the political and military wings have one goal — to bring about an end to the siege.”

Even if the source is right, it is unclear what Sinwar and Haniyeh will do in four months once the Qatari money “dries up.” Hamas cannot administer civilian life in Gaza while holding both ends of the stick: on the one, continuing to strengthen its armed wing and to threaten Israel, and on the other demanding a lifting of the siege and opening of passages into Israel.

The situation in Gaza under Hamas control for over a decade has deteriorated to the point of a total system collapse. Even if a miracle occurs and all the crossings into Israel and Egypt are opened, it will take a generation for its residents to recover and its economy to become independent. Meanwhile, the 2 million residents are having to make do with the Qatari donation and wondering, rightly so, what will happen in 120 days. No one has an answer for them now.