Is Bibi’s restraint on Gaza a sea change, or last act before war? 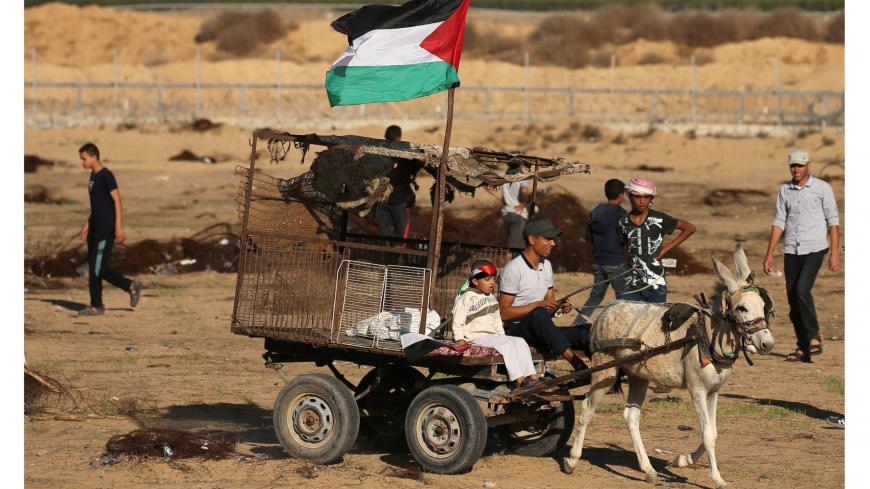 “The leadership of Hamas and the Islamic Jihad announced Nov. 1 that they accept the understandings reached with Israel through Egyptian mediation: transitioning to nonviolent demonstrations along the fence while the siege of Gaza is eased,” reports Shlomi Eldar. “The joint announcement was made at the end of a meeting between the heads of the organizations (including Hamas' military arm) at Hamas political bureau chief Ismael Haniyeh's office in Gaza. The groups decided to give the plan a trial period of six months.”

Both Hamas and the Islamic Jihad have shown unusual restraint in recent weeks in order to prevent escalation of the conflict with Israel, distancing themselves from rocket attacks on Beersheba in southern Israel on Oct. 17. Rasha Abou Jalal reports that Hamas officials told Al-Monitor that those attacks were not planned in the “resistance factions’ joint operation room,” which is “designed to ensure that any retaliatory Palestinian military action against Israel is done jointly among the factions [Hamas and the Islamic Jihad], to identify the opportune time to carry out such an action, and to determine its magnitude based on that of the Israeli attacks.”

Israeli Prime Minister Benjamin Netanyahu’s willingness to deal with Gaza has been a work in progress. Almost 10 years ago, “Netanyahu announced that if he was elected [as prime minister], he would order the Israel Defense Forces (IDF) to invade Gaza, bring down the Hamas regime and destroy the terror nest that it has become,” writes Ben Caspit. “On Oct. 29, Netanyahu admitted for the first time that Israel ‘has no interest in toppling the Hamas regime.’ The prime minister summoned political reporters and regaled them with a very detailed and convincing speech as to why Israel has no current interest in bringing down Hamas and would, therefore, make do with reaching an arrangement to keep Gaza from total collapse. The reasoning, in Netanyahu’s own words, was that the collapse of Gaza ‘would blow up in our faces.’ He then went on to blame Palestinian President Mahmoud Abbas for the collapse of Gaza’s humanitarian infrastructures.”

“The mini arrangement was initiated by Egypt after the chances of a broader arrangement were deemed to be nil,” writes Eldar. “Palestinian President Mahmoud Abbas categorically refuses to enter Gaza and take part in an arrangement despite the enormous efforts expended on it. Another of the obstacles to the arrangement is Hamas' unwillingness to give up its demonstrations at the border, out of concern that if the arrangement doesn’t work they would be hard to restart.”

“An additional obstacle to an arrangement that seems to have been solved is Israel’s refusal to allow the monthly transfer of $15 million in Qatari funding for the salaries of Hamas administration personnel,” adds Eldar. “Egypt promises that the money will be transferred to the civil administration of Hamas and not its military arm, though it’s unclear how it could be overseen, so Israel seems to be leaning toward withdrawing its objection.”

“What is remarkable about this chaotic and unresolvable situation is the way that history has been turned upside down,” writes Caspit. “At about the same time that the prime minister was saying this, the PLO’s Central Committee meeting in Ramallah on Oct. 28 decided to call on Abbas to place recognition of Israel on hold along with any security coordination between the Palestinian forces, the IDF and Shin Bet. This call for measures expressed Abbas’ recent policy of ‘burning the house down.’ They leave him watching with nervous anticipation at Israel’s attempts to rescue Hamas, while he remains isolated in Ramallah.”

What worries Netanyahu, adds Caspit, “is that if Abbas returns to Gaza and takes the reins of power from Hamas, he and the Israeli right will immediately lose their ultimate excuse, i.e., that negotiations have reached a deadlock. Suddenly, there would be a single, unified Palestinian partner in Gaza and the West Bank with whom Israel would be obliged to negotiate. That is the one possibility that Netanyahu will do everything he can to avoid. If he has to reach an ad hoc alliance with Hamas in order to achieve this, then he has no choice but to do so. After all, the only thing more dangerous to Netanyahu than getting tangled up in war is getting tangled up in peace.”

A recent poll among Palestinians, including those in Gaza, revealed an increased openness to negotiations this year. Adnan Abu Amer writes that “in the Gaza Strip, the situation never changes. The Israeli siege grows fiercer by the day and there is no prospect of alleviating or lifting it. Talk of an imminent Israeli war against Gaza is raising concerns among the Palestinians who fear its terrible consequences as they have not yet recovered from the previous three devastating wars.”

“Palestinians in the Fatah-controlled West Bank are not supporting such negotiations with Israel as much as they used to. Meanwhile, Palestinians in the Gaza Strip, where Hamas rules and has built an armed military arsenal, are supporting resistance less, according to the poll,” reports Abu Amer.

“The big if is whether the arrangement [between Hamas and Israel], which is limited at this stage to six months until the situation in the Palestinian Authority (and Abbas’ position) become clearer, will bring about a renewal of the talks between Israel and Hamas with Egyptian mediation regarding the return of the bodies of soldiers Oron Shaul and Hadar Goldin and the two Israeli civilians held in Gaza,” concludes Eldar. “The negotiations are not expected to be easy. … Another weekend of rocket fire on Israel or violent demonstrations at the fence, or the breakdown of the arrangement for any reason, will force him to prove to his political rivals who are ready to pounce that he still stands strong against Hamas. The question now is whether Hamas and the other Palestinian factions celebrating their achievement understand that it is likely Netanyahu’s final act of defensive restraint, after which could come war in Gaza.”