In order to preserve himself politically, Prime Minister Benjamin Netanyahu needs an arrangement with Hamas. 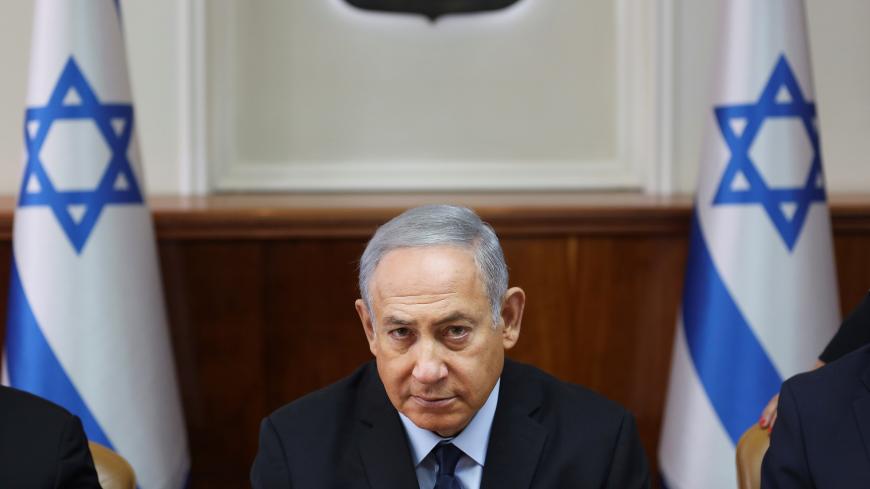 It has been almost 10 years since Prime Minister Benjamin Netanyahu announced that if he was elected, he would order the Israel Defense Forces (IDF) to invade Gaza, bring down the Hamas regime and destroy the terror nest that it has become. On Oct. 29, Netanyahu admitted for the first time that Israel “has no interest in toppling the Hamas regime.” The prime minister summoned political reporters and regaled them with a very detailed and convincing speech as to why Israel has no current interest in bringing down Hamas and would, therefore, make do with reaching an arrangement to keep Gaza from total collapse. The reasoning, in Netanyahu’s own words, was that the collapse of Gaza “would blow up in our faces.” He then went on to blame Palestinian President Mahmoud Abbas for the collapse of Gaza’s humanitarian infrastructures.

Until now, Netanyahu has built up his image as the macho strongman, facing off against Hamas. He even used a similar expression as a slogan in previous election campaigns. He made a sharp distinction between his own policies and those of the previous governments, with particular emphasis on Ehud Olmert’s policies. But Olmert led the IDF through Operation Cast Lead in 2008 and ground maneuvers in Gaza, stopping before Hamas was defeated for all the same reasons that Netanyahu listed this week. Back then, Netanyahu lashed out at Olmert, then-Foreign Minister Tzipi Livni and then-Defense Minister Ehud Barak, declaring that things will look very different under him. Today, it became quite clear that he wasn’t quite telling the truth, or as it is described in Israel, “The things we see from here can’t be seen from there” — meaning that things look different from the prime minister’s seat. For the first time ever, Netanyahu admitted as much.

What is remarkable about this chaotic and unresolvable situation is the way that history has been turned upside down. At about the same time that the prime minister was saying this, the PLO’s Central Committee meeting in Ramallah on Oct. 28 decided to call on Abbas to place recognition of Israel on hold along with any security coordination between the Palestinian forces, the IDF and Shin Bet. This call for measures expressed Abbas’ recent policy of “burning the house down.” They leave him watching with nervous anticipation at Israel’s attempts to rescue Hamas, while he remains isolated in Ramallah. The situation in late 2018, more than 25 years after the signing of the historic Oslo Accords, is as follows. Israel and the Palestinian Authority (PA) are locked in a longstanding conflict. There has been little communication between them for a very long time, and the two are moving apart rapidly. Meanwhile, Israel and Hamas are drawing closer. They are now engaged in indirect negotiations, and the two of them recognize each other — at least indirectly. Israel regards Hamas as the sovereign authority in Gaza and is trying to keep it that way, while Hamas continues to preach Israel’s destruction and, to that end, tries to ignite the region and instill an atmosphere of terror. If the three architects of the Oslo Accords — Yitzhak Rabin, Yasser Arafat and Shimon Peres — were to wake up from their eternal rest, they would have a hard time understanding how the parties got to where they did.

Netanyahu went into extensive detail with the reporters about his expansive efforts to reach a long-term arrangement with Hamas in Gaza. According to him, they almost reached such an arrangement just last week, but then the hordes stormed the border fence again. The ensuing “day of battle” pushed his diplomatic efforts several steps backward. As of now, it remains unclear as to what the parties will reach first: an arrangement or a widespread military conflict. Netanyahu went out of his way to explain to his listeners why another round of fighting in Gaza would serve no one. “What would we do with Gaza if we conquered it?” he asked. “We would still have no one to give it to. If there was someone to whom we could hand it over, then we would have conquered it by now, but no one even wants to consider that. I know that if we do go to war in Gaza, everyone will applaud me for the first two hours. The question is, what happens after that?”

As of now, Netanyahu has the most left-wing views in the Security Cabinet he leads — in the most right-wing government in all of Israel’s history. It is possible that Interior Minister Aryeh Deri is somewhere to the left of him, but no one else. The main opponent to this approach is Defense Minister Avigdor Liberman, who has been stating openly for the past two weeks that “there is no way to reach an agreement with Hamas” and that Israel should, therefore, deliver ‘’the hardest blow we can.” Yet while Liberman is head of the security establishment, at this point he makes up an insignificant minority in the Cabinet. The Likud’s ministers support Netanyahu, as does Finance Minister Moshe Kahlon of the Kulanu Party. Education Minister Naftali Bennett and Justice Minister Ayelet Shaked of HaBayit HaYehudi usually try to position themselves to the right of Netanyahu, but even they do not support the occupation of the Gaza Strip. They would prefer to see a long and intense air strike rather than troops on the ground.

Netanyahu, on the other hand, still favors seeing if it is possible to reach an arrangement. He is placing his hopes on Egypt, Qatar, UN Emissary to the Middle East Nikolay Mladenov and anyone else who is willing to help out — except for Abbas, of course. Ultimately, Netanyahu’s interests are not being driven solely by his natural concern about a military entanglement. Rather, his reasoning is purely political. His explicit policy is to continue maintaining a separation between Gaza and the West Bank, no matter the cost. He ignores the fact that there is a perfect solution for ruling Gaza if and when the IDF occupies it. The problem, as he sees it, is that this perfect solution is the Palestinian leadership in Ramallah, or, in other words, Abbas. It doesn’t matter that Israel has signed detailed agreements with the Palestinian leadership and that Abbas has maintained security and strategic coordination with it for years — and with whom full coordination continues despite this week’s PLO call.

Netanyahu will not allow this to happen. What worried him is that if Abbas returns to Gaza and takes the reins of power from Hamas, he and the Israeli right will immediately lose their ultimate excuse, i.e., that negotiations have reached a deadlock. Suddenly, there would be a single, unified Palestinian partner in Gaza and the West Bank with whom Israel would be obliged to negotiate. That is the one possibility that Netanyahu will do everything he can to avoid. If he has to reach an ad hoc alliance with Hamas in order to achieve this, then he has no choice but to do so. After all, the only thing more dangerous to Netanyahu than getting tangled up in war is getting tangled up in peace.