The tragedy of Ehud Olmert

The chance for a peace agreement with the Palestinians disappeared with the former Israeli prime minister, who has been sentenced to prison for bribery. 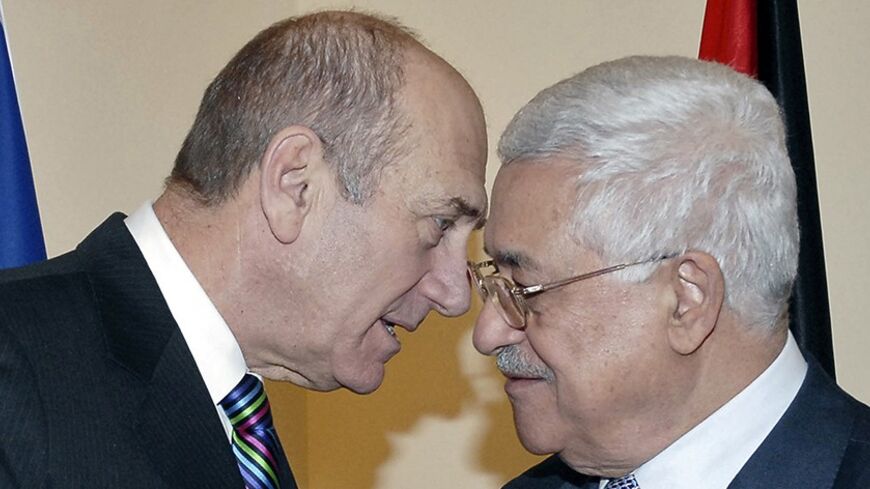 The story of Ehud Olmert, who was convicted March 31 on two charges of bribery by the Tel Aviv District Court, thus becoming the first convicted Israeli prime minister, was a personal, national, political and diplomatic tragedy.

He had not been poised to become the premier. Although a seasoned politician, Olmert was nevertheless a highly unpopular figure in Israel. Had he vied for the premiership on his own, he never would have stood a chance.

It was a political conjuncture, the kind of which can only happen in Israel’s unpredictable politics, which had him replace the late Prime Minister Ariel Sharon, who collapsed after suffering from a massive stroke in January 2006 on the eve of the general elections. Stepping into Sharon’s shoes deep into the election campaign of Kadima, a newly formed party that had been established on the ruins of the Likud Party, he somehow managed to garner 29 seats (out of the 40-plus seats that the polls had predicted for Sharon) and set up his new government.

Olmert’s government launched two regional military campaigns: the Second Lebanon War in July 2006 and Operation Cast Lead in Gaza at the end of 2008. Controversial from an operational standpoint, these two miniwars changed the rules of the game, consequently reshaping Israel’s deterrence on its southern border but more so on its northern one. Speaking of the northern border, Hezbollah Secretary-General Hassan Nasrallah would later admit that had he been able to anticipate the intense Israeli reaction to the kidnapping of two Israeli soldiers — Ehud Goldwasser and Eldad Regev — he would have avoided the entire adventure altogether. In tandem, Olmert conducted advanced peace negotiations on two fronts: vis-à-vis Syrian President Bashar al-Assad, who back in the day was still deemed the omnipotent ruler in his country, and vis-à-vis Palestinian Authority President Mahmoud Abbas.

Olmert was born and raised by the young Israel’s right-wing aristocracy. Hailing from the pre-state Etzel underground movement that fought the British in Mandatory Palestine, they were members of the “fighting family” that espoused a hard-line right-wing ideology. Over the years, he underwent the same process as did many other right-wing Likud “princes” – namely, he came to his senses.

The same thing happened to Ariel Sharon, former Likud ministers Roni Milo, Meir Sheetrit, incumbent Justice Minister Tzipi Livni and a host of other figures. He did not come to his senses in the same style as did Prime Minister Benjamin Netanyahu, who called for a “two-state solution” but did everything to sabotage the idea. Nor was it in the style of Ariel Sharon, who evicted 25 Israeli settlements (including in northern Samaria) in the framework of the “disengagement plan” from Gaza, but was unwilling to negotiate with the Palestinians since he did not believe a single word that came out of their mouths.

When Olmert came to his senses, he went the whole nine yards. Dispatching his then-Foreign Minister Tzipi Livni for futile negotiations with Palestinian negotiator Ahmed Qurei, he himself sat down with Mahmoud Abbas for a long series of historic talks. At the end these talks he submitted to Abbas a far-reaching peace proposal, the kind of which no Israeli leader had ever entertained before, and — if I may place a wager — one which will never be entertained by any other Israeli leader in our time.

Olmert proposed establishing a Palestinian state on almost the entire area that Israel had occupied during the 1967 Six-Day War (with land swaps that would make it possible to keep the settlement blocs intact). He also proposed dividing Jerusalem and even allowing a limited return of Palestinian refugees to Israel (5,000 people annually for five years.) Olmert even provided Abbas with a map. To date, when Israel’s right wing wants to defy the Palestinians, it asks why Abbas never took Olmert up on his offer. And that’s a very valid question. Even the fact that the proposal was submitted toward the end of Olmert’s term cannot justify the Palestinians’ invariable ineptitude.

Had Mahmoud Abbas said “yes” to Olmert’s proposal, it would have had a huge international impact. The proposal of the Israeli premier would have become the platform on which the negotiations could be later resumed. But since Abbas disappeared and never replied to Olmert’s proposal, the opponents of an agreement in Israel are armed with heavy artillery. Here’s the proof that there is no Palestinian leader who can wholeheartedly accept a proposal that “puts an end” to the conflict and makes “no further demands” from either side. The Palestinians are simply unable, unwilling and unready. This is the working premise among Israel’s right-wing, centrist and in some moderate left-wing circles. Unfortunately, there is no evidence to disprove it.

Olmert was ousted from power following a series of police investigations. He lost his immune system in the wake of the Second Lebanon War, which was perceived by the Israeli public as a resounding failure because the mighty, well-equipped and trained Israel Defense Forces (IDF) could not overcome a few hundred Hezbollah fighters. It was only years later that it started dawning on Israelis that the war had been much more successful than they had originally thought it to be. It is impossible to vanquish a guerrilla organization whose fighters never show up for battle but simply make do with hiding below ground and firing hundreds of rockets at a civilian population. On the other hand, the deterrence that was established in the north serves Israel to this present day. And Hezbollah's Nasrallah — despite still sticking out his tongue — is afraid to be seen in public. It was actually just this week that he said that he was not interested in war with Israel.

In the wake of the Second Lebanon War, Olmert was no longer the arrogant and overconfident prime minister that he used to be. The investigations went ahead. Files were opened and closed until he was forced to resign toward the end of 2008. In January 2009, Israel held general elections and Benjamin Netanyahu was re-elected prime minister, a position he still holds.

And along with Olmert, the chance for peace also vanished, never to return again.

Netanyahu does not have a sincere desire to end the conflict. He does not believe that the Palestinians want to end the conflict. Chronically suspicious, he is a professional pessimist. And given that he does not trust any of his ministers, he cannot be expected to foster trust with a Palestinian leader. Netanyahu’s demand that the Palestinians recognize Israel as the nation-state of the Jewish people is justified and yet at the same time it’s a stumbling block. Yes, Israel has every right to be recognized as such, yet there is no reason to make it a sine qua non for the entire process, or a kind of a litmus test for the Palestinians’ true intentions. The working premise should be that the Palestinians don’t like us and that they would have been very happy if we could have all vanished one day, like a nightmare that’s faded away. The sentiment, incidentally, is mutual. So instead of each side climbing on a high horse and putting conditions on each other, what they should have done was to make a genuine effort to resolve the real issues. Ehud Olmert made such an effort (it’s a shame that Abbas did not join him) until his departure.

This is also the big mistake that’s made by the energetic US Secretary of State John Kerry. While this article was being written, Kerry was about to conclude another quick visit to the region, which included meetings with Netanyahu and Abbas. I have no idea what went through Kerry’s mind when he invested everything he had in an effort to reach a permanent status arrangement. There isn’t a single person across the Middle East who believes that this conflict can be resolved while Israel is ruled by a government led by Netanyahu, together with Habayit HaYehudi party and with Foreign Minister Avigdor Liberman as part of it. Nor will this happen as long as there is no illustrious Palestinian leader who can look his people straight in the eyes and make it clear to those who have still not figured out that Israel is here to stay and that there is no way it can be inundated with Palestinian refugees.

Given this state of affairs, it would have been better to seek an outside-the-box solution in a regional setting or, alternatively, to try breaking down the situation into confidence-building arrangements. There were quite a few such proposals on the table. Even Netanyahu admitted in closed forums that he would have preferred to reach an interim arrangement, yet that could only happen if “Washington initiated it.” Ultimately, what Washington did was to dispatch a black knight on a white horse in the form of John Kerry. The latter realized, tragically late, that he was fighting windmills or engaging in a wild-goose chase. Kerry has come to understand that, albeit the hard way.

In a last-ditch effort, he is trying to extend the negotiations by six more months, maybe by releasing Jonathan Pollard in exchange for a massive release of Palestinian prisoners or by reviving the option for a construction moratorium in the territories. That’s too little, too late. Given the current situation, the chances of reaching any sort of an arrangement with the Palestinians are as good as Ehud Olmert’s chances of being re-elected prime minister in Israel. Right now, Olmert is closer to going to jail than he is to sitting in the prime minister’s office.