Is Abbas one vote from Security Council majority?

Faced with a diplomatic stalemate unprecedented since the Oslo Accord, the Palestinians have given up on negotiating with Israel, opting instead to go to the UN Security Council, where they appear on the verge of securing a majority. 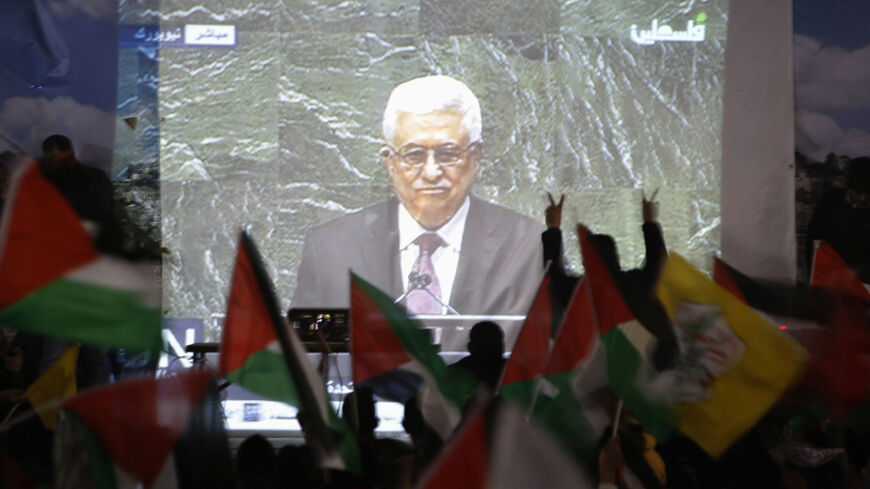 Palestinians take part in a rally while a speech of Palestinian President Mahmoud Abbas at the United Nations is projected in the West Bank city of Ramallah, Nov. 29, 2012. - REUTERS/Mohamad Torokman

In the 21 years that have passed since the beginning of the Oslo process, never has there been a situation similar to the current one between the Israelis and Palestinians: That is to say, total deadlock. There is no political or diplomatic horizon. No negotiations are underway or attempts to facilitate them. The two parties are barely in contact.

To date, there has been only one clear exception, to wit, the second intifada, which began in 2000. In response, the Israeli government eventually launched Operation Defensive Shield in 2002. At that time, it was war. Today, there is no war (as of yet), but there is nothing else either. As noted, never has there been such a situation since Oslo. Until today, there was always something in the pipeline: efforts, contacts, new ideas. Between 1993 and 1996, the Oslo process thrived and boomed before Labor's Shimon Peres lost in elections to Likud's Benjamin Netanyahu in the wake of the assassination of Prime Minister Yitzhak Rabin in 1995.

Even Netanyahu had to accept the Oslo Accord, renewing negotiations in accordance with it. Within this framework, he pulled out of Hebron and agreed to the 1998 Wye River Memorandum. Then came Prime Minister Ehud Barak, who sped up talks and then crashed them at Camp David in 2000. Several new attempts, such as the Taba talks, ensued. Then Barak was unseated by Ariel Sharon.

After Operation Defensive Shield, Sharon embarked on his Gaza disengagement plan. There were no real negotiations, yet it heralded a dramatic and unprecedented diplomatic development, in the framework of which Israel demonstrated that if it wants, and if it has bold and decisive leadership, it is capable of withdrawing from territories and dismantling settlements.

Sharon's disengagement process emerged as a total failure. Instead of leveraging the event to push the peace process forward, rebuild Gaza and turn disengagement into a successful pilot program, a harbinger of peace, the residents of Gaza used the disengagement to turn Gaza into "Hamastan." Yet, when Sharon was replaced as prime minister by Ehud Olmert, negotiations soared to new heights. This was in part due to the work of Foreign Minister Tzipi Livni with Palestinian Prime Minister Ahmed Qurei (aka Abu Alaa), the Annapolis process and the unprecedented peace offer, including maps, that Olmert put before Palestinian Authority President Mahmoud Abbas.

Then Netanyahu returned to power. The first two years of his term were devoted to efforts to renew negotiations, which were being championed, albeit without significant success, by Secretary of State Hillary Rodham Clinton. There was also an unprecedented construction moratorium in the territories. Eventually negotiations resumed, but they were too little, too late. There then followed nine months of euphoria, with Secretary of State John Kerry and special envoy Martin Indyk at work, until the two parties reached a dead end.

In the interim, Netanyahu's one term ended and he began another. The two sides hunkered down but dug in their heels. The Americans came up with a few ideas, but it was over. This year's Operation Protective Edge was the coup de grace.

At the moment, Abbas has slammed the door shut on the peace process. Meanwhile, Netanyahu has not declared a day of national mourning. He has had his fill as well. "The Palestinians have realized," a high-ranking Palestinian official told me at the start of October, "that they have nothing more to look for in their negotiations with the Jews. It's a waste of time. We would be better off approaching the international community directly and try to break the impasse there."

And Netanyahu? On the one hand, he feels somewhat relieved. Negotiations do not agree with him. He loses ground with the right wing, taking heavy flak from his own Likud Party while enhancing the standing of Minister of Economy and Trade Naftali Bennett and Foreign Minister Avigdor Liberman. As far as Netanyahu is concerned, the negotiations can disappear forever. On the flip side, however, this is a perilous notion, and Netanyahu should break into a sweat at reviewing such a scenario.

What the Palestinians are planning to do in lieu of negotiations is to approach the UN Security Council with a detailed resolution to establish an independent Palestinian state side by side with Israel. Abbas, who is almost 80 years old, would not have reached such a ripe age or attained his position had he not been a foxy, wise and calculating person.

His resolution proposal will incorporate all the things the Americans have already agreed to during the long years of negotiations. The United States will find it hard to object to such a proposal, because it does not contain anything substantive that it has not already supported. Abbas' working assumption, however, is that in the end, the United States will veto the resolution.

It is against this backdrop that a fierce diplomatic battle is taking place, with the Palestinians trying to ensure that at least 10 states will support the resolution. According to diplomatic sources, at the moment they have nine votes. France is vacillating. If France were ultimately to join the nine others, thus securing the support of two-thirds of Security Council members, the Palestinians could proceed — the US veto notwithstanding — to the UN plenary. There, the resolution would be adopted if backed by a two-thirds majority, which is something the Palestinians should have no problem securing. The big bank of Islamic and nonaligned states will vote for them automatically. The United Nations will recognize an independent Palestinian state.

This will be a nightmare scenario for Israel, which will find itself in conflict with a recognized state. On Oct. 3, Sweden's newly elected prime minister, Stefan Löfven, announced that his country would recognize an independent Palestine. A diplomatic outcry ensued in Israel, and the Swedish ambassador was summoned for a démarche at the Foreign Ministry in Jerusalem. Sweden published a few obfuscating clarifications, but when the dust finally settled, it became apparent that it remained steadfast in its position. Yes, it will recognize Palestine.

In Abbas' scenario of his move, the whole world will recognize the new state. Imagine what will happen in Jerusalem, especially in light of the new status Abbas will have on behalf of his country to drag Israel into every conceivable tribunal, chief among them the International Criminal Court of Justice in The Hague.

Is this all really about to happen? There are indications that it is, although in the Middle East anything is possible at any given point in time. Several diplomatic approaches are being explored in Israel. The one by the right wing, championed by Bennett and supported by most of Likud, contends that there is no need for negotiations. The Palestinians are the ones who did not sign Kerry's proposal, which is why they should call Israel, which must not give up or back down: There is no room at this time to establish a Palestinian state when the entire Middle East is on fire, crashing in on us. Period.

Standing next to them is Netanyahu himself. Ostensibly, he's more pragmatic. He wants to resume negotiations immediately without preconditions. He has the support of Knesset member Zachi Hanegbi and Intelligence Minister Yuval Steinitz as well as a handful of others. This approach is also supported by Finance Minister Yair Lapid and Justice Minister Tzipi Livni, although the two of them want real negotiations, whereas Netanyahu plans to continue his exercise in futility and kill time. Standing with Netanyahu like a rock is Defense Minister Moshe Ya'alon. He, too, doesn't believe that there is a Palestinian partner at this time, but he is well aware of the paramount importance of holding negotiations, however minimal, between the parties.

At the far end of Israel's right wing, as well as that of the left, there are a few voices (whose numbers have been growing as of late) who believe that the idea of the two-state solution should be pronounced dead, and instead, the one-state solution should be embraced. Radical leftists will see it as a multinational state of Jews and Muslims, Israelis and Arabs. Those on the right envision more of an apartheid-like state. While Arabs would enjoy citizenship, they would not, however, be real partners in running the affairs of the state.

And there's something else. There are a few old-time peace militants and activists working on the fringes of Israel's political-diplomatic establishment to draft an outline for an Israeli-Palestinian arrangement that starts with the issues of borders and security. With regard to these two issues, which Kerry's negotiations should have focused on during their brief nine-month lifetime, understandings can be quickly reached. This is what the people involved believe. If this stage is clearly outlined in a paper, the Israeli government could be toppled on that basis. Livni and Lapid will unite. Netanyahu's government will fall. The centrist-left circles will then close ranks behind the agreement that has been achieved and will go with it into new elections.

Is this last scenario likely to unfold? It stands a much smaller chance than Abbas' scenario. Yet, contacts among actors who are not part of the current official political establishment are taking place on the back burner. Yet, this does not stop the happy cruise of the Israeli Titanic toward the Palestinian iceberg. In the end, something from the things described here is bound to happen.