Secretary of State John Kerry's frustrations on the Middle East should not come as a surprise. 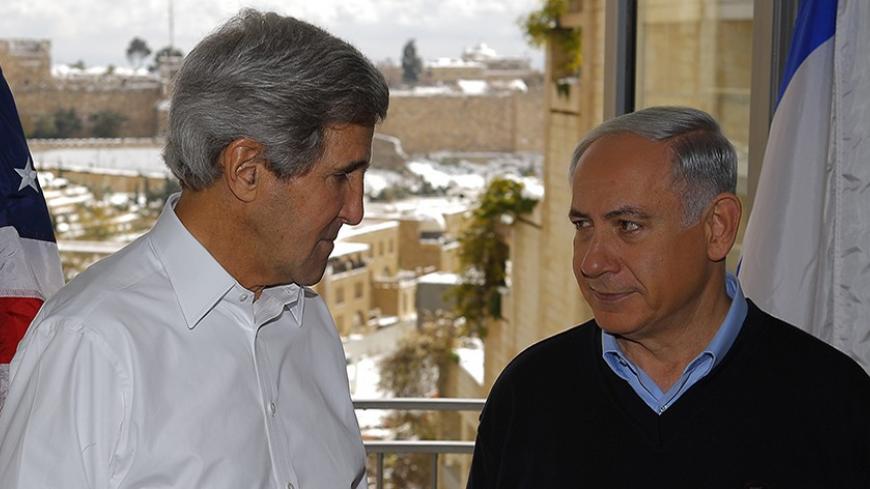 "The danger of peace has been averted," was the message that one of the Likud Party's senior ministers texted on April 1 to some of his associates shortly after it became apparent that Palestinian Authority President Mahmoud Abbas had submitted a request to be inducted into 15 UN bodies with a state status. Publicly, this minister actually backs Prime Minister Benjamin Netanyahu and "supports" the two-state solution. Internally, however, this minister knows full well that anyone caught voting or supporting the compromises and proposals entertained by US Secretary of State John Kerry will pay a stiff price in the upcoming Likud primary.

So any life-seeking right-wing or centrist politician in Israel knows that things are better off this way. Peace or negotiation with the Palestinians is a sure recipe for trouble at home. So who needs this headache? Senior Likud ministers are asking the question, which is just as apt for Kerry. His headache this week was even greater than those of Israel's right-wing ministers. He had not only the Israelis, but also the Palestinians in his aching head.

Everything that has happened to Kerry's initiative this week was smeared in block letters on every wall en route to this impasse that we have just reached. What we had here was a foretold chronicle of a breakdown on one hand, and a sweeping and somewhat childish enthusiasm with which Kerry sank his teeth into the negotiations on the other. Had Kerry studied and examined the history of the last 20 years, he would have discovered that what he had undertaken was a mission impossible. Nobody has ever returned alive from it. Even actor Tom Cruise would not have been able to connect these two intransigent parties. In the end, even with the best of intentions, this was like getting blood from a stone or trying to mix water and oil.

Similarly to all his predecessors, Kerry's problem is that he thinks in logical terms. His logic is an American, cosmopolitan one; it's logic that makes sense. And this kind of logic is a scarce commodity in the Middle East. When he sits down separately with each one of the parties, Kerry emerges enthused and imbued with faith. Going on and on, Netanyahu expatiates about the need for peace, declaring inside the room his willingness to pay the painful price for peace, and so on and so forth. Mahmoud Abbas does exactly the same thing. Yet when it comes to taking action or making concessions, the whole thing implodes.

There might still be a way of extending the negotiations until the beginning of 2015. A last-minute breakthrough could take place, unexpected flexibility might be achieved during injury time, and the Americans might make blunt and explicit threats that would twist the arm of both sides, forcing them into overtime. Ok, then what? Where will this extension take us? To exactly the same place.

Here is what unfolded this week at Netanyahu's office in Jerusalem, being very telling of the Israeli side: On Tuesday and Wednesday of this week, April 1-2, at the most critical juncture of the negotiations, Netanyahu oversaw the situation from the room of his national security advisor Yossi Cohen. Crammed inside were Justice Minister Tzipi Livni, Israel's special envoy attorney Yitzhak Molcho, Defense Minister Moshe Ya'alon, National Security Advisor Cohen, as well as a few other officials and advisors. Netanyahu frenziedly came in and out of the room, with John Kerry occasionally on the other end of the red phone. Loud yelling was heard all over.

At the exact same time, in an adjacent room, in the same office, the right-wing war room in Netanyahu's government was abuzz. Huddled in there were right-wing Knesset members and ministers as well as representatives from HaBayit HaYehudi, the right-wing party whose secession from the coalition could have quickly heralded new elections in Israel. In Yossi Cohen's room, efforts were being made to extend the negotiations while releasing 400 Palestinian prisoners and partially freezing construction in the settlements. In the adjacent room, the right-wing activists were taking action to thwart this plan. This was all happening simultaneously, in the prime minister's office and with his consent. Nothing is impossible in Israeli politics.

On the other side, in Ramallah, where the Palestinians are running their own affairs, the situation was not much more encouraging. Maybe even less so. What we had there is a 79-year-old, weary and tired leader who was elected democratically 10 years ago. Surrounded by opposition members urging him to adopt a more radical stance, he has no mandate to make any concessions. Mahmoud Abbas, aka Abu Mazen, cannot look the Palestinian people straight in the eye and explain to them that the return of refugees to Israel cannot happen.

Unable to sign a paper that will put an end to the conflict, he is also incapable of publicly recognizing Israel as the nation-state of the Jewish people. There is no Palestinian to be found today who can make such concessions and outlive them. The Palestinian people are divided between Gaza, which is controlled by Hamas and more radical organizations that do not recognize Israel at all, and the West Bank, which is ostensibly controlled by the Palestinian Authority, yet is seething, foaming and bubbling between various rejectionist organizations, opposition groups, rejectionist refugee camps and people like former Fatah official Mohammed Dahlan (from the outside) and Fatah senior official Jibril Rajoub (from the inside) who will allow no leader to make concessions en route to the deadlock with Israel. There is complete similarity between right-wing Likud members that force Netanyahu and his ministers to make no concessions vis-à-vis the Palestinians, and the militant Palestinian public that forces its leaders to preserve the dream, regardless of how impossible it may be.

And we have yet to talk about the Palestinian refugees who are dispersed in various refugee camps and Arab states, doing whatever they can to perpetuate their refugee status for dozens of years. When Israel was founded in 1948, it was immediately inundated by massive waves of hundreds of thousands of refugees ejected simultaneously from the neighboring Arab countries: Iraq, Yemen, Egypt, Syria, Morocco, Tunis and others. Leaving behind all their money, property, culture and life, these Jewish refugees were absorbed by the fledgling state. Despite being thrown to the periphery and into remote development towns, they nevertheless did not enshrine their refugee status, making no demands to go back anywhere. Picking up the pieces, they became equal citizens proud of their independent country.

On the other side — with the Palestinians — the process was diametrically opposed. With the amount of money the Arab world has poured into wars and other nonsense in the last 60 years, every refugee camp in the Middle East could have been turned into a blooming garden. But no one had any real intention to do that. The name of the game is perpetuating distress, victimhood and radicalism. The dream of the right of return is alive and kicking, yet as long as they do not give it up, they will not find a real partner on the other side.

The Israeli public is divided on the issue of establishing a Palestinian state, conceding the territories or dividing Jerusalem. However, it is wholly united, in a rather rare consensus, around its unwavering refusal to allow the refugees to return to Israel. Given this state of affairs, John Kerry — even if he were suddenly to acquire the powers of Superman — has no possible way of getting blood out of a stone. We would have been better off to look squarely at reality and come to terms with the reality that there is no way of reaching a permanent status agreement between Israel and the Palestinians at this time. Politically speaking, Netanyahu would not survive a day, and Mahmoud Abbas might not physically survive more than a fortnight. Thus a different, out-of-the-box solution should have been sought. Something creative should have been tried. A series of interim arrangements with a "diplomatic horizon" and international guarantees to the Palestinians should have been reformulated. Having decided to go all in, Kerry is facing the fragments.

And two final remarks in conclusion: The last time the negotiations ended this way — at Camp David in 2000 with then US President Bill Clinton, Israeli Prime Minister Ehud Barak and Palestinian Authority Chairman Yasser Arafat — the second intifada broke out, resulting in some 1,100 civilian Israeli fatalities and about 4,000 Palestinians. Every avenue should be exhausted to keep this from recurring.

And yes, there's also that thing with Jonathan Pollard. I ask myself when the American administration will realize that when it comes to the Israeli spy who has been locked up for nearly 30 years under harsh conditions, all lines have been crossed. All dams have been breached and all red lines of humanity, morality, human rights and common sense have been crossed. I ask myself how is it that there is no one — be it in the White House, the State Department or anywhere — to raise their voice and explain to the parties concerned the degree of hypocrisy of a superpower that demands of its ally to release dozens, hundreds and thousands of brutal murderers — terrorists with gallons of innocent civilian blood on their hands — only to extend an artificial negotiation, yet at the same time it continues to torment one person who committed a crime 30 years ago and was meted out a punishment a few-fold more serious than those who perpetrated much worse crimes. It seems to me that I will have to wait quite a long time until I get an answer.