The United States and Europe are playing good cop-bad cop in the negotiations with Israel. 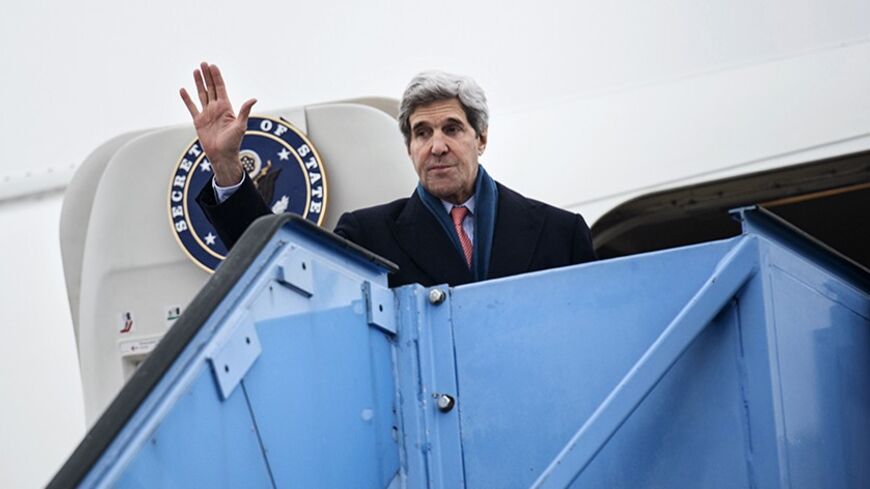 US Secretary of State John Kerry’s team is looking here in Israel for a university to host the secretary’s possible address to the nation. The idea that the secretary would address the Israeli public directly to convince it of the necessity of resolving the Israeli-Palestinian conflict has been in the making for the past few months and was first unveiled Jan. 30.

While a final decision has yet to be made, its necessity is nevertheless unquestionable. Polls in Israel indicate that Israelis have lost trust in the United States as the one that would safeguard the interests of the Jewish state in times of trouble. Some 70% of Israelis believe that the United States is not an honest broker. Incidentally, if similar polls had been conducted among the Palestinians, I would venture to say that an even larger Palestinian majority would have also said that Kerry was not an honest broker. If Israelis and Palestinians alike are convinced that the United States is leaning toward the other side, it's a sure sign that Kerry is in a good position. He apparently is doing something right. But would that cut the mustard? History and statistics suggest that it will not. In the Middle East, you will always come up short when trying to achieve something positive. But Kerry nevertheless remains adamant.

As this article was being written on Feb. 7 before noontime, Israeli Foreign Minister Avigdor Liberman was addressing the Commercial and Industrial Business Club in Tel Aviv. Much has been written about the Liberman of 2014 as being the responsible adult in the entire region and the main significant force in Netanyahu’s coalition that supports saying “yes” to Kerry. In his address, the foreign minister cemented his standing even further. His text might have well been signed by President Shimon Peres. This is what Evet (Liberman) had to say: “John Kerry is Israel’s true friend. I don’t think it is very wise to take friends and turn them into the enemy. When it comes to the American initiative, we have a rhetorical competition among us as to who is more blustery and blunt. … I see Minister of Economy and Trade Naftali Bennett darting toward the microphones, but I don’t see him dashing just as quickly toward the opposition. Kerry is leading the process correctly. … I am certainly in favor of an arrangement with the Palestinians but I am opposed to being a sucker. … Willingness such as we see in the moderate Arab world is something I do not recall. We have opportunities we never had before, and we must take advantage of them. The integrity of the people is more important than the integrity of the land.”

This is a seminal text. The new Liberman is moderate, astute, peace-seeking and a negotiations-monger. He has come to the realization that it is better to succeed Prime Minister Benjamin Netanyahu than to be Bennett’s understudy.

There was only one thing that put a damper on Friday’s party. While Liberman was making his speech, his second-in-command, Agriculture Minister Yair Shamir, the son of late Prime Minister Yitzhak Shamir, was saying the exact opposite to Israeli weekly SofHaShavua: Kerry is not an honest broker. He has crossed the line. You cannot be an honest broker and pin the blame squarely on one side. Kerry is trying to intimidate us and applies undue pressure.

But it is not only minister Shamir. Last week, the American secretary of state came under a combined attack from senior Israeli politicians. On Feb. 2, Minister of Strategic Affairs Yuval Steinitz, Home Front Minister Gilad Erdan and Minister of Culture and Sport Limor Livnat unleashed harsh statements against him. Steinitz, who's said to be very close to Prime Minister Benjamin Netanyahu, topped them all, calling Kerry’s statements at a security conference in Munich “offensive and intolerable.” That same day, Netanyahu also lashed out at the threats to boycott Israel, but did not refer to Kerry by name. At the end of this round, Netanyahu set a new record of hypocrisy, turning to his ministers and instructing them to stop attacking the US secretary of state.

You don’t have to be a political fox to notice Bibi's double game. When three of his closest ministers launch an offensive against Kerry on the same day and at almost the same time — and he, too, adds fuel to the fire later that day, albeit without mentioning the name explicitly, and then “instructs” the ministers not to lash out at Kerry — the message is clear. It’s not me, Netanyahu says, it’s them. I do not have a majority in the Likud Party for such moves, he signals to Kerry. The public is leery of taking such risks. You are pushing me to the edge. You’re pushing me over the cliff.

Unlike the Likud ministers and Netanyahu, the Liberman-Shamir case is not a double game or a coordinated move. This is an extreme lack of coordination. Shamir hails from a radical right-wing ideological family. Liberman, on the other hand, is a pragmatist. His party – Yisrael Beitenu — belongs to him and he holds the title to it. He is the one who draws up the party’s slate on the eve of elections. He is the one who gives thumbs up or thumbs down. Take, for example, the case of former Deputy Foreign Minister Danny Ayalon, whose head Liberman lopped off on the eve of the recent elections, making him history. It would be interesting to eavesdrop on the phone call between Liberman and Shamir today, tomorrow or sometime next week. For one thing, pleasant it won’t be.

For Netanyahu, this isn't just a double game. In the past few months, the Israeli premier has truly been leading a double life. He’s like those husbands who have two families that don’t know the other one exists. Each one of the women is convinced that she is the only legal wife.

When the public spat between the hawkish ministers and John Kerry raged in the media, the parties’ negotiation teams continued to work in full swing. Despite that Kerry has not been to the region for at least two weeks, the work continues at full throttle nonetheless. Working for Netanyahu are the ambassador to Washington Ron Dermer, National Security Adviser Yossi Cohen, the premier’s personal envoy attorney Yitzhak Molcho, his aide-de-camp Gen. Eyal Zamir and his close media adviser Liran Dan. They are mulling over the wording of the terms of reference and making headway. Tal Becker, from the Ministry of Foreign Affairs and the representative of Justice Minister Tzipi Livni, is working on the final wording of the document vis-a-vis Jonathan Schwartz from the State Department. It is believed that from the standpoint of the Israeli-US axis, the work is reaching the final stretch.

The security plan is also making progress. Contrary to all the earlier reports, there is no final US security plan. What we do have is a proposal submitted by Kerry’s team headed by retired Gen. John Allen. At this time, teams from both sides are working on the final outline. Israel’s chief of staff, Lt. Gen. Benny Gantz, who knows Allen from when he served as the Israel Defense Forces (IDF) attache to Washington, personally supervises the work that is being carried out by a special team from the military’s Planning Directorate.

The Israeli defense establishment believes that reaching a joint security plan is a national interest of the highest order. Yet in the same breath, the Israeli generals toe the line with their defense minister, Moshe "Bogie" Ya’alon, who considers sensors, satellites, zeppelins, unmanned airborne vehicles, antennas and fences to be only a backup measure. Nothing, Ya’alon maintains, can replace the troops on the ground. The IDF is trying to come up with a possible “quick intervention” plan by Israeli troops if an immediate need arises, including inside the Palestinian areas. Such examples would include a snowballing terrorist attack, the transfer of strategic weapons, infiltration of wanted terrorists, etc.

When it comes to the Palestinians, the Americans are facing much greater difficulties. Unlike Netanyahu, who agreed to swallow the “1967 lines” as a basis for the negotiations (with a land swap naturally), Palestinian President Mahmoud Abbas (Abu Mazen) has a very hard time digesting the possibility that the US document will consist of recognizing Israel as the nation-state of the Jewish people, thus rendering the “right of return” totally sterile. Netanyahu has made it clear that without these two elements, the document would not fly in Israel under any constellation, even if in the end it is called a US document and nothing more. While Kerry understands this, he finds it hard to deliver. In contrast to Israel, Kerry does not have powerful levers to use against the Palestinians. They cannot be intimidated with a boycott. Their standard of living is not high. They don’t have much to lose. Even if the status of the Palestinian Authority in Washington is downgraded, Abbas has many options and alternatives, also in terms of the economy. He will appeal to the United Nations and have the authority recognized as a state. He will garner economic support from the Arab countries while taking steps toward a rapprochement with Moscow and Beijing. Sometimes, when you have nothing to lose, you are better off.

The European move to start forging a boycott against Israel isn’t purely a European one. This is a well-orchestrated and minutely planned Euro-American move. During President Barack Obama’s first term, whenever the Europeans entertained the possibility of starting a boycott on products made in the settlements, for example, the Americans were the ones to strike it off the agenda. We’re handling the diplomatic issue, so stay out of this, they told the Europeans. And that’s the way it was. Obama’s second term is entirely different, however. It was Kerry alone who hashed out the plan vis-a-vis the Europeans. When this term began, it was reported here that the Americans and Europeans would share roles: The United States would be the good cop and Europe the bad one. Obama will let the Europeans do the donkey work for him. And that’s precisely what’s unfolding right now.

While Kerry was in Munich addressing the dangers of boycotting Israel, Scandinavian banks and pension funds announced that they would stop making investments in Israel. This is the harbinger of the impending winter. Unlike the past, the United States is in no hurry to tell Israel: “No worries, we won’t let them do it to you.” On the contrary; the United States is pumping up the angst in Israel by adding its own hints. We won’t be there for you all the time, the Americans tell Israelis. When the boycott ship sails, it will be hard to stop. Think South Africa, for example. You have been duly warned.

The coming weeks are decisive. This may all come to naught. Kerry may come out with a statement announcing his failure. The unborn document will be shelved and pushed into some godforsaken drawer in the archives. The Americans will retreat with their tail between their legs. They will pull away from their last-ditch heroic attempt to break the stalemate in the Middle East.

However, we are not there yet. Working tirelessly, Kerry gets Obama’s full backing. The Europeans are doing their part, and the whole dish is simmering. There are two people sitting in this giant pot — the 64-year-old Netanyahu and the 78-year-old Mahmoud Abbas. And they’re both sweating: from the heat, as the temperature keeps rising, and from fear.