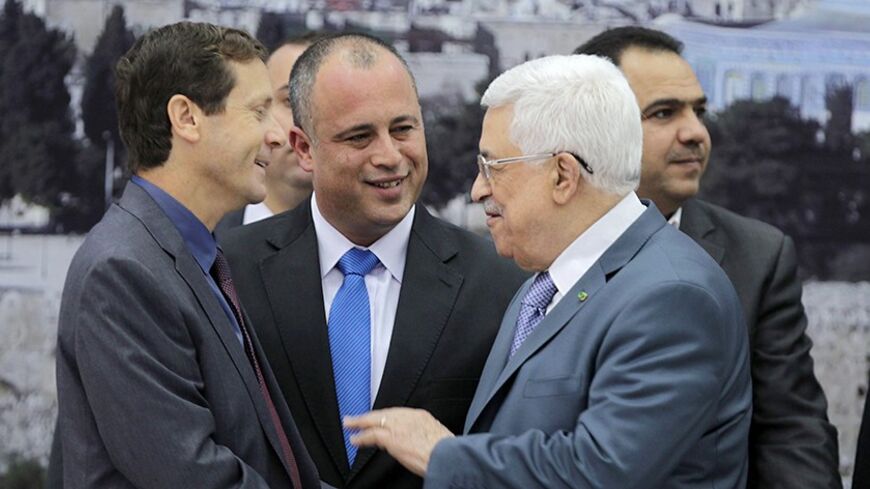 At 1:30 a.m. on Jan. 5, the US Ambassador to Israel Dan Shapiro woke the chairman of the Labor Party, Knesset member Isaac Herzog. Shapiro asked Herzog over the phone if he would be willing to meet with US Secretary of State John Kerry the next day. A few hours later, the chairman of the opposition was having breakfast with Kerry, who had just returned to Israel after a visit to Saudi Arabia and Jordan. He was full of energy and determined to achieve the impossible and reach a diplomatic agreement. Herzog was impressed by Kerry’s genuine concern about what might happen in the region if the negotiations between Israel and the Palestinians do not advance on a more concrete track.

A few hours earlier, Herzog attacked Prime Minister Benjamin Netanyahu from the dais of the Labor Party conference and wondered if Netanyahu has a strong enough spine to lead the country toward a historic agreement with the Palestinians.

Herzog came away from his meeting with Kerry impressed that the secretary of state had a deep understanding of the political reins tugging at Netanyahu and Palestinian Authority Chairman Mahmoud Abbas (Abu Mazen), as they head toward agreements in the negotiations. Kerry wanted Herzog to let him know if he could depend on the opposition to provide him with a safety net if a diplomatic arrangement is reached. Herzog assessed that most of the opposition would give its support in the event that certain coalition parties vote against an agreement or withdraw from the government because of it. “He has the votes of all of us in the Labor Party, and I believe he will have the support of the ultra-Orthodox parties, too.”

It is possible that Kerry wanted to hear this, so that he could counter Netanyahu’s claims about having political difficulties passing any diplomatic process. Regardless, the short warning that Herzog received about the meeting, after Kerry’s busy day skipping between Amman, Riyadh and Israel, adds to the general atmosphere with which the secretary of state is managing the negotiations: It is frenzied, urgent and uncompromising.

In his meetings in Amman with King Abdullah and in Riyadh with King Abdullah bin Abdulaziz, Kerry updated the monarchs on the progress of the talks and the problems facing the negotiations. He also asked them to support Palestinian recognition of Israel as the nation-state of the Jewish people. Various assessments and leaks indicate that Kerry is trying to reach an Agreement of Principles resolving the core issues in a permanent agreement within just a few weeks, and to use this as the basis for the two sides to continue their discussions.

Kerry has already spent many long hours with Netanyahu, with Defense Minister Moshe Yaalon and with Justice Minister Tzipi Livni. He meets with Netanyahu in the prime minister’s residence, with Yaalon usually joining them there. Kerry’s intensity and dedication have injected a shot of adrenaline into the Israeli political system, too, after years of avoiding any dealing with the Palestinian issue, which was at a standstill anyway.

The general feeling is that Kerry will announce his decision very soon. It is possible that he will present an Agreement of Principles signed by both sides — something which, in itself, would be an enormous achievement — and it is also possible that it will be a US document that will serve as the basis of continued negotiations for another year. In both scenarios, the talks are far from over. It will be a paper that will enable the two sides to begin a more meaningful round of discussions. It is significantly less than what was achieved by former Prime Minister Ehud Olmert and Abu Mazen in 2008.

The big question is whether there is even the infrastructure to reach a historic agreement, given the level of distrust that now exists between Netanyahu and Abu Mazen. And all of this comes before Netanyahu even tried to confront the extreme right-wing flank of the Likud Party, and before he came to terms with the idea of evacuating settlements. Evidence of this confusion can be seen in what Netanyahu said at a meeting of the Likud-Beitenu faction on Jan. 6. On the one hand, he declared that no settlements with connections to the Jewish religion — such as Hebron and Beit El — would be evacuated, and on the other hand he addressed his fear of a binational state.

Senior figures in the Likud Party who are close to the negotiations are sure that Netanyahu and Yaalon are only trying to give Kerry the impression that they are taking the talks with the Palestinians seriously. Their intention, claim those same sources, is to survive international pressure to make progress in the negotiations while avoiding accusations that they are refusing to compromise.

When Netanyahu presents Palestinian recognition of a Jewish state as a threshold for the negotiations, he knows that the chances of that happening are slim, but it allows him to present Abu Mazen as the one refusing to compromise. Though Kerry is impressed by how serious the Israeli side is, there is still a long and winding road before the real thing can be reached, and it is not certain that it is even possible to get there at all. When both sides are sticking to their positions and referring to each other in a disparaging and disrespectful way, it is difficult to see how the glass ceiling of this conflict will be shattered, particularly now.

On the other hand, in an interview with Al-Monitor just this week, Minister of Finance Yair Lapid said that the negotiations are serious. He even claimed that this is the most important moment in Israeli history since the Yom Kippur War. Lapid is a member of the Diplomatic-Security Cabinet, and he has access to enough information and materials to enable him to put together a reliable overview of the situation. Furthermore, Netanyahu told him that his intentions are serious. Nevertheless, none of that guarantees that Netanyahu is really capable of bringing about a breakthrough.

The atmosphere is completely different from what it was before the Oslo Accord. Back then, after the shock of the first intifada, the Israeli public had a genuine and tangible desire to find a solution to the conflict. In contrast, Israelis today are more focused on the African refugee protests and the downfall of businessman Nochi Dankner than they are on Kerry and the Palestinians. The relative quiet on the security front, which has continued since Netanyahu’s second term in office, allows everyone involved to adopt a denial mechanism concerning the conflict.

Meanwhile, Kerry has succeeded in presenting a diplomatic agenda, at least on the Israeli political system. As the deadline for reaching an Agreement of Principles approaches, politicians are feeling increasingly tense. Most importantly, they want to position themselves well before their constituents. This week, Foreign Minister Avigdor Liberman aired out his plan to swap territories, Economy and Trade Minister Naftali Bennett sketched out his red lines, Yaalon lowered expectations, Likud Knesset member Miri Regev submitted another provocative new bill, Lapid gave Netanyahu diplomatic backing and the settlers continued their campaign to delegitimize Kerry. But amid all the confusion, the spins and the tension, it is not yet clear where Netanyahu is heading and what he is hoping to achieve. And yet, he will have to let everyone know soon enough.