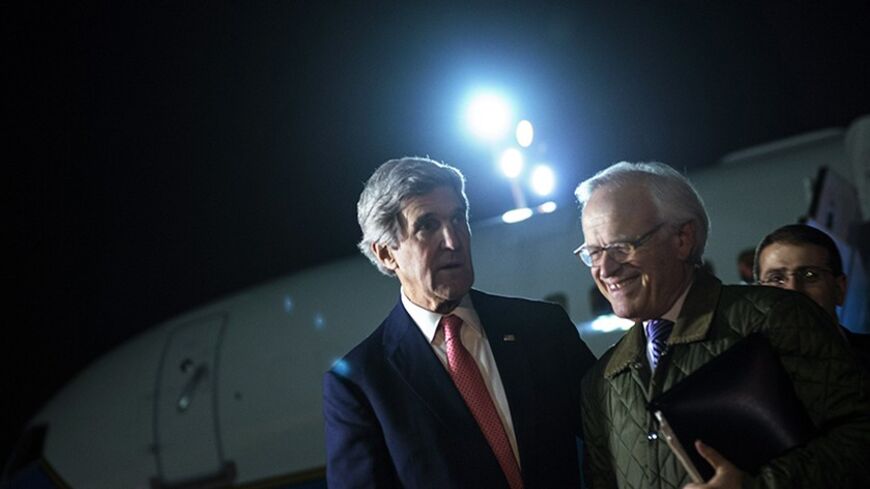 US Secretary of State John Kerry (L) walks with US Special Envoy for Israeli-Palestinian Negotiations Martin Indyk after returning from a day trip to Jordan and Saudi Arabia at Ben Gurion International Airport in Tel Aviv, Jan. 5, 2014. - REUTERS/Brendan Smialowski

US Secretary of State John Kerry is reaching the last stretch of the first round (out of 12 at least) of the hopeless boxing match he is waging against the bitter fate in the Middle East. Kerry's paper will probably be called Terms of Reference, which is not easily translatable into Hebrew. Several alternative and loose translations are possible — such as "principles of reference," "an agreed-upon basis for discussion" or "negotiation guidelines" — and with them just as many variations.

Each of the sides will read into this document what they will, while ignoring what they prefer not to see. The Israelis and the Palestinians will publish their respective reservations but will be asked to approve the extension of the negotiations for an additional defined period of time based on that paper. Said document will have the same status as the road map that was presented by President George W. Bush in 2002. This is the document that defines the basis for the negotiations between the parties; the negotiations themselves will be predicated according to it. It is on the basis of these principles that the parties should conduct the deliberations and haggling over the various issues at hand.

At the Davos summit last weekend on Jan. 24, Kerry met with a delegation of Israeli and Palestinian businessmen from the organization Bridging the Impasse. It consists of a large number of prominent businessmen from Israel and the Palestinian Authority who have rallied in support of the peace process. A group among them has recently called on Prime Minister Benjamin Netanyahu to meet the Palestinians halfway and say "yes" to Kerry's proposal. The meeting with the US secretary of state saw the participation of 26 businessmen, 13 from each side. The prominent figures among the Palestinians were billionaire Munib al-Masri and businessmen Zahi Khouri and Samir Hulileh. Representing the Israeli side were Israel's high-tech visionary Yossi Vardi, banker Shlomo Nehama and businessmen Morris Kahn, Yadin Kaufmann, Shmuel Meitar, Moshe Lichtman and Shlomi Fogel. The latter is worth focusing on. Fogel is one of Netanyahu's closest associates and is said to be part of Bibi's inner circle. His presence and involvement in that group and at such a meeting is quite telling.

Those businessmen saw Kerry at his best. One of the participants told me this week: "He was determined, compelling and very motivated. He told us it was final and that he was putting the document on the table within a 'matter of weeks.' He explained to us that we must convince the Israeli public; that it is the right thing to do for Israel and that we need to tell Israelis failure to make a decision would lead to far worse consequences than making a decision."

Kerry is contemplating addressing the Israeli public himself. Officials at the US Embassy in Israel are looking into the possibility of arranging a kind of "state of the union" address for Kerry, who will face Israelis, look them in the eye and speak from the bottom of his heart. In that address, which would run along the lines of Kerry's appearance before the Saban Forum last December, the US secretary of state will try to convince Israelis to join him. This move is coordinated with the Prime Minister's Office. Kerry is, in fact, coming to assist Bibi in the battle over Israeli public opinion.

Going along with Kerry, Netanyahu swears that he is willing to go the distance to allow the US secretary of state to score an achievement and enable concluding an agreement on the terms of reference document. However, he faces political constraints, which is something the Americans can relate to.

The negotiations between the Israelis and the Americans are making big strides, and agreements have been reached on most points. It has all been reported and published extensively, including here in Al-Monitor. The negotiations will be based on the 1967 lines and land swaps, and Jerusalem will be the capital of both states — the Israeli and the Palestinian. There will be no mention of the right of return. Security arrangements, demilitarization and recognition of Israel as the Jewish state will also be addressed.

The remaining stumbling block is Israel's demand that the Palestinians recognize it as a Jewish state. Kerry is trying to come up with a trade-off: The Palestinians will recognize the Jewish state, and Israel, in turn, will agree that East Jerusalem will be the Palestinian capital. Kerry has been investing enormous energy in exerting pressure on Palestinian President Mahmoud Abbas, who is being perceived as the intransigent side. Kerry is lobbying the Arab League and what is left of the Arab countries (in the absence of Egypt, which is preoccupied with its own issues), to apply heavy pressure on Abbas. It seems to me that the Americans feel, more than ever before, the absence of former Egyptian President Hosni Mubarak, who was always able to deliver the goods at such crossroads.

Kerry's progress is what irritates Israel's raw nerves and what elicited the recent political commotion in Jerusalem between the prime minister and Minister of Economy and Trade Naftali Bennett. This spat was described in my previous article, but since then the two managed to exchange a few additional verbal public blows until Bibi decided to put an end to this affair. He gave Bennett an ultimatum: Either you apologize or you will be dismissed from the government by Sunday. Bennett blinked first and muttered something that could have been construed as an apology. The prime minister declared an all-clear and things went back to normal until the next time, which very well may not be too far off. The closer Kerry gets to the finish line, the closer Israel's political establishment gets to a boiling point. The most recent idea (which is actually an old idea that was entertained in previous rounds of negotiations), according to which settlers would live under Palestinian sovereignty, awakened all the demons.

It is against this backdrop that the silence of Israel's foreign minister, Avigdor Liberman, is conspicuous. At the present time, Netanyahu has a carte blanche — unlimited credit from Liberman — to meet Kerry halfway and say "yes" to any proposal he makes.

It's not that Evet (Liberman) suddenly fell in love with the Arabs or became convinced that former Minister Yossi Beilin is right. An astute politician, Liberman realizes that he cannot compete with the radical right, with characters like Bennett or the radical "Tkuma" rabbis. He realized that he would be better off succeeding Netanyahu rather than Bennett. At this time, Liberman is the responsible adult in this commotion. He says, in his own voice, that Israel will not get a better offer and that there will be no better broker than Kerry. He maintains that all the other alternatives are worse, that Israel has no choice but to understand the constraints and that it should not call it quits. Liberman does not think that peace will be achieved next year or in this decade, for that matter. However, he does think that it is better to let the Palestinians be the intransigent side. Israel should say yes, Liberman contends, with the hope the Palestinians will say no. At that point, it will stand to win on all counts. It won't have to implement the real concessions on the ground while earning at the same time maximum legitimacy at a minimum price for an almost unlimited time.

Even back then, when they had an unshakeable leader such as PLO Chairman Yasser Arafat, they said no. So today, when they do not have a strong leadership and are divided between two entities, can they say yes?

And what if they do say yes? Great. There will be peace.