Justice Minister Tzipi Livni has been calling from every imaginable forum for a reboot of the negotiations, but given the Netanyahu government’s diplomatic stalemate, it is time for her to resign. 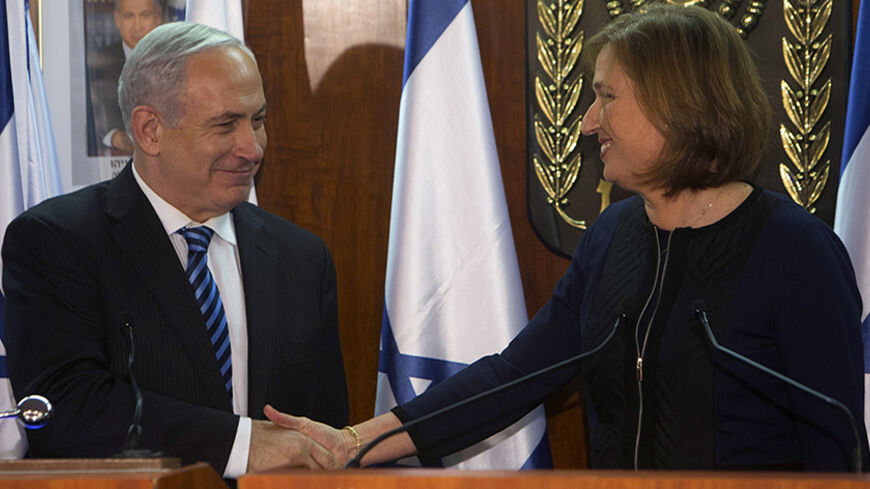 “It was last Yom Kippur, five months after I left the Knesset. While spending the fast with my family, I told my children that I was being called to the flag. The Israeli public was heading to elections, and so many people felt like me that the country was in decline, that there was no alternative to the prime minister either individually or ideologically, and that there was no one to represent our positions to the issues most critical to Israel’s future. Then I asked them what they thought. ‘Fight,’ they said. ‘Fight for us.’ Well, I’m here to fight.”

That was how Justice Minister Tzipi Livni began her comeback speech, when she announced the creation of the Hatnua Party on Nov. 27, 2012, about half a year after resigning from politics upon losing the Kadima Party leadership to Knesset member and former Defense Minister Shaul Mofaz. During her speech, members of the Labor Party were demonstrating outside the hall. They accused Livni of splitting the center-left bloc unnecessarily by creating a new party instead of joining an existing one.

But Livni never looked back. She rejected all of the initiatives to unite the center-left bloc into an alternative to Prime Minister Benjamin Netanyahu. With an arrogance that has become her calling card, she refused to be the “No. 2” person in a list headed by Finance Minister Yair Lapid or former Labor Chair Shelly Yachimovich, even though they both did better than she in the polls.

Once the elections were over, Livni was the first person to join the Netanyahu government with her six seats. After the briefest of negotiations, she received the Justice Ministry, was put in charge of negotiations with the Palestinians and was made a member of the Diplomatic-Security Cabinet. She explained her decision to join forces with a man who she had disdained for years by calling it an opportunity to bring the conflict with the Palestinians to an end.

Former Minister Haim Ramon, a member of Livni's camp within the Kadima Party, was shocked by the move. In private conversations he said that she had caused considerable harm to the center-left bloc, when giving her six seats to Bibi (Netanyahu) as a gift.

Now, one and a half years into Netanyahu’s third government — a government where Foreign Minister Avigdor Liberman and Economy and Trade Minister Naftali Bennett set the tone — Ramon’s harsh remarks have proved themselves to be excruciatingly accurate. The peace process blew up in April, and much against its will, Israel was soon caught up in a deteriorating security situation. What began with the abduction and murder of the three teens on June 12 devolved into a lengthy military campaign: Operation Protective Edge.

Over the course of the campaign, and especially toward the end of it, Livni did speak up in support of the urgent need to renew the diplomatic process. According to reports in the Israeli press, she even got into a shouting match with Defense Minister Moshe (Bogie) Ya’alon at a Cabinet meeting. “It’s a mistake to make do with just stopping the fighting, like we are doing now, without doing anything else,” Livni raged at him.

In interviews she gave once Operation Protective Edge was over, Livni warned, “There is going to be a diplomatic intifada.” She told reporters that if Israel continued avoiding negotiations with Palestinian President Mahmoud Abbas, “We will be isolated.”

Livni sounded convincing as always and driven by a firm belief in what she was saying. She sounded as if she was saying the right, and courageous, words. Furthermore, no one has any doubt that Livni, a former Likud princess who “wised up,” believes in the idea of a two-state solution and that the conflict can be brought to an end. After all, that was what led to her enormous victory in the 2009 elections, when she won 28 seats.

It’s time to ask Livni what she is doing to fight for the agenda that brought her back to the political arena. After all, she herself has admitted that she dislikes the political gamesmanship. In fact, she finds it agonizing.

Now especially, with the emergence of opportunities to forge new regional alliances against Hamas and other Islamist movements, Livni could try to muster all her strength and push for a diplomatic initiative that would lead to a regional conference, much like the model proposed by Lapid. She could do it because, unlike Lapid, she has the connections and years of experience conducting negotiations.

Nevertheless, time and again, not much happens when Livni gets to the practical stage. She could spend months in the negotiating room, as she did during the Annapolis Conference (2007), which was her pride and joy, or in the recent round of sterile negotiations she conducted on behalf of Netanyahu with Palestinian chief negotiator Saeb Erekat and US Secretary of State John Kerry. At the end of the day, she has nothing to show for it. Even during the three years she spent as head of the opposition and leader of a party with 28 seats, she failed to create an agenda or to challenge the Netanyahu government’s diplomatic stalemate by presenting her own creative diplomatic program. When Shaul Mofaz, her No. 2 in the party, presented an original diplomatic plan for an interim agreement, she rejected it out of hand, and with no small degree of arrogance at that.

Yet despite all that, she continues to be appreciated by the center-left bloc.

As the end of Operation Protective Edge slips farther and farther into the past, there are growing indications that Netanyahu’s talk of “a new diplomatic horizon” has no practical meaning. Just last week, on Sept. 2, the Americans were surprised to hear the publicized decision to expropriate almost 1,000 acres in the Etzion settlement bloc. At the same time, US Secretary of State John Kerry decided to cancel his visit to the region. After speaking with Netanyahu and Abbas, he realized that the time was not yet ripe for a renewal of the diplomatic process. In the background, Liberman was attacking Abbas yet again by claiming in a briefing to reporters that the chairman of the Palestinian Authority lacked the legitimacy to sign any agreement whatsoever.

And what has Livni been up to all this time? According to her Facebook page, she tore up a pro-Palestinian poster she encountered while on a family vacation in Greece. This bizarre act of vandalism was met with a cold shower of cynicism on the social networks. It is hard to believe that Livni, whose struggle for peace earned her a place on the Time magazine 100 list of the most influential people in the world as recently as 2007 could take pride in such an embarrassing incident. It remains unclear what she hoped to achieve, apart from the act of vandalism itself. Was she preparing herself for the next elections? Or was she trying, perhaps, to draw attention away from the fiasco of her continued participation in the current government?

It’s time for Livni to look her voters directly in the eye and admit that she has failed at her task. She will have to bid farewell to her minister's seat and resign from a government that has no intention of initiating any diplomatic process whatsoever. That way, at least, she would be validating her commitment to peace.