The withdrawal of Hatnua head Tzipi Livni from the Israeli elections indicates that Israel is further than ever from the two-state solution she fought for. 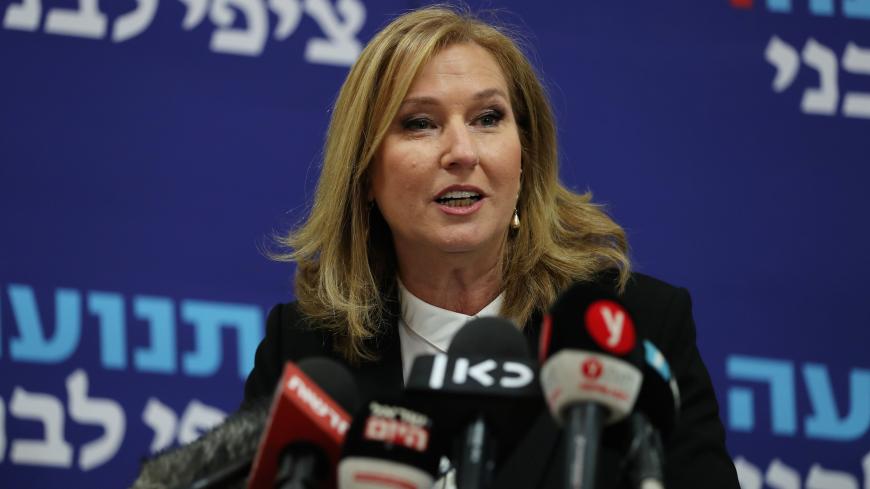 Right after Israel Resilience head Benny Gantz launched his election campaign, Hatnua suffered a final collapse in the polls. Gantz’ party almost doubled its strength within a day at the expense of the other center-left parties. Inevitably, the headlines referred to the phenomenon as the “Gantz effect.” Its main victims were the Labor Party, which plunged to the single-digit range; Yesh Atid, which lost several precious seats; and Knesset member Tzipi Livni's Hatnua, which was just within arm’s reach of the electoral threshold.

Labor chair Avi Gabbay delivered the first blow when he ended their partnership on camera Jan. 1, splitting the Zionist Camp alliance. Then Gantz stepped in with the death stroke.

Until just a few days ago, Livni was in touch with people close to Gantz about a possible merger, though it remains unclear how serious the talks were. In the end, they also shut the door in her face. Even if she was never told so explicitly, in its efforts to draw voters from the soft right, the Israeli Resilience party was keeping its distance from the centrist banner and the diplomatic solution with which Livni was so closely identified.

Livni called a press conference on the afternoon of Feb. 18. With tears in her eyes, she announced that she was dropping out of the upcoming election. She could have drawn the process out a bit longer — the deadline for submitting party lists is Feb. 21 — but she decided to put a stop to everything, admitting that as things now stand, she lacks the political strength to see her vision, diplomatic negotiations with the Palestinians to advance a two-state solution, fulfilled.

“The last few years have been especially hard for me,” she said. “‘Peace’ became a rude word. … Attempts to separate from the Palestinians were replaced with ideas of annexation, which would lead to an Arab majority. … Throughout this, I never hid my path or my vision.” Toward the end of her remarks, she added that she would never forgive herself if votes for her ended up being wasted.

Livni’s forced exit from the game marks the end of a political era that began around the time of the Oslo Accords, before she was first elected to the Knesset. It was the first time that Israel began implementing a diplomatic plan based on the idea of partition, a real political earthquake. The concept has taken center stage in every election since.

Livni was a Likud member when she was first elected to the Knesset two decades ago. Her worldview changed with the realization that to preserve Israel’s democratic nature, the only option lies in separation from the Palestinians. She left the Likud in 2005, together with late Prime Minister Ariel Sharon, and was one of the founders of the centrist Kadima, which advocated for this position. From there she became a political shooting star.

When elected head of Kadima in 2008, her agenda became a showcase for the party. Livni was so convincing and her campaign for prime minister one year later so overwhelming that she almost eliminated Meretz, the tiny party identified with the ideological left. Voters on the left believed that if they threw their support behind Livni, she would give them a historic diplomatic agreement.

Over the years, Livni became something of an international icon, perhaps second to late President Shimon Peres, in advocating peace when Peres was still alive. In Israel, however, she turned out to be much less successful as a politician than Prime Minister Benjamin Netanyahu. After Prime Minister Ehud Olmert resigned in 2008, then-President Peres tasked her with forming a new government. She failed and Israel held a new election. In that election, in 2009, she won one seat more than Netanyahu (28 to 27), but in the end, he put together the next government. Over time, Livni lost control of her party. Its senior members betrayed her, citing her poor interpersonal skills, but they also must have realized that in the end, she could not deliver the political goods.

After her 2012 defeat to Shaul Mofaz, Livni left Kadima. Nevertheless, the polls still showed that she had considerable political strength, so she founded her own party, Hatnua, in which she was the final arbiter. She came away from the 2013 election with six seats, enough to give her the Justice Ministry and a mandate to negotiate with the Palestinians on behalf of Netanyahu’s third government. She flourished, which shows that during those years, even Netanyahu operated within the political realm of a two-state solution.

But this partnership also came crashing down. Netanyahu fired her and Finance Minister Yair Lapid in late 2014, leading to a new round of elections. Then, she rose like a phoenix from the ashes and found herself a new political home, this time by joining forces with Labor. With that party’s leader, Isaac Herzog, she founded the Zionist Camp. It soon became an alternative to the governing party and a threat to Netanyahu himself. The party emerged from the 2015 election with an impressive 24 seats, but was overshadowed by the Likud, which soared to 30.

Livni could be described as someone who jumped from party to party in order to survive. She could even be called an opportunist for joining the Netanyahu government in 2013. But what can never be taken from her is her diplomatic agenda. More than anyone else in Israeli politics over the last few years, Livni came to be identified with the two-state solution. It’s not that Meretz or the Labor Party didn’t talk about it; she was simply its best spokesperson, particularly because she grew up in a Revisionist (right-wing) home and was so deeply entrenched in the Likud. To her credit, it must be said that she never abandoned her diplomatic vision. In many ways, she sacrificed herself for it. Politics is a brutal game, and this week Livni reached the end.

But this is not just the personal saga of a rise and fall, but the end of an era in Israeli politics. A decade of Netanyahu rule have made dust of the notion that the Palestinians are legitimate partners for peace, leaving Livni without a political base. Her retirement is the final blow to her quest for a two-state solution.