After another apparent failure in negotiations, Israeli chief negotiator Tzipi Livni wriggles out of giving real explanations for the fact that she continues to remain in the right-wing government, thus betraying her center-left constituents. 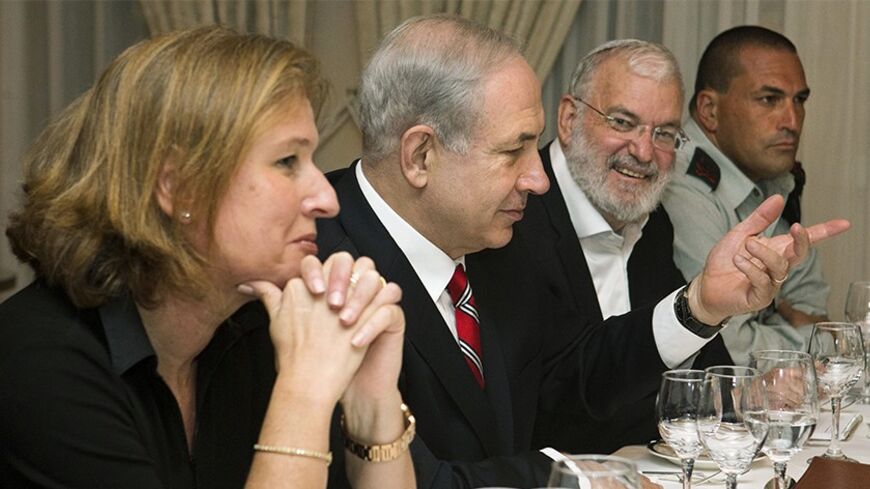 “When I look back, one of my conclusions is that we need to hold bilateral talks between us and them. And also between the prime minister and [Palestinian President] Mahmoud Abbas.” In this offhand statement uttered by Justice Minister Tzipi Livni on the Meet the Press Saturday night (April 5), the Israeli chief negotiator with the Palestinians revealed the truth about what transpired the last eight months in the meeting rooms — or more correctly, about what did not take place.

Livni, who gave only a few interviews in recent months, made an exception on the background of last week’s blowup in the negotiations. The talks were cut off after Israel delayed the fourth stage of the release of security prisoners, and in response the Palestinians made an official bid to the UN to become a signatory to 15 international conventions. Both steps were taken contrary to previous commitments of the sides. This moment should have been one of soul-searching for Livni. Many of her supporters in the Israeli public, who gave six mandates to her party in the last elections only to promote the diplomatic process, were unhappy with her being part of the Netanyahu government next to far-right elements. That was the moment when she should have taken responsibility and given them clear answers regarding her past decisions and future intentions.

Instead, these days Livni is blaming everyone except herself. She threatens the Palestinians with sanctions if they do not return to the negotiating table, and on the Israeli side she blames Housing and Construction Minister Uri Ariel (of the HaBayit HaYehudi Party), whose ministry announced a tender for the construction of 700 new residential housing units in Jerusalem’s Gilo neighborhood. It's strange that the minister in charge of negotiations is the last one to find out that what transpired in the discussion rooms was nothing but a stalling exercise for both sides. That both Palestinian President Mahmoud Abbas and Prime Minister Benjamin Netanyahu sent negotiating teams only because of US pressure, without real desire or belief that an agreement could be achieved.

Livni has served in key positions within the diplomatic process for more than a decade. She became the great hope of Israel’s left-center because of her dovish approach and her raising of the dialogue-with-Palestinians banner, first within the Likud Party and then in Kadima. As foreign minister in Olmert’s government (2006-2009), Livni won much acclaim in the international community. She exploited her excellent reputation and renown after the last elections when she was the first to join Netanyahu’s government; until then, she had called him an "obstacle to peace." After very brief coalition negotiations, the HaTenua chairwoman raced headfirst into one of the most right-wing governments that ever existed in the annals of Israel’s history. In talks held behind closed doors in those days, former Minister Haim Ramon (the man who viewed her until that point as an alternative to Netanyahu) said that Livni’s entrée to the government caused damage to the left-center camp. He felt that the six mandates received by Hatnua Party, were handed over by Livni to the Likud on a silver platter.

All these months, Livni’s Hatnua associates Knesset members Amram Mitzna and Amir Peretz — both of whom originally hailed from the Labor Party — backed her up. It's an open secret that both expressed skepticism regarding the nature of the negotiations in recent months. Once, Mitzna and Peretz said they didn’t really know what was taking place in the negotiating rooms and that Livni did not update them with details and only gave them the impression that Netanyahu had serious intentions. While Mitzna called for quitting the government if no tangible progress was made, Peretz was more moderate.

However, both can be problematic for Livni if they demand that she resign from the government. In addition, the Hatnua Party could even split.

Meanwhile, Livni has gained a limited time period of intra[-party] peace and quiet.

From Netanyahu’s point of view, recent days proved to him that he’d acted with great political and diplomatic acumen when he included Livni in his government and appointed her to be in charge of the negotiations. In this way, he received an upgraded version of the function filled by former Prime Minister Ehud Barak in his previous government — a figure viewed by the world as a peace-warrior who "whitewashed" the right-wing government and mollified the international community. Netanyahu was well-acquainted with Livni and understood that he did not really risk a confrontation in the coalition, since the Hatnua chairwoman would never succeed in achieving a breakthrough with the Palestinians.

We can only imagine what would have happened if the prime minister’s emissary to the negotiations had been a figure like President Shimon Peres, former Minister Yossi Beilin or even Knesset member Shaul Mofaz. None of them would have rested on his laurels. Peres is an excellent example of a foreign minister who succeeded in bringing a prime minister to the negotiating table by virtue of the force of his vision, faith and creativity, thus ultimately leading to the signing of the Oslo Accord. Beilin, though he never rose to a position of influence in the government, used the virtual Geneva Initiative to exercise great public pressure on late Prime Minister Ariel Sharon. This contributed to the implementation of the disengagement from Gaza and North Samaria (among other things).

Even Shaul Mofaz, who's viewed as a dogmatic military person, demonstrated creativity and diplomatic-security acumen when he conceived the "interim agreement" idea that included international guarantees during the term of the previous government. At the time, he was in the opposition and ran against Livni for leadership of Kadima. Out of political calculations, Livni thwarted discussion of Mofaz's plan.

The left-center people who elected Livni did not send her into the negotiation rooms to cast the blame for the impasse on the Palestinians or on right-wing elements who are sabotaging the process. The justice minister has accumulated enough negotiating hours with the Palestinian Authority in the last decade to know whom she would be facing in the discussions, and also knew in advance whom she would face in her own government. Now she should have taken responsibility and provide true answers instead of worn-out excuses, blaming the right wing and the Palestinians.

We do not need Livni to tell us that the process is painful and complex and that elements on both sides want to sabotage it. Livni should have known in advance that there was no chance to achieve significant progress, in the absence of a direct channel for talks between the leaders of the two nations. The establishment of such a channel was the only achievement that could justify her remaining in this right-wing government.

So long as such a thing is unachievable, Livni has become a faithful emissary of Netanyahu instead of an emissary of the public.