In an interview with Al-Monitor, former Minister Yossi Beilin blames the Americans for insisting on a final status agreement instead of working on interim arrangements like former President George W. Bush’s road map. 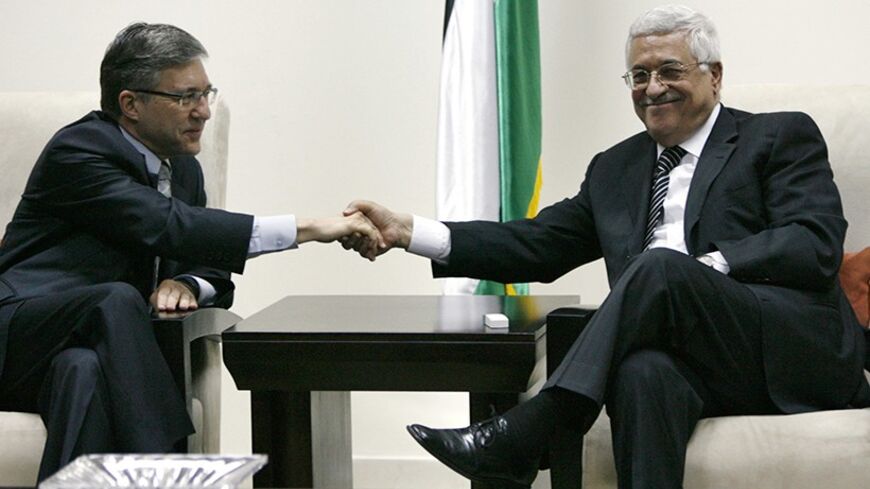 Throughout all the months of negotiations led by US Secretary of State John Kerry, former Minister Yossi Beilin asked himself what, exactly, the Americans were trying to do and why they didn't understand that the attempt to reach a final status agreement is futile. The former Meretz chairman, who was also one of the architects of the Oslo Accord and the Geneva Initiative, hoped that perhaps there was information he was not privy to. But he knew very quickly that, as he had foreseen, no good would emerge from this round of talks.

In a May 28 interview with Al-Monitor, Beilin argues that assuming a permanent arrangement is not possible at this stage, the only implementable solution is an interim arrangement along the lines of former US President George W. Bush’s road map. And like those who preceded him, Beilin criticizes the way the Americans mediated between the sides in the recent months. The text of the interview follows:

Al-Monitor:  As an expert with experience in negotiating with the Palestinians, why was the current round of talks unsuccessful?

Beilin:  I keep trying to figure out what it was about. What did Kerry really think when he began the process? What was his basis for thinking that [Prime Minister Benjamin] Netanyahu would be ready, at least at this stage, to agree to what is necessary to reach a permanent arrangement? Why did he think that [Palestinian President] Mahmoud Abbas could commit on Hamas’ behalf that if a peace agreement is signed between both sides, there wouldn’t be rockets from Gaza? I am not saying this rhetorically. I truly do not understand.

Ever since Netanyahu rules Israel and since Gaza is not in Mahmoud Abbas’ hands, I have been talking about the option of achieving a partial road map agreement and that is the message I transmitted to the Americans, to our side and to the Palestinians. But when Kerry began and started saying that he only wants a permanent arrangement, I sort of kept quiet.

I thought, "If he is so supportive of a permanent arrangement, why should I be the stupid one to tell them, 'Go for an interim arrangement?'" I hate interim arrangements. I was opposed to the road map. I thought to myself, "Perhaps Kerry, whom I do not consider by any means to be a foolish person, maybe he talked to both sides in advance and knows something that I don’t, something that I didn’t understand from them." And truly, at a certain stage it looked like there was progress and I was very happy because I thought maybe something good is going on. And then it turned out that there were no surprises, and what happened is what most of the Middle East pundits and followers of Middle East affairs had anticipated. That it has no chance at all.

Al-Monitor:  What will be the implications of the failure?

Beilin:  When something like this fails, it places the sides in an even worse position than it was at the beginning. Clearly the situation today is much more problematic, because an argument is being generated now over who is to blame, and there is also some sense of frustration. This frustration facilitates violence, because in such a situation of failure, violence is always around the corner. That doesn’t mean that violence will necessarily develop, but the return to violence is much easier in the absence of a process that tries to lead to something.

Al-Monitor:  Who is to blame for the failure?

Beilin:  In my opinion, the Americans bear most of the blame, that they didn’t understand this point. President [Barack] Obama’s time-out statement is the most irresponsible thing in this current setting. If you, the Americans, haven’t grasped what is really happening here, and you thought that it was really possible to reach a permanent arrangement with Netanyahu’s public and not-so-public positions and Mahmoud Abbas’ lack of control in Gaza, you can’t say, "You disappointed us and now we’re going somewhere else." You need to propose an alternative to what you offered. Otherwise, if there is a deterioration here, your responsibility for it will be very high.

I was truly happy about Kerry. I didn’t expect that the American administration would return to us and I saw Obama’s pattern of behavior. In other words, he says all the right things that would cause me to vote for him if I had the right to vote. But he is a serious disappointment with everything related to performance, so when suddenly he sent Kerry — or Kerry sent himself — I was definitely delighted. All that I did try to transmit to the Americans was: Don’t even try to reach a permanent arrangement.

Al-Monitor:  What did you explain to them? That Netanyahu is not capable of it?

Beilin:  No. Netanyahu is definitely able, but he is not there ideologically. It’s not the issue of [Economy and Trade Minister Naftali] Bennett stopping him or of something else. He says it outright: "I am not partitioning Jerusalem, I am not returning to the 1967 lines, I am not allowing the return of a single refugee." Beyond that, we all understand that if tomorrow there is a permanent arrangement requiring the new Palestinian state to abstain from any violence against Israel, it will not be binding on the Islamic Jihad in Gaza. Mahmoud Abbas does not have the ability to control that.

Al-Monitor:  Therefore, only an interim arrangement is possible?

Beilin:  I say that we need to return to the road map: a Palestinian state in the West Bank in interim borders with the knowledge that it does not include Gaza and that Mahmoud Abbas has no control over Gaza, and that the Jerusalem and refugee issues are not included. In addition, we have to reach a security arrangement between the Palestinian state and Israel, and an agreement over parameters restricting settlements to the territory that will remain in Israel’s hands. Israel and the Palestinians have both agreed to this. This is not some kind of crazy plan concocted by Yossi Beilin, that here he goes again inventing something new. The Palestinians accepted this 100% without a single reservation; Israel accepted it under [late Prime Minister Ariel] Sharon with 14 reservations that were all brushed off by the Americans, but Israel did accept it. So they should accept it now. Do we have anything else?

Al-Monitor:  Do you believe that Netanyahu with his right-wing government can advance any kind of arrangement?

Beilin:  Yes, certainly. Netanyahu is in an excellent political situation. He can exchange Bennett for the Labor Party. Also Meretz, the Arab parties and what is left of the Kadima Party would back him in a diplomatic process.

Al-Monitor:  Do you share the warnings of the left regarding a binational state and the end of the Zionist enterprise if there is not a diplomatic arrangement?

Beilin:  No. We are not going there. Should there be a situation where a Jewish minority controls a Palestinian majority to the west of the Jordan River, then the prime minister at that time — if he is not a man of peace but someone of the sorts of Prime Ministers Shamir, Sharon or Netanyahu — he will opt for a unilateral move. Netanyahu already alludes to this very bluntly. [Former Israeli Ambassador to the United States] Michael Oren said this in an interview. This prime minister will pull back to a border that has already been constructed by another Likud prime minister called Ariel Sharon. This boundary is the fence. It is a question of a few years. As soon as headlines around the world announce that a Palestinian majority exists to the west of Jordan, a Zionist prime minister who is not willing to pay the price for a peace agreement will have no recourse but to opt for a unilateral withdrawal. Clearly, if he is a prime minister like [the late Yitzhak] Rabin, [Ehud] Barak or [Ehud] Olmert, he will go for a Clinton- or Geneva-type agreement. I don’t envision a situation in which a Jewish minority will control a Palestinian majority over time.

Al-Monitor:  Do you see a left-wing leader today in the arena who can lead a process of partitioning the country?

Beilin:  Rabin and Olmert were born leaders. But since they had a basis of understanding regarding the need for a diplomatic arrangement for Zionist reasons, they were willing to pay the price. I assume that if today [Labor Party Chair Isaac] Herzog is elected, he could initiate such a process because first and foremost, it’s a matter of one’s worldview. And in my opinion, Buji has the correct outlook.