Netanyahu, Abbas rush to meet, but Americans say 'not so fast'

The Obama administration is not keen on a summit meeting between Prime Minister Benjamin Netanyahu and President Mahmoud Abbas, fearing that without proper preparations, it could upset the already fragile situation. 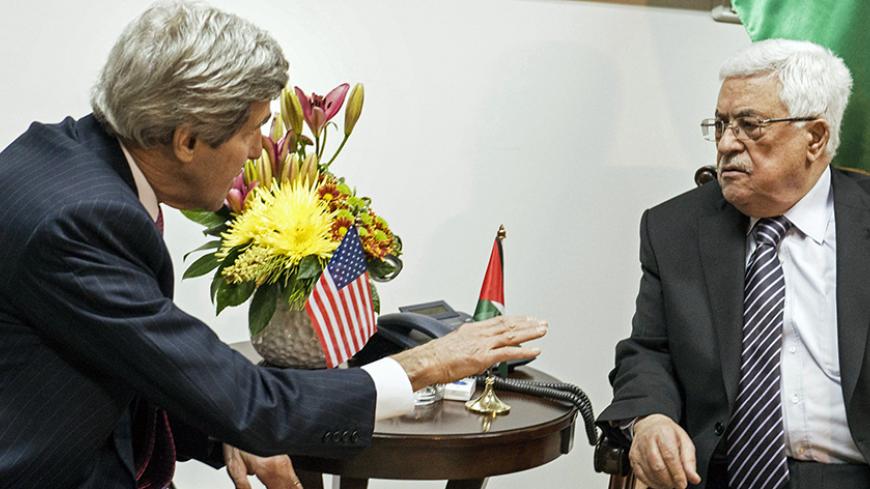 US Secretary of State John Kerry (L) and Palestinian President Mahmoud Abbas talk at a meeting at the presidential compound in the West Bank city of Ramallah, Jan. 4, 2014. - REUTERS/Brendan Smialowski

After meeting in Paris with four former Israeli ambassadors Sept. 21, Palestinian President Mahmoud Abbas reportedly said that he would be willing to meet with Israeli Prime Minister Benjamin Netanyahu. The problem, he said, was that a “third party” was preventing such a meeting from taking place. The Palestinian leader meant the Americans, more specifically, Secretary of State John Kerry, who will meet Netanyahu Oct. 1 in New York.

While American sources claimed Abbas’ statement was “inaccurate,” senior Palestinian and Israeli officials alike confirmed that the Americans were not enthusiastic about such a meeting taking place. They believe it would be explosive and cause the situation to deteriorate even further. The Americans have learned from experience. They bear the battle scars of countless disappointments. They would therefore prefer to spend time preparing for such a meeting, honing positions, coordinating expectations and going for a sure thing.

For the past few months, the Americans have been very concerned that they could lose Abbas. The Palestinian president’s status among his own people is getting weaker by the day, and demonstrations against him are turning violent. A quiet uprising of sorts against him is already underway in the refugee camps, and it erupts every so often. In some instances, there has even been an exchange of fire between insurgent Palestinians and security forces. The last thing Kerry wants to see is Abbas resign or be deposed and have the West Bank slip into administrative and military chaos. He’s already had enough problems like that.

The real drama is taking place behind the scenes on various fronts. Kerry met recently with the leader of the Israeli opposition, Knesset member and Zionist Camp head Isaac Herzog. While both sides deny they discussed the political situation, it is quite safe to assume that they did not skip over the topic.

Herzog is in the middle of advanced negotiations to join the current government. Netanyahu made him a very tempting offer in which Herzog’s party would receive the Foreign, Defense and Justice ministries. Herzog does want to join the government. He knows that the position of defense minister (offered for just half a term, in another year and a half) could help him overcome his image as a weakling and give him that special something he needs to become prime minister. Before he can join, however, he will have to convince his own party’s Central Committee to extend his term as chairman until late 2017. That is what Netanyahu wants in exchange for the deal. The prime minister is not willing to forego all these strategic assets only to see Herzog deposed a few months later and replaced with a new party chair who will lead the Zionist Camp out of the coalition. If that happened, Netanyahu would be exposed in every direction.

Kerry still hasn’t given up his dream of diplomatic negotiations between Israel and the Palestinians, but he is also a lot wiser now. He realizes that there will be no permanent arrangement between the parties during his term. The question, then, is what will there be instead.

Kerry and the peace team he put together (which has since come apart) are committed to achieving something. They have no interest in leaving the negotiations in ruins. It is quite possible he would prefer that negotiations were renewed after Herzog joins Netanyahu’s government and leads it to the political center. Not only is Netanyahu’s current government incapable of conducting negotiations, it wouldn’t last the first 15 minutes. Bringing 24 new Knesset members from the center-left into the coalition would turn this government into something very different. I assume that Kerry is kept abreast of the secret contacts between Herzog and Netanyahu and is keeping his fingers crossed for them.

But there is another issue that is even more significant. On Sept. 2, Al-Monitor revealed that in his meeting with Abbas on March 17, 2014, President Barack Obama handed Abbas a proposal for a framework agreement with Israel. This proposal was based on an earlier draft of a framework agreement reached between the Israelis and the Americans. That agreement was the outcome of intense negotiations between Kerry, Netanyahu and their respective staffs, conducted over many long weeks via video conferencing. The talks took place on an almost daily basis and lasted for hours. They eventually resulted in a very volatile document in which Netanyahu agreed to create a mechanism to rehabilitate the Palestinian refugees. He even agreed to take in a limited number of refugees (to be determined by Israel), as well as to the principle of the 1967 borders serving as the basis for each state (with land swaps).

The one point that Netanyahu refused to concede was the status of Jerusalem. The Americans inserted an especially explosive clause (making Jerusalem the capital of two states) and presented it to Abbas.

The Palestinian leader has been true to form and has yet to respond to Obama’s proposal. Kerry seems concerned that in any potential meeting between Netanyahu and Abbas, this draft will be raised for discussion. The ensuing explosion would be nuclear. There is no way Netanyahu could survive politically once that happened. When the Americans informed the Israelis about their changes to the draft, the Israelis responded with a shrug. Netanyahu’s adviser, attorney Yitzhak Molcho, told the Americans, “You can add whatever you want. The Palestinians will still say no.”

Molcho was almost right. Abbas is not the kind of leader who says no. But he simply doesn’t answer. He didn’t answer Obama in 2014, just like he didn’t answer Prime Minister Ehud Olmert in 2009. Given the current state of affairs, Kerry would rather see political change in Israel before the negotiations are renewed. Such change will be needed to lay the groundwork for a renewal of the negotiations with even greater care than before the last round of talks.