Is Abbas leaving legacy of failure?

For the moment, President Mahmoud Abbas' legacy is commendable for rejecting terrorism in the Palestinian movement, but condemnable for not accepting peace proposals with the caveat of continuing to negotiate the details. 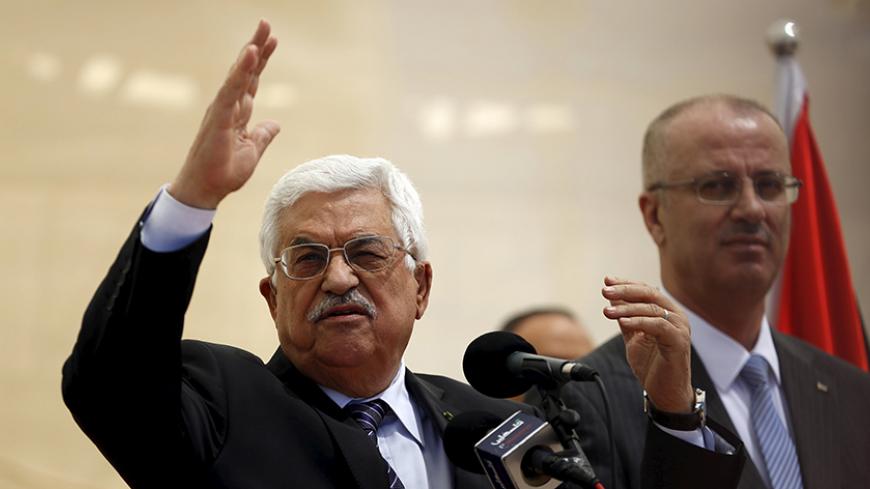 Palestinian President Mahmoud Abbas gestures as he speaks during the opening ceremony of a park in the West Bank city of Ramallah, April 5, 2015. - REUTERS/Mohamad Torokman

Palestinian President Mahmoud Abbas announced Sept. 1 that he intends to resign from the Palestine Liberation Organization's Executive Committee leadership. This could be evidence of another stage in the Palestinian leader’s decision to quit and walk slowly into the sunset, as speculated in Al-Monitor and other places. It could also, however, be a step intended to leverage additional pressure on a “Don’t let me go” scenario, in which Abbas has no intention of leaving the Muqata, Palestinian Authority headquarters in Ramallah; rather, it could be part of internal Palestinian political machinations intended to shake off Abbas’ local challengers and perpetuate his rule.

Regardless, Abbas, also known as Abu Mazen, has already celebrated his 80th birthday. During that time, what has he achieved for his people? How will he be remembered in the annals of the narrow, tormented strip of land between Lebanon and the Sinai desert, on the southeastern shore of the Mediterranean Sea?

It will take a long time for history to render its final judgment, and even then, the verdict will depend on the eye of the beholder. The Palestinians will remember him differently from the Israelis, the Europeans differently from the Americans, and so on. Nevertheless, a bird’s-eye view of Abbas reveals him to be a man of opposites: He is the bravest Palestinian leader, and he is also the most cowardly. With regard to one issue, he made the most difficult decision, while with regard to another issue he hesitated and ran away, the two being the core issues in which the Israeli-Palestinian conflict wallows: terror and peace.

As far as terror is concerned, Abbas will be remembered as the one who extricated his people from the path of terror while demonstrating leadership and no small amount of personal courage. He was the first Palestinian leader who came out against terrorism, even while former PLO chairman Yasser Arafat was still alive. Arafat had led the terror bandwagon his whole life and orchestrated the rivers of bloodshed in the second intifada (2000-2005). Abbas made a strategic decision, acknowledging that terror only harms the Palestinian people, and succeeded in doing the unbelievable: He built a strong PA, cleaned up the streets, kicking out the various gangs, and achieved almost full control over PA-administered West Bank territory in implementing the principle of “one law, one weapon, under one authority.” He did all this against all the odds and in the face of Israel’s conspicuous skepticism.

When it came to peace, however, Abbas scores a complete failure. He did not have the necessary courage to adopt one of the many excellent offers he received over the years and say, “Yes, but …” He didn’t have to accept a proposal verbatim, but he could have accepted it as a basis for an agreement while negotiating over the details.

One such example was the unofficial Beilin-Abu Mazen Document (1995). The Palestinian leader later denied what had been achieved between him and Minister Yossi Beilin, thus passing up the opportunity to turn the Oslo Accord into a permanent arrangement. The same thing happened with former Prime Minister Ehud Olmert’s courageous (bordering on lunatic) 2008 proposal. Abbas didn’t even bother to reply, using the flimsy excuse that Olmert was a lame duck. That offer was very far-reaching: the Palestinians were offered about 96% of West Bank territory and territorial exchanges for the rest, a compromise on Jerusalem and the return of a limited number of refugees (at Israeli discretion). If Abbas had only said, “Yes, but …” to this offer, his reply would have gone down in history as a milestone in the negotiations. Instead, he ran away.

Few people are aware that there was a third proposal. Abbas received it on March 17, 2014, at a meeting with President Barack Obama in Washington. Abbas received a version of a framework agreement between Israel and the PLO, and he was supposed to reply either yes or no to the Americans. They gave him eight days to consider the offer; an answer was expected on March 25, four days before the deadline for implementing the “fourth pulse,” the fourth agreed-upon release of Palestinian prisoners, those imprisoned before the Oslo era. This stage was supposed to enable the continuation of negotiations, which the Americans wanted to renew on the basis of the framework agreement. To this day, they are still waiting for Abbas’ answer.

The framework agreement offered to the Palestinian leader by the American president was based on another framework agreement, drafted by Israel and the United States in marathon negotiations held by US Secretary of State John Kerry with Israeli Prime Minister Benjamin Netanyahu over five weeks. These negotiations were conducted via dozens of long, daily video conversations, sometimes even twice a day, between the Israeli and American teams. It was a supreme American effort with ups and downs that ultimately led to the formulation of a document that served as a draft for a framework agreement. Netanyahu retained his margin of safety and “wiggle room for denial” of this explosive paper by calling it the “American proposal.” In truth, however, the details were formulated in front of him and his people, attorney Yitzhak Molcho and Justice Minister Tzipi Livni.

The problem arose later in the White House when National Security Adviser Susan Rice declared that the document was pro-Israeli. Rice ordered that its principles be compared against those of former President Bill Clinton's parameters and proved her claim. In light of the difficulties that arose vis-a-vis the Palestinians, the White House decided to revise several clauses of the framework agreement to the benefit of the Palestinians.

In the original framework agreement, the Americans accomplished two goals: They obtained Netanyahu’s agreement to 1967 borders and territorial swaps as the basis for a settlement and agreement regarding the establishment of an international apparatus for dealing with the refugees, including an Israeli commitment to accept the return of a limited number of them to Israel on a humanitarian and family unification basis, subject to Israeli discretion.

As far as the Palestinians were concerned, the biggest weakness of the original paper was the issue of Jerusalem. Netanyahu refused to budge on the matter. The paper included a vague clause noting recognition of the special connection both sides felt to Jerusalem and that no final settlement could be reached until the Jerusalem problem was resolved. Again, the Americans tinkered with the framework agreement, and the version given to Abbas included a clause recognizing “two capitals in Jerusalem.” The Americans did not receive explicit Israeli agreement for this revision, but according to several diplomatic sources who spoke to Al-Monitor on condition of anonymity, Molcho told them that as far as Israel was concerned, the Americans could revise the framework agreement to their heart’s content, “because in any case, President Mahmoud Abbas will say no.”

Molcho almost got it right. Abbas did not say no, because he hates saying no. He, therefore, simply did not answer.

Even if the American proposal Abbas received was imperfect, even if it was not optimal and failed to include all the Palestinians' demands, there is no doubt that it could have been an excellent basis for homestretch negotiations. Evidently, however, the Palestinian leader was not interested in such talks.

The Palestinian people are splintered and uncompromising and currently unable to make the difficult decisions and painful concessions required to end the conflict with Israel. Therefore, when history renders its final judgment on “the defendant,” Abbas, it will certainly include commendations as well as condemnations. Abbas has been, at one and the same time, a courageous yet cowardly leader, and he still is.