Dan Meridor: Struggle With Iran Will 'Shape the Middle East'

Departing Likud Minister Dan Meridor tells Mazal Mualem about the squandered diplomatic opportunities with the Palestinians, and how the struggle with Iran will shape the Middle East. 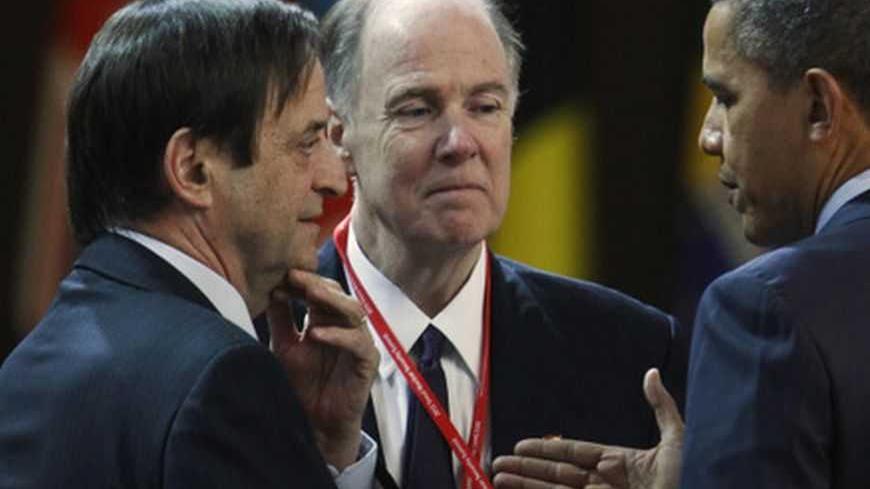 Dan Meridor will leave his present position in several weeks and return to the status of the citizen observing from the sidelines. It will be a forced farewell for the minister of intelligence and atomic energy from the centers of decision-making and the most exclusive security forums, after years dedicated mostly to the struggle to halt the Iranian nuclear program. Meridor devoted many hundreds of hours to this issue over the last four years, but the fact is, it did not help him in the primaries; the members of the Likud Central Committee ranked him in an unrealistic place in their list, and sent him home. Meridor was punished by the party that turned to the extreme Right, which ejected him from their midst because of his political moderation and his struggle to retain the independence of the Supreme Court.

The only person who could give him a position in the government as external minister is Prime Minister Benjamin Netanyahu, but Netanyahu has his own coalition trials and tribulations. Thus, even Meridor’s secret hopes to retain his place are dissipating.

At the age of 66, Meridor is realistic and sober. He has long since abandoned his one-time dream to head the Likud and run for the prime minister’s job. These aspirations suited the period of 20 years ago. Then he was still one of the “Likud princes” — together with Benny Begin and Michael Eitan, who were also sent packing with Meridor that same night when the primary results were publicized. Meridor was a natural to climb the party-hierarchy ladder, until he reached the spot where he halted. He lacked the requisite “killing instinct” to advance further. The fact that he was one of the first in the national camp to approve of the two-state solution to end the conflict with the Palestinians did not help him reach the top of the Likud pyramid.

This week, a moment before he takes his farewells from the government, I asked Meridor if he feels that his return to politics five years ago was worthwhile. Does he feel that he was able to wield influence, I asked. His answer was long and complex, but my impression was that he felt mainly positive about his decision.

In a special interview with Al Monitor, Meridor talks about Iranian nuclear plans as well as the diplomatic standstill — topics he followed closely.

Al-Monitor:  Where did negotiations with the Palestinians disappear to in the last four years?

Meridor:  The election campaign here created the illusion as if there is no Palestinian problem. Except for [Hatenua leader Tzipi] Livni, no-one talked about it. A kind of fallacy was created here, that we can live with the situation for generations, and that is definitely not correct. It is an anomaly. For forty-five years we have an anomaly, and it is not important who is right. I think that we are right, but things can’t continue this way. Therefore I hope that the government that will be formed now will deal with it seriously, because a continuation of the current situation is dangerous for Israel.

There is an illusion that since there is no terror, we can continue this way. I think that the thwarting of terror is not only our success, but also Abu Mazen’s strategy. But if we continue in the same path we are on today, without clear borders, in the end we’ll have one state from Jordan to the sea, and this, in my eyes, represents a threat to the entire Zionist vision. I think that the Palestinians also have an interest in changing the current situation.

Al-Monitor:  So what actually happened here?

Meridor:  Four years ago, we "had arrived." [Former Prime Minister] Olmert proposed a final settlement. He offered [Palestinian Chairman] Abu Mazen the entire territory, including partitioning Jerusalem, thus bringing an end to the conflict. Abu Mazen didn’t  accept it. That poses a very big question for us. Why didn’t Abu Mazen grab that proposal with two hands, after he had dedicated dozens of years of his life to the Palestinian issue?

I don’t have a definite answer, but the fact is that, until today, the two very far-reaching proposals submitted by Israel to bring, at last, an end to the conflict encountered Palestinian rejection. I was involved in one of them, with [then Prime Minister Ehud] Barak and [then Palestinian Chairman Yasser] Arafat in Camp David [in 2000]. The second one, proposed by Olmert, I also observed from close up. I am ready even tonight to sign an agreement, but I am not convinced that the Palestinian side is ready.

Al-Monitor:  Nevertheless, you said throughout all these last years that we have to continue to take action …

Meanwhile, the startling phenomenon of the Arab Spring took place. I see all this, I see what happened in Egypt and I know that when they turn this conflict into a religious one, there is no solution because God does not make compromises.

Al-Monitor:  So what have you done on behalf of this [solution] in the last four years? You were, after all, a high-level minister, you sat in the diplomatic-defense cabinet and the Forum of Eight…

Meridor:  I know exactly what I would have done. I am telling you my opinion. First, Israel needs to seek a final arrangement and be ready to conduct negotiations. I would have turned to the Arab League anew, to tell them: We invite you to negotiations.

Simultaneously, I would notify the world that we are stopping to build beyond the [settlement] blocs, because we have to coordinate our settlement policy with the peace policy. The situation today is that there is no coordination, because you can’t talk about a Palestinian state as a solution but continue to create settlements everywhere in the area. Therefore Israel should announce that it continues to settle only in those areas that will be part of the final agreement, in other words in settlement blocs and in Jerusalem.

We need to start to decide on the border, not to wait. An international agreement that is in the process of being formed is that the border will not be exactly like the 1967 borders, but will be based on 1967. That appears in Obama’s speech of two years ago, and appears in a letter from [then President] Bush to [then Prime Minister] Sharon. It even appears in the Geneva Accord of [Palestinian politician] Yasser Abd-Rabbo and [former Knesset Member] Yossi Beilin.

Meridor:  We talked about it a lot. We wanted negotiations for four years, after all Netanyahu delivered the Bar Ilan speech [2009], then went to the Knesset and said: I want the [settlement] blocs and Jerusalem. We froze [construction in] the settlements for 10 months, but Abu Mazen didn’t come. Therefore I don’t blame Bibi [Benjamin Netanyahu], precisely because we went far on this issue and you have to be fair.

Al-Monitor:  The Israeli government that you were part of, weakened Abu Mazen in recent years …

Meridor:  Abu Mazen is the leader of the Palestinian world today, and we don’t have a partner better than him. It is not my job to replace him and I don’t want to replace him, but I want to believe that he is looking for a way to come to an agreement. We, on our side, need to do everything in order to bring him to decide [to seek an agreement]. We shouldn’t sit by idly, doing nothing.

Al-Monitor:  There is the feeling that Netanyahu’s government only focused on the Iranian issue and neglected everything else?

Meridor:  That is not true. They did try. Netanyahu instituted a [construction] freeze that no one else did before him, and they [the Palestinians] didn’t come. You have to understand that the Iranian issue is important not only in the Palestinian issue, but also with everything connected to the Arab Spring. Regimes fell and simultaneously, the Iranian axis strengthened. That’s where the danger lies: if Iran, via the axis it created with Syria and Hezbollah, will be the dominant power in the Muslim world, that will be another world altogether. That is a subject of great importance not only in Israel, but also for the United States and the Arab world. The fact that most of the leaders of the Arab world want to stop Iran, show that they understand the danger for themselves.

In my opinion, this is the struggle that will shape the Middle East and the world order in the 21st century. If America was a super-power in the 20th century, and in the 21st century, it is not even capable of averting a nuclear Iran, then the message is problematic, and therefore we are engaged in a very important struggle.

Al-Monitor:  You cast all the responsibility for averting a nuclear Iran on the United States?

Meridor:  The Iranians lost tens of billions this last year, due to the sanctions. And for one reason only — they are not willing to halt their nuclear project. I think that the sanctions have already done an important service: Iran is not bursting into a full nuclearization process, but they haven’t given up, therefore I think that this is the right time for the American president to intensify the sanctions so that the Iranians will understand that they must stop.

Israel contributed a great deal to creating international pressure on Iran. I don’t want to say that only we did it, the American president did a lot and so did Europe, but it is possible to do even more.