Meridor: Israelis will back diplomatic initiative

In an interview with Al-Monitor, former Likud Minister Dan Meridor contends that if Prime Minister Benjamin Netanyahu takes the diplomatic route instead of the status quo, 70% of the Israelis will back him. 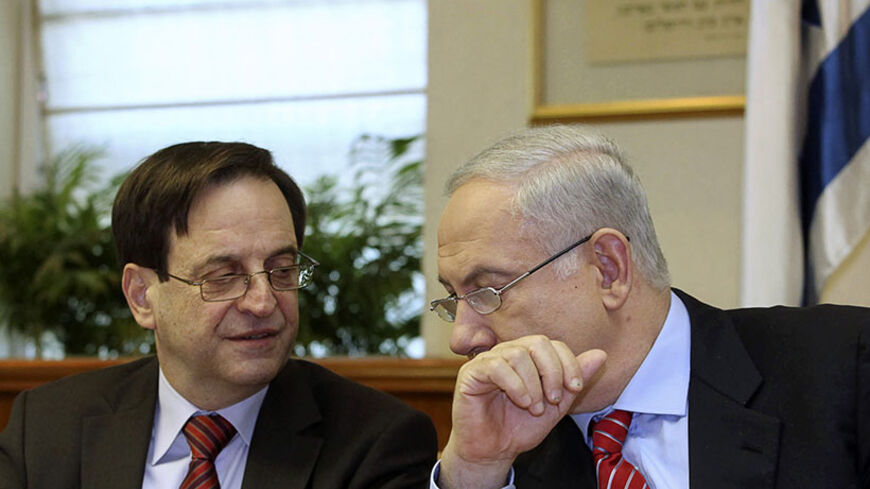 “It will take some time before we know if we restored peace to the south and if we restored our power of deterrence. It will be a few weeks or months or even years before we know if this objective was achieved,” said Dan Meridor, former minister of intelligence and a member of the “Octet,” a group of senior ministers during Prime Minister Benjamin Netanyahu’s second term. He was commenting on the end of Operation Protective Edge and the ensuing cease-fire agreement.

In an interview with Al-Monitor on Aug. 27, he called on Netanyahu to complement the military achievement with an Israeli diplomatic initiative, which he said would prevent the situation from escalating into another military conflict in the region. Is Netanyahu interested in that, or is he even capable of starting such an initiative? Meridor, who was shunted out of the Likud’s Knesset list when the party lurched to the right in the past election, has no answer to that question. He is convinced, though, that if Netanyahu takes that route, he will receive the backing of 70% of the Israeli public.

Al-Monitor:  You know Netanyahu intimately. You were a minister in his governments. How would you rate his handling of the operation in Gaza? Is public dissatisfaction with his performance justified?

Meridor:  Netanyahu made one big decision, which I think was correct, and which set the entire framework for this conflict. He set an objective that could be achieved: restoring quiet to the towns and villages in the south and restoring our power of deterrence. After all, he didn’t want this conflict, and was dragged into a war he didn’t want to fight. When there was no more choice, he entered the fray and set an objective, which is no trivial matter, since there is always a gap between what the public wants and what is actually possible.

I’m not saying that the IDF [Israel Defense Forces] isn’t a strong army, but as powerful as it is, it cannot do everything. The United States is even stronger than Israel, but it was still attacked by al-Qaeda in 2001 and it dealt with that by occupying two countries, Iraq and Afghanistan. What was its exit from Iraq like? Did it defeat al-Qaeda? Can anyone say it did? Modern warfare is asymmetrical. I think that Bibi [Netanyahu] reached the conclusion that while it is possible to occupy all of Gaza, it would come at a very steep price. What would he do with Gaza anyway? Would he continue to rule over 1.8 million Palestinians?

Meridor:  It will take some time before we know if we’ve achieved that objective. Right now, it is impossible to tell. It will be a few weeks or months or even years before we can determine whether the objective was achieved.

As far as a military achievement is concerned, we have to assess what Hamas really wanted from this conflict and what it actually got. Hamas wanted to extend their fishing zone, to release prisoners and to get a port. It wanted to strike out at us and kill us. It fired 4,500 rockets. Each rocket should have killed a few people. Hamas wanted to use the tunnels to kill civilians. It failed to activate its naval commandos. While it is true that standing up to Israel is an achievement in itself for Hamas, it was unable to achieve what it really wanted.

Meanwhile, I think that it is incumbent upon us to take action in the diplomatic arena. There are enormous shifts underway in the Middle East and in the Arab world in general, with the shattering of the frameworks of the state, the rise of religion as a major factor and the new alliances against IS [Islamic State] and Hamas. I think that all of this constitutes an enormous revolution. We saw evidence of that during the Gaza campaign, when no one stepped forward to help Hamas.

Will Netanyahu know how to leverage a diplomatic move after this past war? If he will, then it will turn the military action into a successful move. If not, and if the status quo persists, it will blow up in our faces yet again. We can’t keep the current situation as it is now. We are on a bad track. We have to correct that.

Al-Monitor:  Right now it seems as if the possibility of an agreement with the Palestinians is only getting more remote.

Meridor:  Perhaps it is impossible to reach an agreement with the Palestinians now. If that is the case, we have to reassess the situation, decide on our borders independently and act. First of all, we have to implement a total freeze on construction in those settlements that are not part of the main settlement blocs. No one in the entire world understands our policy regarding the settlements, because if Israel allows settlements to be built throughout the entire area, which is what we are doing now, how can we talk about a Palestinian state? We’re being disingenuous. We should not withdraw the army, because we saw what happened in Gaza after the army withdrew from there without an arrangement. Using that, I would create an enormous leverage for the military achievement against Hamas.

Al-Monitor:  After all these years that Netanyahu has been prime minister, do you still believe that he is interested in a diplomatic track, which will culminate in a two-state solution?

Meridor:  The indicator for this must be whether he starts to take action, and whether he stops construction in settlements beyond the separation fence. Netanyahu had two opportunities, which he should have exploited but didn’t. The first was when [Palestinian President] Mahmoud Abbas was in Saudi Arabia. He spoke out very sharply against Hamas and in support of peace with Israel. He spoke in Arabic to his natural audience. If I were Bibi, I would have told him, “Look, Mr. Abbas. We’ve had our arguments, but you said some very bold things, so I call on you to come back to the negotiations.” I would leverage his words. If they were true, then we could reach an agreement, and if not, at least we can challenge him. The second time was at the beginning of the war, when we were in a position in which it was Israel and the Arab League against Hamas. Given the Arab League’s bold statements, I would have called on it to back an Israeli-Egyptian-PLO understanding against Hamas and entered into negotiations with them.

Al-Monitor:  Even if Netanyahu wants to make a diplomatic effort, he is being prevented from doing this by the right wing of his coalition in both the government and his Cabinet.

Meridor:  The question is whether Netanyahu is convinced as I am that such a move is really vital for Israel. I don’t know. He spoke about a Palestinian state in his Bar Ilan speech. Is he prepared to start working toward this without a full agreement? And even if he is prepared to do that, is he capable politically? I think that the Likud Party has undergone a very big change. In the last elections, the liberal wing of the party — [former Ministers] Benny Begin, Michael Eitan, and I — was sent home. Netanyahu became the supposed left flank of the party.

I think that if a leader is convinced by a certain course of action, he must act accordingly. If Netanyahu would do that, 70% of the population would be with him. He has to take the risk. If the Likud stands in his way, I don’t know what he’ll do.