The Israeli left and center is not sure how to react to Prime Minister Benjamin Netanyahu's diplomatic achievements in the Gulf. 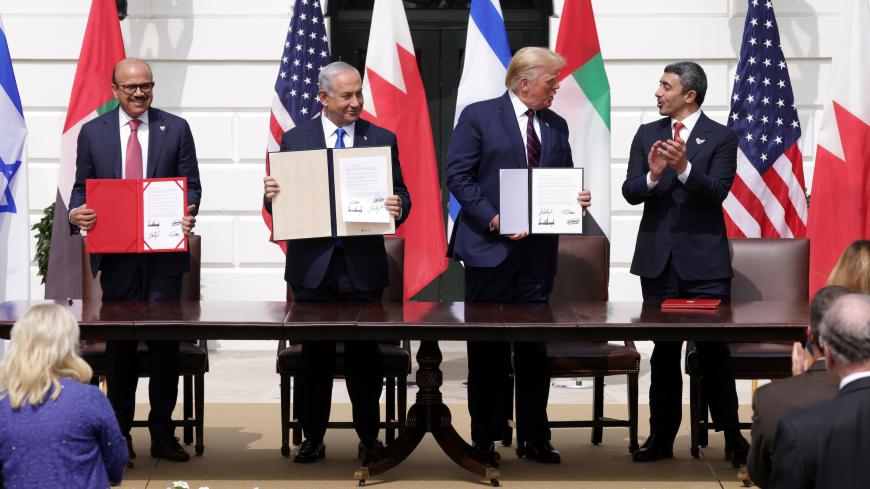 Most Israelis had never seen the two elegant gents standing alongside their prime minister, Benjamin Netanyahu, on the balcony overlooking the White House lawn on Sept. 15.

The foreign ministers of the United Arab Emirates and Bahrain, Sheikh Abdullah bin Zayed Al Nahyan and Abdullatif bin Rashid Al-Zayani, signed their countries’ historic normalization agreements with Israel’s prime minister in the surprising mid-August breakthrough with the Gulf states. Even the senior members of Israel’s ministerial security cabinet were not in on the secret of the accelerated peace process and its outcome, and the players involved on the Arab side.

The three Arab leaders with whom Israeli leaders signed peace agreements in the past — Prime Minister Menachem Begin with President Anwar Sadat of Egypt and Prime Minister Yitzhak Rabin with PLO leader Yasser Arafat and Jordan’s King Hussein — were familiar figures in Israel. The public was also aware, to some extent, of the process that led to the agreements' signing.

But this week’s signings with the Gulf states were different — they were the culmination of lengthy, clandestine processes that had finally matured and were suddenly unveiled with all the skill of a magician.

Israel is now making peace with countries with which it was never at war, with which it does not have borders nor disputes over land or national aspirations. Israelis are therefore having a hard time understanding and digesting the tremendous long-term geostrategic and economic significance of these events. They are far more focused on the raging coronavirus epidemic dragging them into a three-week lockdown and the chronic political crisis plaguing their country.

One must also admit that the hatred Netanyahu generates among a large swath of the public, even as many others adore and admire him, blurs the picture of the momentous developments he has engineered.

For decades, Israelis understood the term “diplomatic process” to mean negotiations with the Palestinians. When Israelis imagined or argued about peace, what came to mind was the price Israel would have to pay in terms of territorial concessions, evacuating settlements and dividing Jerusalem. They had also taken as axiomatic the claim that Arab states would never make peace until Israel makes peace with the Palestinians.

That was the clear understanding of all Israelis and their leaders, including Netanyahu throughout his terms in power, since the early 1990s, when Rabin signed the Oslo Accords with Arafat. When Netanyahu was first elected in 1996, he inherited the agreements with the Palestinians and was committed to implementing them despite vigorously opposing them as head of the parliamentary opposition. He cannot delete from the history books the photo of his handshake with Arafat nor his signatures, under duress and heavy pressure by US President Bill Clinton, on the Hebron Protocol and the Wye River Memorandum with the PLO.

When Netanyahu returned to power in 2009, he knew that his predecessor Ehud Olmert had promised Palestinian President Mahmoud Abbas a far-reaching proposal that included ceding sovereignty over the Temple Mount, the Jerusalem site sacred to both Muslims and Jews. Netanyahu therefore changed direction toward blocking Iran’s nuclear ambitions. The resident of the White House, however, had other plans.

A decade on, it transpires that the battle against Iran’s nuclear program and President Barack Obama’s conciliatory attitude toward Tehran sowed the seeds for today’s new Middle East. The pragmatic Arab states, fearing the Iranians on their doorstep and feeling abandoned by the United States, saw Israel as an ally — an opportunity Netanyahu identified and seized.

Relations with these states developed slowly, until US President Donald Trump came to power and turned the situation on its head. His decision to pull the United States out of the nuclear agreement with Iran and beef up sanctions on Tehran, along with his strong communality of interests with Netanyahu nourished by their personal chemistry, created a perfect storm.

The dam that has now been broken is significant for domestic Israeli politics as well. The political left and center have been caught at a disadvantage. After holding a decades-long monopoly on peace, a despised right-wing leader under criminal indictment has broken through to much of the Arab world. The confusion and embarrassment on the Israeli left will supply fodder for historians.

Left-wing politicians and voters are pulling long faces and displaying contempt for the agreements, calling them a peace of the rich and pointing out that Israel had previously enjoyed ties with the Gulf states, albeit quietly. The former leader of the Meretz Party, Zehava Gal-On, expressed this attitude succinctly when she called the agreements “fake peace,” arguing that Israel did not have any dispute with the Emirates to begin with, that it was not an enemy state and shared no border with Israel.

This sad state of affairs expresses the short-sightedness of an important political camp in failing to understand the evolution in the Middle East and the shifting interests since the Arab Spring. The delinking of peace with the Palestinians from peace with the Arab world will be the legacy of Israel’s longest serving prime minister. The Middle East is undergoing accelerated change and a new alliance among Israel, pragmatic Arab states and the United States.

The coronavirus crisis and domestic political fighting in Israel are masking the drama that will shape the region for years to come. Israel was the one that signed these peace agreements, not Netanyahu, as senior Arab affairs analyst Ehud Yaari explained in castigating many of his colleagues, including at Channel 12 where he works, who belittle the achievement. “I am sick and tired of the people who complain about Netanyahu, often rightly so, failing to see things for what they are. …The taboo that an Arab state that does not border Israel cannot make peace with Israel without permission from Abbas has been broken,” Yaari said.

Zvi Barel, Haaretz' Arab affairs analyst, made a similar point. “The political left seems to be treating the White House signing ceremony as its Pearl Harbor,” he wrote. Barel, too, views the shattering of the paradigm as a positive development that improves prospects of agreement with the Palestinians, slim though they may be.

In the post-Abbas era, once the Palestinians realize the extent of the change, they too will have to do some serious soul-searching and recalibrate their course.