Israelis captive of 'no partner for peace' concept

Palestinian President Mahmoud Abbas is willing to meet directly with Israeli Prime Minister Benjamin Netanyahu for peace talks, but the Israeli leader keeps turning his back on him. 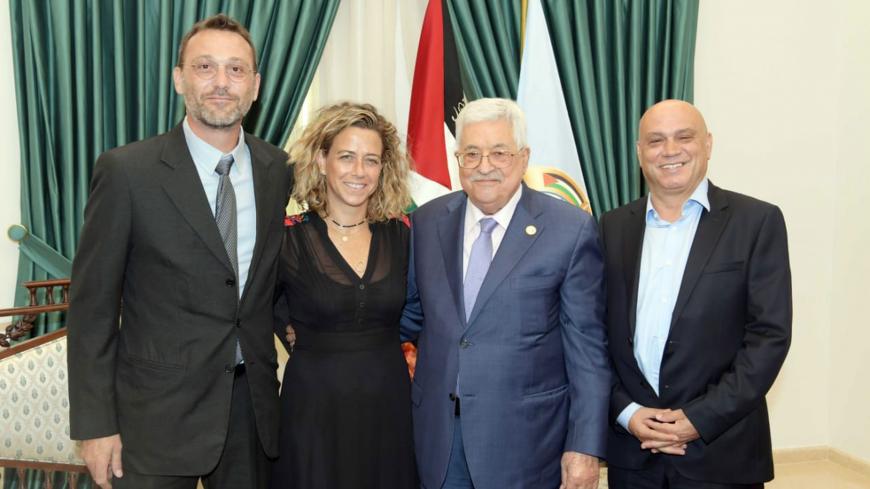 Palestinian President Mahmoud Abbas met Aug. 12 at his headquarters in the West Bank city of Ramallah with two members of the Democratic Camp party — Knesset member Issawi Freij and the granddaughter of slain Prime Minister Yitzhak Rabin, Noa Rothman. The two, who were personally instrumental in the merger of the left-wing Meretz party with the Democratic Israel party of former Prime Minister Ehud Barak, asked for the meeting to highlight their new party’s unique ideological foundations, eschewed by all other Jewish Israeli parties, striving for an agreement with the Palestinians.

Other center-left and centrist parties, such as Labor and Blue and White, had pushed aside issues of peace and the diplomatic horizon ahead of the April 9 elections, and are doing so in the run-up to the Sept. 17 voting as well. Were it not for Freij and Rothman, the hope for peace, the Israeli-Palestinian conflict and two-state solution probably would not have made it onto the campaign agenda at all. The only plans that exhausted Israeli voters are hearing about day in, day out are for Israel’s annexation of the West Bank.

“We came to the Muqata [Palestinian Authority’s headquarters] to remind Israelis that there is hope and there is a partner for peace,” Freij told Al-Monitor. Abbas told his Israeli guests that he had tried to schedule a meeting with Prime Minister Benjamin Netanyahu four times over the past two years, but Netanyahu avoided him at every turn. Abbas also told Freij and Rothman that in December 2018, he was supposed to meet with Netanyahu in Moscow, but the prime minister canceled the meeting two hours ahead of time, claiming he was stuck in Brussels.

According to Freij, Abbas had a message for Netanyahu and for the Israeli public, saying they should “put aside the Trump plan and other plans; let us talk directly and make peace as courageous leaders.” Netanyahu seized on another comment by the Palestinian leader to lash out at him. “I hope that after the elections in Israel, the new government that is formed will agree to speak with us,” Abbas told members of the Democratic Camp. Israeli media reports made it sound as though Abbas said he hoped Netanyahu would lose the elections. Citing the erroneous headline, Netanyahu tweeted, “If anyone needed another reason to vote Likud …”

Netanyahu did not care what Abbas had really said. Over the past decade, not only has he turned Abbas into a non-partner, but also into a foe who must be isolated and condemned. Netanyahu has never mentioned publicly the successful security coordination between Israeli and Palestinian agencies, the regular meetings by Israeli security agency heads with Abbas while he himself does everything he can to avoid meeting him. This way, he does not have to explain to Israelis why there is no peace process, why the two-state solution is no longer on Israel’s public agenda and why annexation of West Bank territories has become the favorite option espoused by the right-wing government he heads.

Netanyahu is not alone. The person responsible for the enduring “no Palestinian partner” campaign was none other than Ehud Barak during his term as prime minister in 2000. At the time, after the Camp David summit, Barak said the much-quoted phrase, "There is apparently no partner for peace." The responsibility for the collapse of the Israeli left and for the “no partner” perception ingrained in Israeli minds is down to Barak.

Barak, who recently apologized to Israel’s Arab citizens for the police response to rioting in 2000 in which 13 Arabs were killed, is having to fix yet another failure of his career — the "no partner" narrative — and that is what Freij and Rothman set out to do. Having initiated Barak’s apology to Israel’s Arab minority in the hopes of drawing Arab votes to the Democratic Camp, they sought to repair the tremendous damage Barak caused the Israeli left, which has been unable to bounce back since.

“Barak knew we were going to meet with Abbas,” Freij noted. Indeed, Barak did not have to explicitly greenlight the meeting; with his sharply honed senses, he surely knew the Israeli left — which comprises the majority of his potential voters — had not forgiven his “no partner” claim.

At the time, 19 years ago, Barak sought to limit the political damage to himself and his Labor party after the failure of the Camp David summit with PLO leader Yasser Arafat. To explain it to the public, Barak minted the “no partner” expression, saying, in other words, there are no prospects for peace — trying is a waste of time. Soon after, the second intifada broke out. The 1993 Oslo Accord, which Barak had hoped to revive after defeating Netanyahu in the 1999 elections, collapsed. Even when he served as minister of defense (2009-2013) in the Netanyahu government, Barak did not regard Abbas a negotiating partner and did not meet with him or praise him for the close security coordination with Israel, which has saved countless Israeli lives. After all, if there is no partner with whom to make peace, how can there be a partner for cooperation with Israeli security forces?

Freij still believes the peace process can be salvaged. He believes the Democratic Camp should be the one flying the flag of peace, “because no other party is willing to say so, courageously, and there is no other way except a two-state for two people solution. That is the only way to undermine the annexation that the right plans to carry out with Netanyahu after the elections.”

Almost two decades have gone by since Barak’s “no partner” pronouncement. The Palestinians have split into two groups — Hamas has grown stronger and taken control of the Gaza Strip, and Abbas has grown correspondingly weaker. Netanyahu continues to demonize him at every opportunity, while US President Donald Trump keeps mercilessly bashing the Palestinians on a regular basis. One meeting is therefore insufficient to jump-start the peace process. Too many obstacles have been placed over the past 20 years on the road to peace, and the Democratic Camp is not strong enough to remove them with one election campaign — even if Barak were to apologize for his hasty saying in the summer of 2000. The “no partner” claim has become fact because Israel has made Abbas a pariah.

Barak used to describe the peace process with the Palestinians as a high-speed train that left the station but never reached its destination. He himself was one of the navigators who directed it to places unknown, leaving no traces behind. Abbas is the only one still on board, but his strength is waning. Passengers have disembarked at every possible stop on the way. That is why his meeting with Freij and Rothman, while welcome, was pointless. It was merely prompted by electoral considerations.