Behind the scenes: The birth of the Meretz–Barak alliance

In an exclusive interview with Al-Monitor, Meretz Knesset member Issawi Freij, architect of the surprising agreement to merge the electoral lists of Meretz and Ehud Barak's Democratic Israel for the upcoming elections, explains what happened behind the scenes and plans for the future. 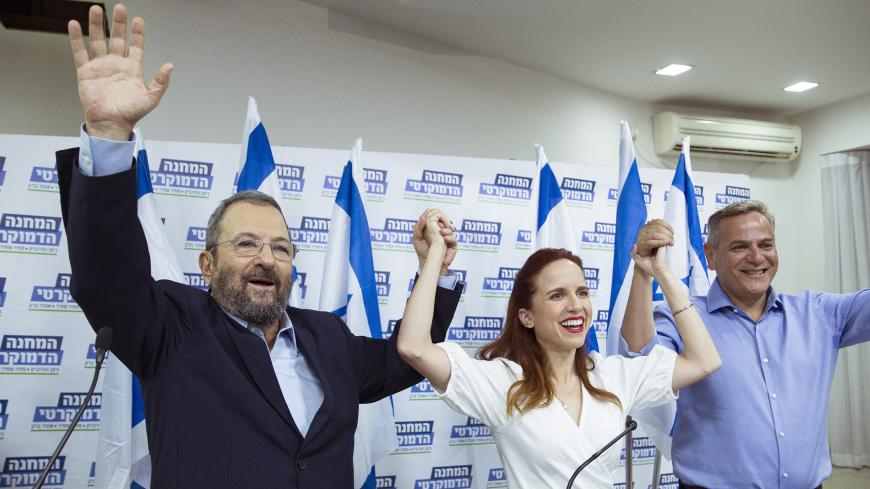 Many people were surprised by the merger of Meretz with Ehud Barak’s Democratic Israel going into September elections when it was first reported on the morning of July 25. Few people knew about the secret talks that led to the parties agreeing to form an electoral list alliance. One person who knew nothing about them was Meretz chair Nitzan Horowitz. He only learned of the negotiations after they were over, when he was presented with a memorandum of understanding ready for him to sign.

In an exclusive interview with Al-Monitor, the architect of the agreement, Meretz Knesset member Issawi Freij, offered a detailed account of the behind-the-scenes events that led to the surprising merger and revealed that former Meretz leader Zahava Gal-On had been consulted during them. The interview, conducted just hours after the alliance was announced, offers a rare glimpse into how the most dramatic move in the current election campaign came to pass.

“I was on ‘Meet the Press’ on Channel 12 last Saturday [June 20],” Freij began. “Sitting on the panel with me were Knesset member Stav Shaffir [who left the Labor Party and will hold the number two spot on the United List] and Noa Rothman, granddaughter of [the late Prime Minister] Yitzhak Rabin, who joined Barak’s party. Ben Caspit [who co-conducted the interview] asked me, ‘What do you want from Barak?’ I told him that there was a deep crisis of trust between Arab society and Barak and that he had to apologize to the Arab public [for the events of October 2000, when Israel Police and Border Police shot and killed 12 Arab citizens and a Palestinian resident of the West Bank during protests in solidarity with the Palestinians at the start of the second intifada]. I also said that I want to hear what he thinks about the Nationality Law.”

As Freij describes it, as soon as the show was over, Rothman, whom he does not know personally, asked to speak to him. He explained, “She told me, ‘We need to merge our parties,’ and I answered, ‘Noa, you just heard what I said.’ I had challenged Barak to take a major step forward. Noa called me the next day and said that Barak is willing to do anything and that he wants to talk to me. I told her that I cannot meet with Barak until he shows greater openness to Arab society. I wanted to set up an obstacle. I didn’t think he would come, but I got the hint and understood that he would be willing to apologize. I didn’t know how far he would go. The truth is that deep inside, I didn’t want Barak to agree.”

According to Freij, he himself had actually initiated the formation of a large, Jewish-Arab bloc to include the Arab parties, but that effort had failed. He remarked, “I approached Knesset member Ahmad Tibi [head of Ta’al] and told him that this is a historic opportunity. I proposed that he be the joint chair of the party, together with [former Meretz chair] Tamar Zandberg, and that we form a joint Jewish-Arab party that would be a big hit. Tibi replied that this is absolutely necessary right now, but that he could not be the only one to join, so he suggested that I speak with Ayman Odeh [head of Hadash]. I went to Ayman and offered him the chance to be the joint party chair too. He said that he agrees with me, but that he would not be able to get the decision past the Hadash party’s official institutions. At that point, I told him and Tibi that they are both cowards.”

The talks with Tibi and Odeh got Frej thinking about other possible alliances. Barak’s indication that he was prepared to apologize played a role. Freij stated, “I wrote an editorial for the Haaretz newspaper [July 23], in which I said that Barak has to apologize for his part in the killing of Arab citizens [while he was prime minister]. The article was intended to make it difficult for Barak and to clear up matters. Then Noa Rothman called me. When she asked me why I did it, and why I was making it so hard, [and] how could Barak possibly apologize now, I told her that I didn't expect him to.”

Then Barak caught Freij and everyone else off guard by going on Reshet Bet radio and apologizing for what happened under his watch in October 2000. “The man surprised me,” said Freij. “He suddenly went for it. My goal in writing that article was to put up obstacles. How can someone who was prime minister and chief of staff tell an Arab, ‘I’m sorry’? I didn’t believe he would apologize. Once he did, Noa called me and said, ‘He did it,’ and that Barak wants to meet with me. I told her that I can now speak to him. She connected us by phone, and we set up [an appointment to meet] that very night. We sat together for two whole nights, each time until morning, to discuss how to do this.”

Freij said that he didn’t inform anyone about the talks, explaining, “I brought Nitzan Horowitz a ready-made agreement and told him, ‘Sign here.’ He couldn’t believe it, but he signed.”

According to Freij, the groundwork has now been laid for stage two. He has already sent emissaries to Labor Party Chair Amir Peretz in an effort to persuade him to bring Labor along and join in a big bloc of parties that would include Barak's. “Tzipi Livni [former minister and Hatnua chair] already agreed to join the bloc if Peretz is on board,” Freij said. “She said explicitly that if Amir comes, she’ll come too.”

I asked Freij if he thinks Peretz would agree to take the number two slot on such a list. “Look, my friend, this is not the time for all sorts of calculations about seats,” Freij said. “I am giving up my seat to become a [marketer], a person on the ground, appealing to Arab society. The only thing that matters is that this move succeeds. Barak showed leadership. He buried his ego and said that he would be willing to appear in the number 10 slot on the list. That surprised me. What Amir has to understand is where he is going. We have a worthy objective, which is to replace the current government.”

Freij said that he suspects he will have a lot of work ahead of him to get Arab society to agree to reconcile after the low point of October 2000. “Arab society is faced with a difficult hurdle,” he explained. “Ehud Barak is a national icon and leader who harmed citizens of the state. He’s not like some chief of staff who fought a war in the Gaza Strip. This is different. Barak hurt citizens of the state, but now he has shifted this obstacle a little bit. I want to move it a little bit more. I have a few ideas for trust-building exercises, such as a vote-sharing agreement with the Arab Joint List and visits to the families [that lost loved ones]. I sent messengers to every single family, and it will happen. I want to advance a process of reconciliation between Arab society and Jewish society.”

Freij is now trying to convince all parties to sign a vote-sharing agreement with the Joint List. He believes that this is the only way for Jewish society to attain full reconciliation with Arab society.