Apology of Barak to Israeli Arabs: Political but important

Israeli Arabs are well aware that the apology of former Prime Minister Ehud Barak was politically motivated, but they welcome his action nonetheless. 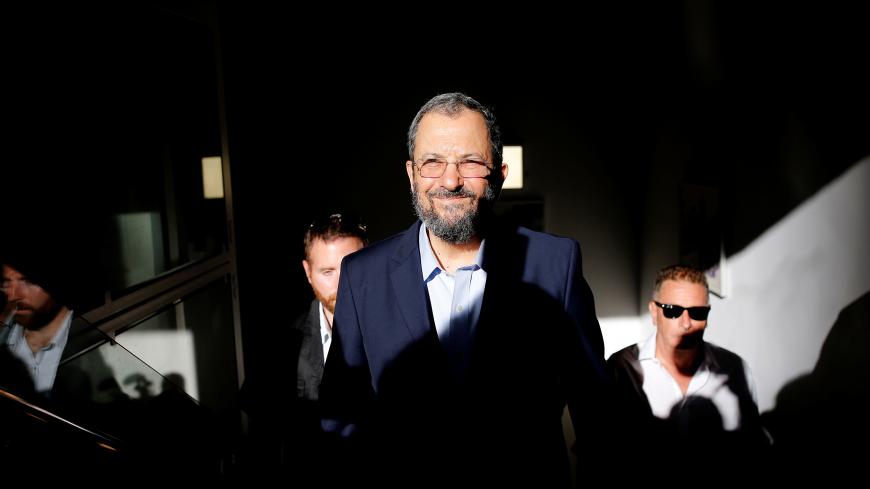 An apology to Israel’s Arab population and the No. 10 position on a Knesset coalition list for former Prime Minister Ehud Barak was the Meretz party's price for agreeing to a proposed merger with Barak’s Democratic Israel party.

Barak has experience with apologies of this kind. Everyone remembers his 1997 apology to the Jewish Mizrahi community over the Labor party’s attitude toward the group in the early years of statehood. Now he has concluded that if he really wants to be relevant in the September election, he has no choice but to apologize for the events of October 2000, and that this apology should be directed at the Arab citizens of Israel in general and the victims of those events in particular. In these events, 12 Israeli Arabs and one non-Israeli Palestinian were killed by police during demonstrations that followed the ascension of then-Likud head Ariel Sharon to the Temple Mount. Barak was then prime minister.

The trigger for his apology came in the form of a July 23 editorial in Haaretz by Knesset member Issawi Freij of Meretz. In a piece titled “Things that Barak Needs to Say,” Freij called on Barak to apologize for the deaths of 12 Arab citizens of Israel, who were shot to death by the police. “As an Arab citizen of Israel, this is what I would want to hear from Ehud Barak,” Freij wrote. “The events of October 2000 happened under my watch. During my tenure as prime minister, 12 Arab citizens of Israel were shot dead by the Israeli police. As the person who stood at the head of the entire system, the responsibility is mine, first and foremost, even if I did not pull the trigger personally.”

What is strange is that in a radio interview just two weeks earlier, Freij called Barak a “dangerous and divisive honeytrap. As an Arab, I cannot forgive him for the events of October 2000. Don’t apologize to us. Stay seated in your luxury towers and don’t interfere.”

So what actually happened here? It seems as if Freij and his colleagues in left-wing Meretz realized how they were teetering on the electoral threshold and concluded that they had no choice but to join forces with Barak. The demand for an apology, as described in Freij’s article, seems to have been intended to allay the feeling of antagonism that so many Israeli Arabs have for the very name “Ehud Barak.”

It is quite possible that Barak will now serve as a “lifesaver” for the four Arab parties who made up the Joint Arab List. In other words, his decision to join Meretz may goad them into overcoming the “ideological” debate over who will appear in the 12th and 13th spots on their list and encourage them to run together, if only to prevent Barak from getting elected. It is a safe bet that some of the Arab Knesset members and their supporters will have no qualms about throwing the name Barak around to show an excess of Arab patriotism.

What caused Barak to apologize? It’s really very simple. He saw that his latest initiative, Democratic Israel, was going nowhere in the polls. Since Amir Peretz of the Labor Party shut the door on Barak by refusing a merger, the former prime minister needed to join forces with Meretz, no matter what it cost, if he were to pass the electoral threshold. It is also why he agreed to take the No. 10 slot on the list. After all, it should not be taken for granted that a former prime minister and defense minister would even accept that position. On the other hand, anyone who has listened to Barak over the last few months realizes that at age 77, he has no plans to be just another, random member of the Knesset, participating in the various committees and proposing legislation. His position on the list is not critical for him. He has one goal and one goal only. He wants to replace the current government and send Netanyahu home. It doesn’t matter if he does it from the No. 3 slot, the No. 7 slot or the No. 10 slot. All that matters is that it happens.

And yet, there is still a question to be asked. What is the real value of his apology? Will it cause the Arab public to wake up from its state of apathy and finally show some civic responsibility by showing up at the voting booth? As of now, apparently not! Netanyahu has no reason to panic, at least in this regard. The reason for this is the failure by non-Arab parties to include Arab men and women in their lists. The way it looks now, these parties consider Israel’s Arab citizens to be little more than contractors brought on board to get votes for the parties or even to be social activists. On the other hand, the parties do not see Israeli Arabs as suitable candidates for their Knesset lists. The parties want Arab votes just to bring their own people into the Knesset. It is the same thing that Moshe Ya’alon and others are doing by their spate of tweets about sudden visits to Arab towns and villages. Even the joint Meretz-Barak list has not, at least until the time of this writing, included an Arab candidate apart from Freij.

The apology is very important for Meretz to ensure that it does not lose its Arab voters. Meretz members know that they survived the April election because of the Arab vote. Barak’s apology could be the candy they need to sweeten the deal for Arab voters and alleviate their opposition to Barak. It is important to remember that many Arab citizens who voted for Meretz are people looking for an Arab-Jewish partnership in a new political home, because that is one thing they do not find, either in the Arab parties or in the parties that ignore them such as Blue and White.

But let there be no mistake. It is safe to assume that Barak would not have apologized now had it not been the eve of a new election. This was a political apology, just like his apology to the Mizrahi community. Nevertheless, as an Arab citizen of Israel, I still maintain that this was a very important apology. Obviously, it will not give back the 13 people who were killed. No apology or expression of regret will suffice for the families of these dead or of Arab citizens in general, who feel that the heavy hand of the police can suddenly get trigger happy when they have Arab demonstrators in their sights. I don’t know a single Arab citizen of Israel who is able to forgive what happened in October 2000. Parents will not forget their loved ones, nor will they forgive whoever shot them dead. Remarks made by Hassan Asleh, father of Asil Asleh, a graduate of the Seeds of Peace camp for peace and coexistence, are chilling. He told radio host Razi Barkai on July 24, “It would have been good if he [Barak] would stand there surrounded by our community and shoot himself in the head, or at the very least, let one of my brothers, the martyrs, do it for him. I’m not calling for his murder, but if he admits to committing the crime, he should be made to pay for it.”

Nevertheless, despite all the anguish and pain, a public apology by the former prime minister for the events of October 2000 does have symbolic significance, even if it was motivated by politics.