Former Prime Minister Ehud Barak apologized for the killing of 12 Arab citizens in the 2000 protests — a step apparently designed to score some political points ahead of the September elections. 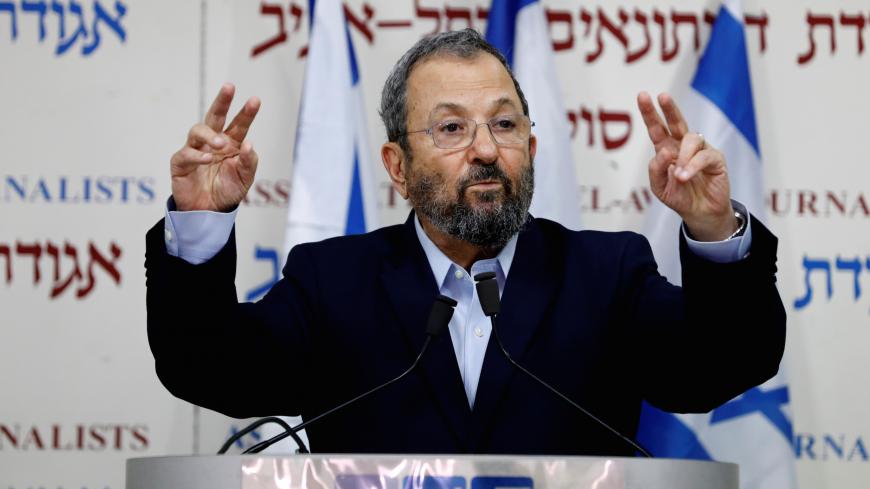 In 1997, former Prime Minister Ehud Barak delivered a public apology to Israel’s Sephardim for the poor treatment they received at the hands of the Labor party in the early decades of the State of Israel. And now, 20 years later, Barak apologized and took responsibility for the events of October 2000, in an interview with Kan Bet on July 23. That was when the Israel Police shot and killed 12 Arab citizens (and a non-Israeli Palestinian) during riots that erupted when then-Likud leader Ariel Sharon ascended the Temple Mount, leading to the onset of the second intifada.

This time, as well, Barak apologized on the eve of elections with the goal of removing barriers and “making friends” with the populaces needed to defeat Prime Minister Benjamin Netanyahu. Last time, Barak apologized in his name and the name of the Labor party, which he headed. Now, he apologizes in his own name alone. This time, he’s not the one who’s supposed to depose Netanyahu. There are other candidates for that task, former chief of staffs like him. This time, the only thing he’s trying to do is enable his new party (the Israel Democratic Party) to merge with Meretz, to cross the electoral threshold on Sept. 17 and avert a critical loss of mandates that might allow Netanyahu to survive.

“I really bear responsibility for everything that took place during my tenure as prime minister, including the events of October [2000],” Barak said. “I do not absolve myself of responsibility. It is forbidden for such things to happen.”

We are 55 days from the elections, which are (again) labeled as fateful for the future of Israel. We are also about a week from the closing of the lists on Aug. 1. Israel’s political map is undergoing an accelerated evolution. Both right and left are making desperate, against-the-clock attempts to unite as many small parties as possible with the goal of averting what happened to the right in the last elections: Small parties did not cross the electoral threshold, leading to a critical loss of votes.

This time, both right and left realize that a repeat of such a process would be a mass catastrophe. Any of these camps losing one small party beyond the electoral threshold will, almost certainly, reduce their chance of success. This time, both right and left know that there won’t be do-overs; Israel won’t go to elections for the third time in a row. In short: If Netanyahu doesn’t bring 61 mandates (a majority coalition) without Yisrael Beitenu leader Avigdor Liberman (Netanyahu’s nemesis), his political career is over. If Blue and White doesn't succeed in posing a real alternative to the Likud ruling party and assembling a coalition government, then Benny Gantz will also approach the end of his historic role.

The three significant players on the field are Labor’s Amir Peretz, New Right’s Ayelet Shaked and Ehud Barak, but not in this order. Peretz jumped ship at a critical moment and announced he is not interested in uniting with Barak or Meretz. Peretz united with former Knesset member Orly Levy-Abekasis, who failed to enter the Knesset in the April elections. Peretz is setting his sights on the right. He is using all his strength to win over Likud members and people living in the country’s periphery. Peretz is optimistic, but this same optimism could erase the Labor party from the political map. One way or the other, Peretz has situated himself to the right of Blue and White and abandoned Labor’s historic position on the left.

The two others, Shaked and Barak, are working in parallel toward large mergers on the right and the left. Shaked precedes Barak by a significant margin (in efforts to merge parties within her camp), and her chances of success are higher: She already assumed leadership of the New Right (which mostly appeals to a moderate secular electorate), instead of Naftali Bennett, who accepted the change graciously. Now she wants to merge with the more extremist United Right list, including its leader Rabbi Rafi Peretz and senior member Bezalel Smotrich (each heading a separate faction within the list), with herself in the No. 1 position. The polls show that she is popular and will bring more mandates than Rabbi Peretz. Even though she is secular, key Religious Zionist rabbis back her. As of now, chances are good that the right (apart from the Likud) will unite to include these two factions, plus Moshe Feiglin’s Zehut party and perhaps even the extremist Jewish Power group. Netanyahu is exerting pressure to include Jewish Power, so as not to lose even a fraction of a mandate. The right’s instincts for success will probably overcome the difficulties and create unity.

On the left, things are somewhat slow and weary as usual. Barak’s comeback plan was shattered in light of the bad publicity he received regarding his connections to Jeffrey Epstein and his continued refusal to reveal what he did for the American Wexner Foundation, which apparently gave him $2.3 million in 2004. All this has turned Barak into a hot potato; no party wants him anymore. Peretz has kept his distance, and Meretz demanded clarification regarding the Epstein and Wexner Foundation imbroglios. They also asked for one small, additional favor: that Barak apologize to the Israeli Arabs for the events of October 2000.

The latter demand was voiced by Meretz Knesset member Issawi Freij, himself a son of a bereaved family due to the massacre in Kafr Qasim in 1956. Barak, who is struggling to restore his good name, did not hesitate; he delivered his public apology the very next day. Now, according to sources in Meretz, the path is open for a merger. It is not yet a sure thing, but the chances have gone up. A merger of Barak and Meretz would release the two components from the electoral threshold nightmare. While it may not raise the total number of votes, at least it averts disaster.

But that’s not all: There are elements in Meretz who want to widen the net and talk about adding some Arab parties into this future Barak-Meretz platform. The Arab parties in question are Hadash, Ayman Odeh’s party, which leads the Arab Joint List, and perhaps an additional party or parties from the Joint List, with the exception of the ultra-nationalistic Balad.

The person behind this initiative is Knesset member Freij, who still dreams about a Jewish-Arab party envisioned by many left-wing activists over the years. In his dreams, Freij sees his vision taking shape and becoming a significant factor in the upcoming elections. “In order for it to happen, real leaders must arise among the Arabs,” Freij told Al-Monitor. “I hope that will happen.” Unfortunately, it is doubtful that this hope will be realized.

What remains for the left is to pray for Amir Peretz’s success. Peretz had adopted the Don Quixote role and is now storming Likud strongholds, against all the odds. Even on the left, some members are beginning to internalize the realization that the time has come to shelve ego trips, pettiness and narrow-mindedness in favor of unity and victory. The left wing also realizes that there won’t be another chance. Avigdor Liberman remains on the fence, without any commitments to the right or the left.

If there won’t be a dramatic change now, a turnover probably won’t ever happen.