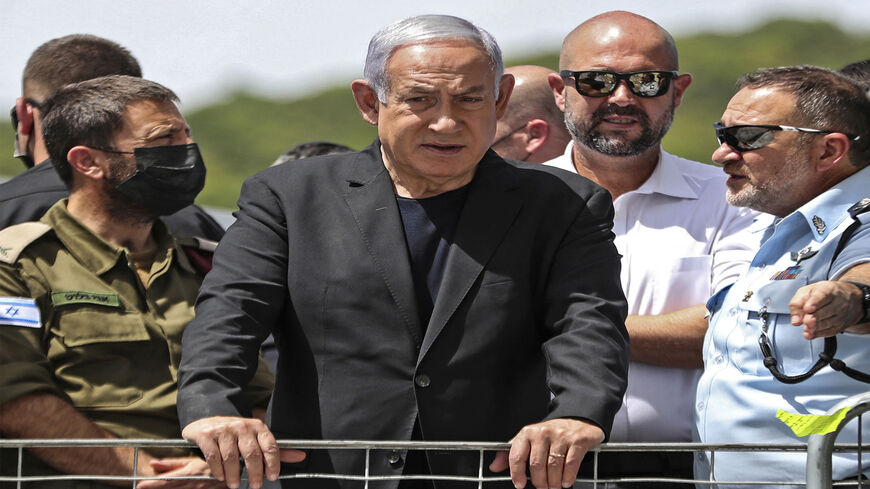 Israeli Prime Minister Benjamin Netanyahu visits the site of an overnight stampede during an ultra-Orthodox religious gathering in the northern town of Meron, Israel, April 30, 2021. - Ronen Zvulun/POOL/AFP via Getty Images

This operation was supposed to be the jewel in Israel’s crown, the result of impressive, painstaking intelligence collection mapping out the vast network of Hamas tunnels in the northern section of the Gaza Strip, including the fortified, fully equipped bomb shelter for the organization’s leadership. The Islamist group had little idea that everything it was digging underground over the years was being documented by Israeli intelligence in order to compile a bank of bombing targets for future use. Israel had also devised a series of sophisticated ruses designed to force Hamas commanders to flee underground into what the military was dubbing the “metro,” where they would be buried by heavy bombs bringing the tunnels crashing down on their heads.

On May 13-14, one of Israel’s top brass made what would turn out to be a hasty decision. The military launched its deception maneuver, which included spreading rumors of an imminent Israeli ground offensive in northern Gaza. The rumors were bolstered by the spokesperson of the Israel Defense Forces (IDF), who issued an official announcement in the pre-dawn hours of May 14 broadly hinting at such an operation. The idea was to lure all the Hamas leaders into the tunnels where they would prepare to take on the invading enemy forces, allowing Israel to bomb them all.

Hamas, however, did not fall for the ruse. Its Gaza chief Yahya Sinwar, head of its military wing Mohammed al-Deif, his deputy Marwan Issa and others did not believe the IDF would be launching a ground offensive and risk the lives of many soldiers just days after starting its relatively surgical aerial and artillery bombing campaign. Instead of hundreds of Hamas leaders, commanders and fighters rushing into the tunnels, only a few dozen hunkered down there. As of this writing, it is still unclear how many were killed, but the meticulous plan the IDF had prepared appears to have been wasted. The tunnels have caved in under the force of the depth charges, but those who ordered their digging are very much alive.

The IDF is trying to look at the “bright” side. The way IDF Chief of Staff Lt. Gen. Aviv Kochavi sees it, Israel has deprived Hamas of its strategic underground assets. Before the start of what Israel has codenamed Operation Guardian of the Walls on May 10, Hamas believed its people could find refuge when the time came in the underground city it had built at tremendous expense over the past decade. However, precision Israeli munitions demolished this safe space, based on equally precise intelligence. The Hamas underground option is no more.

While this is a strategic achievement, it is not the photo being sought by Prime Minister Benjamin Netanyahu and Defense Minister Benny Gantz encapsulating in no uncertain terms Israel’s victory over the terrorist organization. The tunnel debris is not littered with the bodies of Hamas leaders and commanders. Gaza’s famed tunnel builders will rebuild the underground fortifications in years to come, possibly trying to reenforce them in the vain hope of protecting them from the bunker-busting munitions of the Israeli air force. Either way, Israel has undoubtedly wasted its strategic plan to deal a historic knockout to Hamas simply because someone was in too much of a rush to score that elusive victory photo.

Who, then, will be crowned the winner of this current round between Israel and Gaza? Depends whom you ask and how you look at it. The IDF’s performance has undoubtedly been effective, destroying the “metro” and part of the Hamas missile-launching capacities, assassinating six top military commanders, sinking the small fleet of tiny unmanned submarines designed to explode under or near Israeli navy vessels and/or Israeli offshore oil and gas drilling rigs. The IDF has also destroyed a significant part of the Hamas missile production facilities and thwarted its ability to execute terror attacks against Israel from the sea (using its subs or navy commando units), the air (using exploding drones) or on land (Israel thwarted the infiltration of an elite Hamas unit through a tunnel shortly before it launched a raid inside Israel, killing the fighters).

Israel is buoyed by its success in depriving Hamas of another strategic weapon — its array of tunnels leading into Israel, which has been blocked by a state-of-the-art underground barrier dug along the Gaza border in recent years. Much to its frustration, Hamas finds itself deprived of most of its offensive options, left with “only” its rocket capabilities. But in the face of the impressive Iron Dome missile defense system Israel has deployed and upgraded over the past decade, intercepting the majority of Hamas rockets, the organization has responded with improved capabilities of its own. The makeshift holes it used to dig in order to position its rocket launchers in the past have been replaced with stationary and mobile batteries of multiple launchers that challenge the Iron Dome interceptors with their simultaneous firing and sheer numbers. The rockets themselves are sturdier, heavier and more precise.

Israel is now facing a relatively simple problem: Whereas it has recorded a series of tactical military achievements, Hamas has scored several historic gains, each of which constitutes a so-called victory photo. It fired six missiles at Jerusalem, Israel’s capital, cutting short a Knesset debate and sending lawmakers fleeing for cover, humiliating Israeli democracy for all the world to see. It has pitted Arab and Jewish citizens of Israel against each other, setting off days of anarchy, and it is having some success in triggering anti-Israel violence by Palestinians in the West Bank. To top it off, Hamas has taken its revenge on the cancellation of the Palestinian elections this month (that it was widely expected to win), and it has eclipsed Palestinian President Mahmoud Abbas, undermining his hold on power and crowning itself the savior of Jerusalem and Al-Aqsa Mosque, one of Islam’s holiest shrines.

An interim assessment of winners and losers would not be complete without Netanyahu and his frantic attempts at political survival. Throughout his career, Netanyahu has tried to avoid military adventures. Even when he was dragged into offensives against Gaza (Operations Pillar of Defense in 2012 and Protective Edge in 2014), he was primed to end them almost as soon as they began. However, this is the first time Netanyahu is striving to continue the operation rather than end it.

This time, clearly, the fighting serves his political goals. Operation Guardian of the Walls has already thwarted the formation of the broad-based coalition that was preparing to replace his government, it has dragged his putative successor Yamina leader Naftali Bennett back into the fold of the Netanyahu-led right, and granted the prime minister a reprieve. This is not to say that the operation was prompted by political considerations. The Hamas rockets fired at Jerusalem undoubtedly did not leave Israel any choice. What it does say is that Netanyahu of Operation Guardian of the Walls is not the one we have known, the cautious leader steering clear of military entanglements, thus greatly increasing the odds of just such an outcome.