Despite Israel's relentless bombing of Hamas' leadership and tunnels, the Islamic resistance group claims the network will survive the assault. 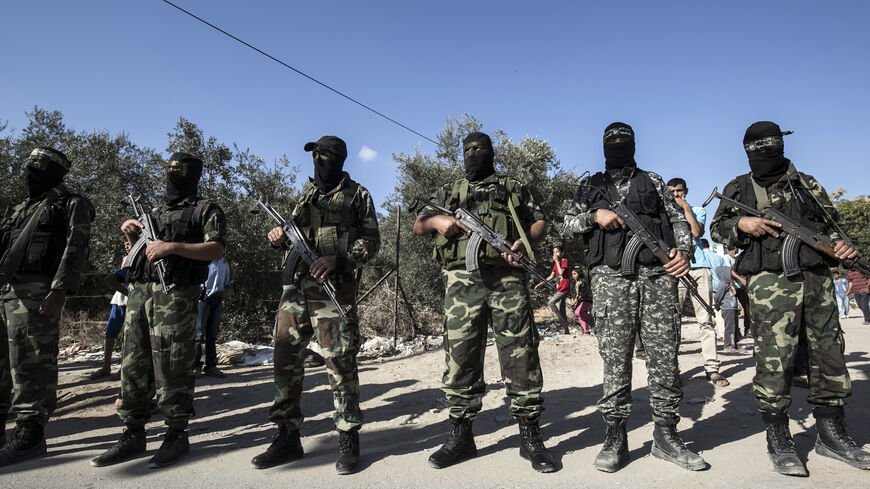 Members of the military wing of the Palestinian Islamist movement Hamas attend the funeral of fellow militant Amir Jaber Abu Taimeh in Khan Yunis in the southern Gaza Strip on Oct. 24, 2016. - SAID KHATIB/AFP via Getty Images

GAZA CITY, Gaza Strip — The Israel Defense Forces claims that Hamas has been investing most of its resources in digging tunnels under the Gaza Strip, particularly in the north. A maze of interconnected tunnels akin to a metro network was built underground across the coastal enclave, and the Israeli forces are intent on demolishing it.

At the beginning of 2021, Basil Salhieh, the former head of Hamas’ military wing the Izz ad-Din Al-Qassam Brigades, warned in video messages that Israel has a map of Gaza’s tunnels and was preparing to demolish them in the next conflict. Salhieh said that he had spoken to Hamas’ leadership about this issue, and was determined to spread his message. But his warnings were brushed aside and Al-Qassam Brigades arrested him for posting the videos.

As of the time of this writing, 197 people have been killed in the Israeli shelling, including 58 children and 34 women, since the violence broke out on May 10, according to the Ministry of Health in the Gaza Strip.

Ibrahim al-Madhoun, a political analyst close to Hamas, told Al-Monitor that the intensity of Israel’s attacks on the tunnels betray its fear that Hamas will use them to carry out surprise attacks. He explained that in the 2014 war with Israel, the tunnels are Hamas' most effective strategic asset but not its only one.

He said, “Israel has allocated billions of dollars in budgets to deal with the tunnel issue. It had built a high-tech steel wall and purchased bunker-busting bombs and American F-35 jets, which it has been currently using in an effort to destroy the tunnel network.”

Madhoun believes Israel will continue targeting the tunnels even after the current round of violence ends and invest all its resources into uncovering the underground network. He added that protect Hamas' operatives and communications network from air attacks.

“Israeli claims of this knowledge are a bluff made out of fear," Madhoun added, claiming that Israel's knowledge of the network appears limited based on the strikes in this round of fighting.

“According to my information, the tunnels that were targeted by the Israeli army were partially destroyed, but this did not stop Hamas,” he added.

He said the Israeli airstrikes did kill some Hamas operatives, including figures close to Abu Khaled al-Deif, Al-Qassam Brigades’ commander-in-chief. “The battle, however, is still directed by dozens of vital leaders Israel has been unable to locate and target,” he said.

Tayseer Mehasen, a professor of political science at Al-Azhar University in Gaza, told Al-Monitor that the violent attack on Gaza indicates that Israel is aware of how difficult Hamas is to infiltrate and defeat.

“Israel appears to have failed to strike its military targets. Therefore it is trying to pressure the resistance by targeting Palestinian civilians, which is evident in the number of civilian casualties, among them children, which account for nearly half of all of those killed," he said.

“Hamas has put the Israelis in an embarrassing position, as its missiles reached cities deep into the Israeli territories. The Islamic movement has developed its military capabilities and is now threatening Israel’s military forces and Israeli settlers. Therefore, it is very unlikely Israel will accept any truce before making a significant offensive gains,” he added.

Israel’s attacks on Gaza's infrastructure, roads and residential towers indicates that the Israeli military does not possess accurate intelligence on the locations of Hamas' operatives, “which prompts it to bomb larger areas to hit the target,” Mehasen explained.

He added that the Israeli army may indeed have a map of the tunnels and has already destroyed part of them, but “there are still dozens of tunnels that are unknown to Israel, which managed to recruit some figures with information about the resistance.”

“This explains why the Israeli military was able to kill some Hamas leaders at the beginning of the offensive. However, the escalation in violence, the relentless bombing and the Israeli army’s statements that it could not reach several Hamas leaders in the north indicate that the information it has was limited,” Mehasen explained.

“The resistance has been firing missiles reaching remote areas, which indicates that some of the tunnels are close to the border in the northern areas,” he added.

Mehasen said that Israel seeks to create chaos and disrupt life in the Gaza Strip but failed to achieve it, as Palestinians have “shown absolutely unprecedented support" for Hamas, stressing, “Gaza would want to keep escalating rather than accept unfair conditions of calm.”

He added, “In previous wars, dozens of Hamas leaders were killed in a single raid. This time, Israel has been pounding Gaza with dozens of airstrikes, decimating entire areas to be able to target one leader.”

Mehasen believes that the high cost of building the tunnels is worth their ability to protect Hamas’ operatives, stressing that Israel will not back off until its military gains that boost the government's image.