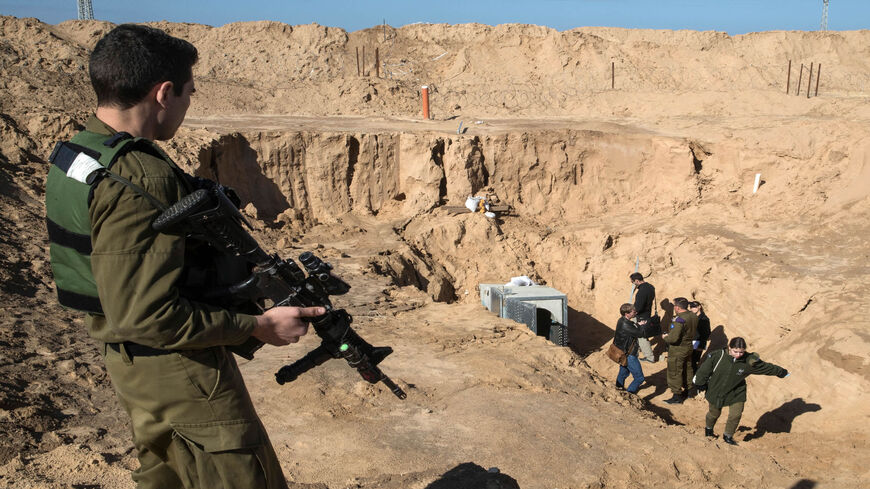 A picture taken from the Israeli side of the border with the Gaza Strip shows Israeli soldiers standing near the entrance of a tunnel that Israel says was dug by Islamic Jihad, leading from the Palestinian enclave into Israel, near the kibbutz of Kissufim, Israel, Jan. 18, 2018. - Jack Guez/AFP via Getty Images

GAZA CITY, Gaza Strip — The Israeli military operation that erupted May 10 has killed 232 Palestinians, wounded 1,900 others and destroyed 1,800 housing units and dozens of economic and commercial facilities. On May 20, Israel and Hamas agreed to a cease-fire, ending the hostilities. While Israel claimed that the strikes were targeting Hamas — in particular its tunnel network — the militant group has downplayed the damage to the underground system and Gazan officials say the bulk of the damage has been to infrastructure vital to citizens.

The largest bombing operations took place May 14 with the participation of 160 Israeli combat aircraft and dozens of heavy artillery batteries in the northern Gaza Strip. Within 35 minutes, 450 missiles were dropped on 150 targets, destroying entire neighborhoods and displacing thousands of families toward schools run by the United Nations Relief and Works Agency for Palestine Refugees in the Near East.

Hours after these bombings, Israeli army spokesman Avichai Adraee announced that the army had dealt a heavy blow to Hamas’ tunnel network in an operation dubbed Hamas Metro, destroying underground tunnels in the northern Gaza Strip and killing hundreds of fighters.

Earlier, the Israeli army allegedly tried to trick Hamas by insinuating that it would carry out a ground attack on northern Gaza in order to prompt hundreds of fighters to hide in those tunnels and subsequently launch airstrikes on the tunnels. Just after midnight local time on May 14, the Israel army put out a statement saying that "air and ground troops are currently attacking in the Gaza Strip." While a clarification was later issued stating that no troops were in Gaza, Israeli military commentators widely described it as a ruse by the army to trap Hamas leaders in tunnels. While some military commentators, such as Or Heller from Israel's Channel 13 TV, described the plot as "successful," Hamas says it discovered the Israeli plan in advance.

Yet still, the Israeli army pursued its violent bombing operations until the evening of May 20, hours before the cease-fire entered into force, as it targeted separate areas of the Gaza Strip, which it claimed were covering Hamas tunnels. Meanwhile, Israeli Minister of Defense Benny Gantz said May 20 that they are “taking Hamas on a journey back in time — a journey from which we will not allow it to return.”

An official in Izz ad-Din al-Qassam Brigades, Hamas’ armed wing, told Al-Monitor on condition of anonymity that he does not think the Israeli army managed to destroy the tunnels.

He said the Israeli army’s failure is evidenced by the fact that “we fire all our missiles at Israeli targets from underground platforms using tunnels that the army claimed it destroyed.”

Israel said that Hamas invested hundreds of millions of dollars in building these tunnels for many years and that it was able to build an entire underground city either for use in fighting the Israeli army when entering Gaza, in storing weapons and launching missiles, or in hiding fighters and Hamas military leaders from the Israeli aircraft.

Gaza City Mayor Yahya al-Sarraj told Al-Monitor that Israel has destroyed a large part of the infrastructure of Gaza City, specifically roads, water stations and electricity installations. He said that they are removing debris from roads to make it easier for ambulances and civil defense vehicles to circulate.

Sarraj explained that they did not see any tunnels or facilities belonging to the Palestinian resistance during the rubble removal and road opening operations, and claimed that Israel used the tunnel issue as a pretext to destroy the infrastructure of Gaza City and deepen the suffering of its citizens.

Hamas started digging tunnels in 2001, and these were used for the first time to blow up an Israeli army site in Rafah. Hamas subsequently used these tunnels to smuggle goods and food commodities after Israel imposed a blockade on the Gaza Strip in the wake of Hamas’ victory in the 2006 legislative elections.

After Hamas captured Israeli army soldier Gilad Shalit in 2006 from an Israeli military site to the east of Rafah in southern Gaza through a tunnel, the movement was motivated to expand its tunnel building activities in the Gaza Strip. During the 2014 war, it managed to infiltrate into Israeli army positions, as it killed a number of soldiers and captured the remains of two others.

Youssef al-Sharqawi, a Palestinian military expert and military leader in the PLO, said that destroying the tunnel network is no easy task. He told Al-Monitor that Hamas’ tunnels are located deep in the ground and are built with reinforced concrete in order to create greater protection for fighters in case they are bombed.

“Israel may have managed to destroy some Hamas tunnels, but this does not infer that it has destroyed the entire tunnel project built by Hamas. The movement has been digging many tunnels in different directions under the Gaza Strip for several years, so it is difficult for Israel to destroy them all,” he concluded.