As Israel prepares to erect underground barriers to prevent Hamas from digging tunnels, some worry that the movement will act to obstruct its construction. 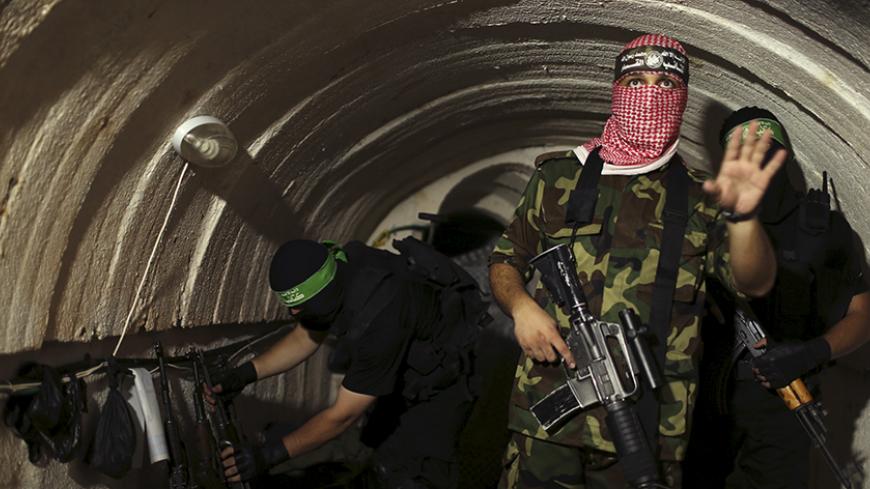 A Palestinian fighter from the Izz ad-Din al-Qassam Brigades, Hamas' armed wing, gestures inside an underground tunnel in Gaza, Aug. 18, 2014.

The Israeli state comptroller report issued Feb. 28 harshly criticized the government and military for not being prepared to confront the danger of the tunnels dug by Hamas on the eastern border of Gaza through which the movement's fighters carried out several military operations against army positions during the summer 2014 war. In response, Gen. Gadi Eizenkot, Israel Defense Forces chief of staff, told Knesset members on March 22 that the army had made numerous efforts since the 2014 Gaza war to counter Hamas' tunnels in eastern Gaza and is currently building a barrier to prevent Hamas from using the tunnels in any future military confrontation with Israel.

On April 5, Yedioth Ahronoth published pictures of a cement factory north of the Gaza Strip that will reportedly be involved in constructing the barrier. The structure will cost $1 billion; it will be 65 kilometers long and constructed in segments above ground and underground along the border in northern and eastern Gaza to be able to detect the tunnels’ location. The paper quoted an anonymous source from the Israeli Defense Ministry as saying that engineering equipment and vehicles will be operating in 40 posts in the upcoming weeks, along with 2,000 workers and large military contingents to protect them.

Hamas spokesman Fawzi Barhoum told Al-Monitor, “Hamas is closely monitoring Israel’s field efforts to thwart the movement’s military capabilities, mainly by building a barrier to prevent it from using its tunnels to defend Gaza. However, Hamas is constantly evaluating Israel’s efforts to prevent it from achieving its objectives, without entering a wide-scale war. [Hamas] evaluates each step it takes in any event.” Barhoum did not indicate whether Hamas continues to dig tunnels.

In an April 1 article in Maariv, Israeli military expert Alon Ben-David said that building a barrier could result in a new war with Hamas. According to him, Hamas will likely try to stop construction of the barrier, even at the expense of another round of military conflict. He said there are doubts about Hamas’ ability to restrain itself, watching in silence as Israel deprives it of its strategic treasures.

Wasef Erekat, a retired Palestinian military officer, told Al-Monitor, “Israel is really serious about fighting the tunnels, and as it starts to build the barrier, Hamas must publicly declare its opposition to this project and hold Israel responsible for any complications that may ensue. At the same time, Hamas fighters have begun picking fights with the Israeli forces guarding the engineering equipment, whether by sniper bullets or roadside bombs, in an attempt to keep Israel busy without provoking an open military confrontation.”

The Izz ad-Din al-Qassam Brigades, Hamas’ military wing, first began using tunnels in 2001 when Israeli forces still occupied Gaza, when it blew up an Israeli military outpost near the border between Egypt, killing five soldiers. Then, in 2003 it blew up the Hardon outpost in Rafah in southern Gaza, killing two Israeli soldiers; in 2004 it attacked the Mahfouza outpost near Khan Yunis in southern Gaza, killing seven soldiers.

Hamas also used the tunnels in the capture of the Israeli soldier Gilad Shalit near the Kerem Shalom crossing in June 2006. In 2013, it carried out an operation near Khan Yunis, killing six Israeli soldiers, followed by an attack in 2014 against the Abu Mutabik outpost in eastern Gaza, killing eight Israeli soldiers.

Hisham Maghari, security expert and dean at al-Awda University College in Gaza, told Al-Monitor, “The resistance will not be able to prevent Israel from building the barrier, which might eventually put an end to tunnel activity. The movement might have to figure out some new combat methods. This is why it would not be fruitful to even consider waging a war over the tunnels, because Israel insists on carrying on with its project until the end, regardless of any war that may erupt.”

Hamas spokesman Hazem Qassem told Al-Monitor, “No barrier along the Gazan border can give Israeli settlers and soldiers the sense of security they lost long ago. The resistance has creative and innovative means to overcome any Israeli field effort against its tunnels. There is no need to go into details.”

For his part, Imad Awad, a Palestinian expert on Israeli affairs at the Vision Center for Political Development in Istanbul, told Al-Monitor, “Hamas may carry out attacks through its tunnels before Israel discovers their location and puts an end to activities by building the barrier. It would be hard for the movement to lose years and years of the effort to build the tunnels, let alone the fighters who died while digging them.”

He also remarked, “Meanwhile, the economic situation in Gaza has been going downhill, which may accelerate a large-scale confrontation, especially since Hamas is convinced that its military performance was great in the 2014 war. However, Hamas did not use this achievement at the political level to achieve changes on the ground and lift the siege of Gaza.”

The huge financial cost of the Israeli barrier and the media coverage the project is receiving give some observers the impression that Israel is embarking on a long-term project that will definitively rid it of the tunnels, locating them one by one, destroying them and preventing Hamas from digging new ones. In the meantime, Israel will keep a close watch on Hamas, not expecting it to stand idly by and watch.