Israel’s sea and land barriers were built to stave off Hamas attacks and prevent tunnels from being dug. 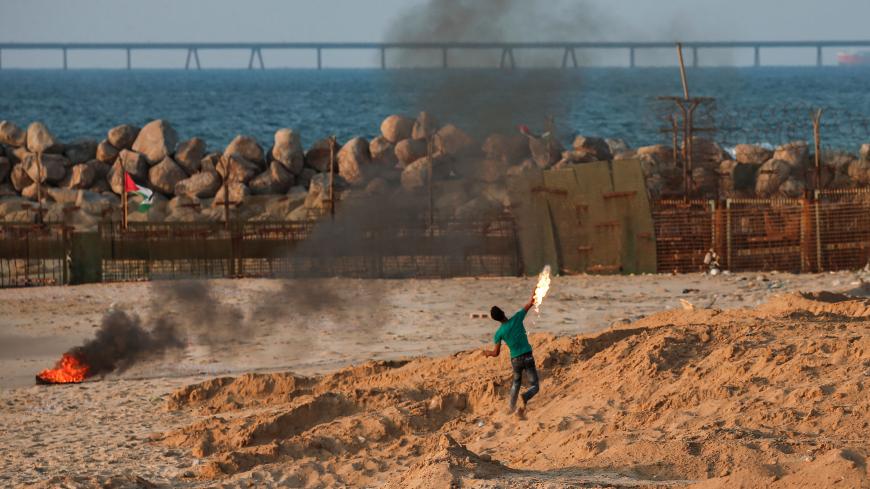 A Palestinian protester throws a molotov cocktail on a beach along the Gaza sea barrier on the border with Israel near Kibbutz Zikim, north of Beit Lahia in the northern Gaza Strip, Sept. 2, 2018. - Mahmud Hams/AFP/Getty Images

Security tension prevails in the Gaza Strip between Hamas and Israel following the latest escalation round on Jan. 7. Israel responded to a Palestinian rocket and Molotov cocktails launched from Gaza into Israel earlier the same day. The Israeli air force struck Hamas positions and the Israeli government froze the transfer of the third installment of the Qatari financial grant to the Gaza Strip. The $150 million grant aims to settle the salaries of Gaza-based Palestinian Authority employees for six months under a Qatari-Israeli deal with Hamas reached in October 2018.

A week earlier, Israeli Channel 10 reported that the Israeli army announced the completion of the construction of the sea barrier off the beach of Zikim, on Gaza’s northern border. The barrier, which is 200 meters (656 feet) long and six meters (20 feet) high and took seven months to build, is fitted with sensors to detect the movement of Hamas infiltrators.

The Israeli army noted in an official statement on May 27, 2018, that the sea barrier consists of three layers: one underwater, then a layer of boulders and on top a barbed wire fence. Israel's Defense Ministry said the underwater barrier would be “impregnable breakwater.”

Israel's completion of the sea barrier along Gaza's west coast coincides with continued works for the construction of an underground barrier east of Gaza that started in September 2016. The underground barrier aims to cut off Hamas members from digging tunnels into Israel. Outgoing Israeli army Chief of Staff Gadi Eizenkot said Jan. 8 during a farewell visit to southern Israel that he hopes the underground barrier would be completed by the end of the year.

Mahmoud Mardawi, a Hamas leader and former official at Izz ad-Din al-Qassam Brigades, Hamas’ armed wing, told Al-Monitor, “Israel is aware that Hamas is developing its naval military capabilities. The movement is seeking to improve its combat experience in this field. We will circumvent the Israeli naval barricade and it will not prevent us from launching naval operations against the occupation army in any future military confrontation.”

In a statement on May 27, 2018, then-Defense Minister Avigdor Liberman said the barrier would “prevent the possibility of penetrating Israel by sea. This is another blow to Hamas, which will lose yet another strategic ability in which it invested vast amounts of money.” In June 2018, Israel announced destroying a Hamas-dug undersea tunnel in northern Gaza.

Al-Qassam Brigades had revealed in 2015 the details of an infiltration operation by a Hamas commando unit into an Israeli base in the coastal area of Zikim during the 2014 war on the besieged enclave. It noted that the infiltration was preceded by a survey and data collection process about the target location. The commando unit then swam and dived long distances to reach the base, where its fighters clashed with the Israeli army.

Hamas military expert Rami Abu Zubaydah told Al-Monitor, “The barrier will not completely prevent the Palestinians from infiltrating the Israeli army lines, but it will make their task more difficult as their swimming and diving distances are increased. Hamas' naval units are ready and on the offensive. Its members can move and operate underwater thanks to their breathing equipment. The unit has upgraded its operation methods and acquired equipment enabling its members to cross distances underwater much longer than distances crossed on land.”

Israeli army officers voiced concerns in June 2018 that Hamas would use its upgraded and improved naval unit in upcoming confrontations in the Gaza Strip.

Military expert Eyal Levy had talked to Israeli Maariv newspaper about the threat of Hamas' naval units in 2016. He pointed to these units’ ability to carry out armed operations and infiltrations behind the Israeli lines within minutes by a fishing boat and to reach the pipeline on Israeli shores because of the absence of a fence around the subsea oil pipeline.

Maj. Gen. Wasef Erekat, a Palestinian military expert in the West Bank and former artillery commander of the PLO forces, told Al-Monitor, “The construction of the sea barrier confirms Israel's concerns about Hamas' naval military capabilities. Israel seeks to restrict the ability of the naval commando unit fighters. Armed factions in Gaza are engaged in guerrilla warfare with the Israeli army and they will search for alternatives to overcome the maritime barrier. Israel may seek to turn the underwater barrier with Gaza into unilaterally political borders, such as the eastern wall of Gaza and the separation wall in the West Bank.”

Palestinian Sama News website reported on Aug. 6, 2018, that Israeli security quarters believe Hamas would once again use its naval force in the coming war, and that these forces could reach the power station in Ashkelon, 4 kilometers (2.5 miles) from northern Gaza, thanks to the advanced diving skills of Hamas' sea infiltrators.

Over the past few years, the Israeli army has thwarted attempts to smuggle underwater weapons and diving equipment to Hamas through the Kerem Shalom crossing in southern Gaza.

Said Bisharat, a Palestinian expert on Israeli affairs, told Al-Monitor, “Israel’s rush to complete the construction of the sea barrier in seven months indicates that the Hamas naval commando unit will be the first target in any upcoming confrontation. Israel has spoken a lot about this unit and it sees it as an alternative for the Hamas tunnels that the Israeli army keeps discovering. Hamas ought not to underestimate what Israel is preparing to confront its naval capabilities. Israel is constructing physical obstacles, installing sea sensors, using technological methods, training staff and pursuing Palestinian fishermen in search of any security information about Hamas infiltrators.”

Israel does not hide its concern that Hamas will target its oil and gas fields in the Mediterranean Sea. This would cost it massive financial losses. For Hamas, this would be a milestone military and moral achievement.