Hamas has captured an Israeli military surveillance balloon that accidentaly landed in northern Gaza, and Israel now fears they'll use it against them. 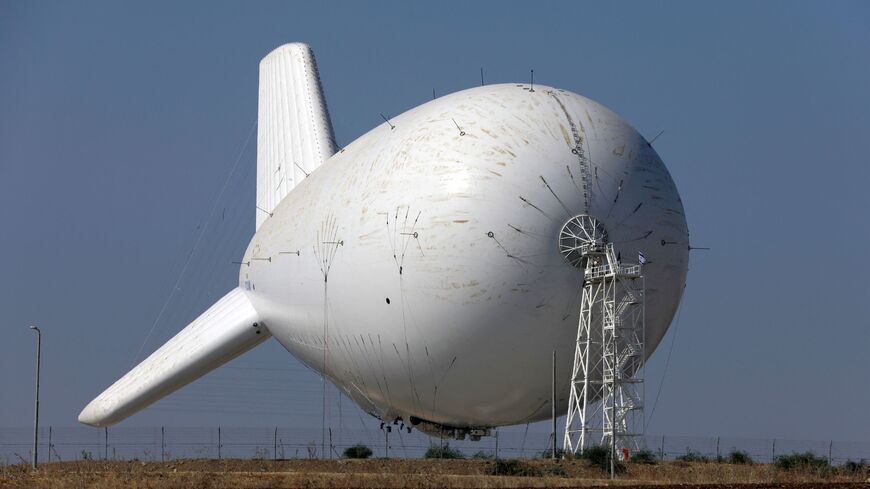 GAZA CITY, Gaza Strip — Members of the Izz al-Din al-Qassam Brigades, the military wing of Hamas, seized an Israeli military surveillance balloon June 17. The observation balloon crashed in the Beit Hanoun area of the northern Gaza Strip after it disconnected from its anchor. The Israeli army attempted but failed to destroy it before Hamas members could find it.

The Israeli army deploys a number of these balloons, fitted with sensitive sensors and cameras that are not found in the Gaza Strip to monitor the entire border area. Amir Bohbot, military editor and senior defense analyst for Walla, Israel's leading news website, described the incident as a “dangerous event,” but the Israeli army reassured it was not afraid of a “significant” leak of information. It pulled out the other balloons from the borders as a precautionary measure.

An official in the military wing of Hamas told Al-Monitor on condition of anonymity that Israeli forces tried to recover the balloon, but were unable to do so.

He revealed that the balloon is equipped with six high-resolution cameras with 360 degrees of visibility, night and fog visibility and thermal imaging. The balloon was captured undamaged, and “we are now working on re-operating this balloon to use it to monitor the movements of the Israeli army,” he said.

The Israeli newspaper Yedioth Ahronoth described some of the technical features of the balloon, which is also sold to foreign armies. The article said that the balloon crashed due to an error by the operating officer, and that the winds pushed it towards the Gaza Strip.

The cameras carried by the balloon cost 2 million shekels [$588,000], it said. They are made by Israel and align with the highest global quality standards and cannot be compared to the cameras of drones, noting that they offer a monitoring view of a distance of 5 km with high accuracy, in day and night.

In contrast, Hamas possesses simple tools to monitor the movements of the Israeli army. It uses locally made drones and cameras that can be purchased from the market.

Hamas was able to dismantle this equipment and devices and obtain intelligence information. Hamas also obtained the real names and photos of the spy unit operatives.

Also, in May 2018, Hamas discovered the largest Israeli spying device on its communications network in the middle of the Gaza Strip. When its members tried to dismantle it, it exploded, killing six of them.

An investigative report by Al-Jazeera last May revealed an operation by Izz al Din Al-Qassam during which snipers hit the majority of Israeli surveillance cameras along the eastern border of the Gaza Strip during the May 2021confrontation, in order to prevent the Israeli army from monitoring the movements of its fighters. The report noted that Hamas seizes Israeli drones that fell in recent years in the Gaza Strip and re-uses them against the Israeli army.

Hours after Hamas seized the balloon, Israeli warplanes bombed one of the movement's military positions and destroyed one of its observation points in the northern Gaza Strip, which overlooks the settlement of Netiv Haasara.