Israel is spending 3 billion shekels to build a steel barrier along the Gaza border that Palestinians and even Israelis believe will not be 100% effective against Hamas-built tunnels. 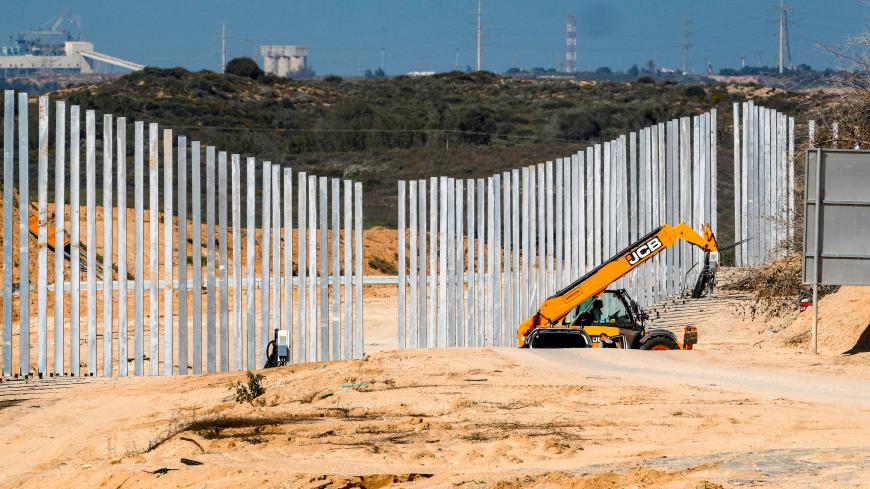 Construction work is carried out on the new fence between Israel and the northern border of the Gaza Strip, Kibbutz Erez, Israel, Feb. 4, 2019. - MENAHEM KAHANA/AFP/Getty Images

GAZA CITY, Gaza Strip — Israel has begun the third and final phase of a massive barrier along its border with Gaza. On Feb. 3, Israeli Prime Minister Benjamin Netanyahu tweeted, “Over the weekend, we began building the above-ground barrier along the Gaza border. The barrier will prevent terrorists from Gaza from penetrating into our territory on the ground.” He added, “If the quiet is not maintained in Gaza, we will not hesitate to act.”

The galvanized steel wall will be 40 miles long and 20 feet high when completed, which, it is estimated, will be by the end of the year. Its primary purpose is to prevent Palestinians from tunneling under the border and into Israel to launch attacks.

The first phase began in 2016, with workers digging to install the underground portion of the barrier. An Israeli military official told the New Arab that the metal-reinforced cement wall is about one meter thick, but declined to say how deep it runs. Estimates of the depth have varied, with one Israeli official being quoted as saying it's “deep enough.” Motion sensors will be installed to detect any attempts at tunneling.

The second phase got underway in May 2018 and ended last month. That portion consisted of building a sea barrier at the Ashkelon extending 656 feet out into the Mediterranean and 20 feet above the water.

The Times of Israel reported on Feb. 3 that the wall will contain 20,000 tons of steel. It will stand meters away from the current border fence, which will be left in place. The Israeli army has deployed drones and personnel to protect the workers building the wall, which is expected to cost around 3 billion shekels ($825 million).

Speaking to Al-Monitor, Yusuf al-Sharqawi, a military expert and retired general in the PLO's ranks, noted the impetus behind the wall, stating, “The armed operations carried out by the Palestinian factions during the war in 2014, especially by Hamas, forced Israel to construct a barrier to prevent the recurrence of such armed operations.” He does not, however, believe the barrier will be successful in eliminating tunnels or armed operations.

Abu Ahmed, the senior military commander of the Popular Resistance Committees in Gaza, told Al-Monitor that the Palestinian factions have the military and engineering capabilities to penetrate the wall underground and above ground. He noted how over the years the various factions have been able to overcome many of the obstacles Israel has devised to prevent attacks.

Regarding the latter, Abu Ahmed cited the example of Israel planting hundreds of trees along the border to block the Palestinians' view of its military positions. In November, however, Hamas was able to target a bus transporting Israeli soldiers near the border, striking it with a Kornet missile, which represented a new challenge for Israel.

Speaking to Al-Monitor, Hamad al-Reqeb, a Hamas leader, expressed confidence that the Palestinians can overcome obstacles posed by the wall and other Israeli measures on the border. He conceded, however, that once the wall is completed, “Israel will have tightened its continuous land and sea blockade on the Gaza Strip since 2007. The siege has affected all Palestinian factions and sectors in the Gaza Strip.” Since March, Palestinians in Gaza have been trying to lift the blockade through peaceful protests along the border billed as the Great Return March.

Although the design of the barrier project would appear to be fit for purpose, some senior Israeli army officials told Haaretz in September that the barrier will not entirely eliminate the threat posed by Hamas' tunnels. Hesham el-Maghary, a security and military expert close to Hamas and head of Al-Awda University College in Gaza, expressed the same sentiment to Al-Monitor.

“Palestinian factions have the military tools that could overcome this barrier whether underground, on land or at sea,” said Maghary. “The factions don't reveal what tools those might be, but analysts believe the factions might resort to bombing the wall or targeting it with guided missiles.”

Maghary said Israel is also sending a political message with the construction of the Gaza wall as well as the separation barrier in and around the West Bank. Through them, he asserted, Israel is presenting the Palestinians with its vision of its permanent borders.