Why is Egypt building a wall along its border with Gaza?

Although it coincides with Washington’s Mideast peace plan, observers and experts say they believe that safeguarding and boosting national security are the real reasons behind Egypt's decision to build a new wall along its border with the Gaza Strip. 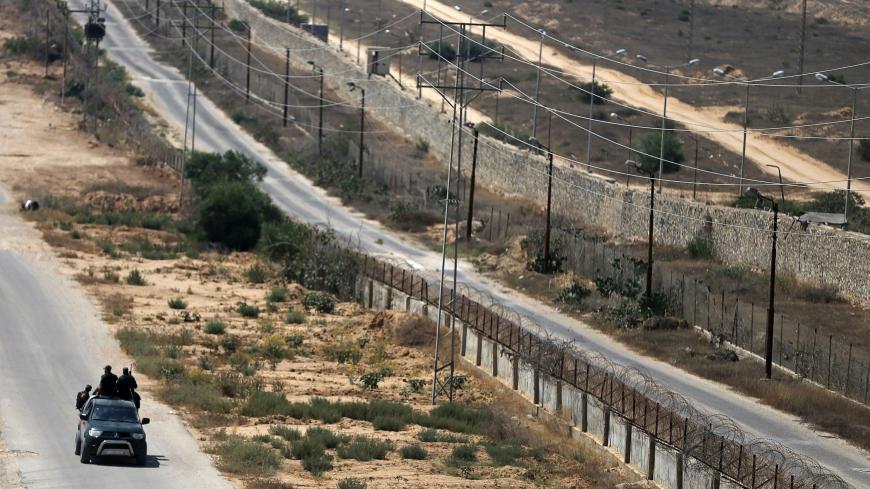 CAIRO — Al-Monitor revealed Feb. 14 that Egyptian authorities had begun the first phase for building a tall concrete wall on the border with the Gaza Strip. Tribal sources told Al-Monitor that the wall will extend from the Kerem Shalom crossing to the Rafah border crossing. Meanwhile, the Egyptian armed forces have not made any official announcement on the wall.

The sources said the wall is 6 meters (20 feet) high and goes 5 meters (16 feet) underground and will be parallel to the old concrete barrier topped with barbed wire that was built on the border in early 2008; the walls will be separated by a distance not exceeding 10 meters (33 feet). The new wall, which sources said was begun Jan. 27, aims to prevent the entry of armed militants from Sinai into Gaza and close the remaining tunnels along the border.

The BBC also reported Feb. 18 that the wall will have observation posts placed every 100 meters (328 feet).

An Egyptian security source told Al-Monitor over the phone that the concrete wall along the border with the Gaza Strip will be 13 kilometers (8 miles) long and stretch from the Kerem Shalom crossing to the seacoast at Rafah.

The source, who declined to be named, said the implementation plan for the wall was developed nearly two months ago. The source further said that a 2-kilometer (1.2-mile) segment has been finished and that the rest will be completed in the next few weeks.

The source indicated that Egypt is rushing the construction work, which is designed to allow the government to manage entry and exit along the border with the Gaza Strip, as Cairo seeks to control all of the underground tunnels that can be used for terrorist operations, drug trafficking and weapons smuggling.

After US President Donald Trump detailed his Mideast peace plan Jan. 28, the Egyptian Foreign Ministry expressed in a statement the same day its “appreciation for the US ongoing efforts to reach a just and comprehensive peace in terms of the Palestinian cause in a way that would boost security and stability in the Middle East and end the Israeli-Palestinian conflict.”

The statement added, “The US administration’s initiative should be looked at based on the idea that it is important to reach a settlement to the Palestinian cause” and called on the “two sides to carefully consider the US vision for peace.”

Mustafa Kamel al-Sayed, a professor of political science at Cairo University, told Al-Monitor that security concerns may be behind the construction of the new separation barrier. This is true particularly since Palestinian President Mahmoud Abbas firmly rejected Trump’s peace plan and said the Palestinian Authority would be severing ties with Israel and the United States; the Arab League rejected the plan as well, Sayed added. All this could result in some terrorists and extremists posing a threat to the Egypt-Gaza border, he said.

Sayed said the Egyptian position on the plan is not crystal clear, as it has neither given its full supoort nor a categorical rejection and apparently seeks to play the middle. This is why Cairo appeared to call on the Palestinian and Israeli sides to study the plan and adjust it and said it valued the US efforts that led to the proposal; he said Egyptian authorities view Trump's plan as a serious historical opportunity to end the decades-long conflict.

Sayed said the Egyptian statement is conciliatory to the US side because it does not want to lose the United States as a strategic ally, particularly since Washington is the mediator in the Grand Renaissance Dam negotiations. Thus, Egypt does not want to express a hard-line position on the US plan to avoid any obstructions as Cairo tries to come to terms with Ethiopia on the technical details on the filling of the dam, he said.

Khaled Okasha, a member of the National Counterterrorism Council and director of the Egyptian Center for Strategic Studies, said Egypt is building this wall to safeguard its national and border security and does not seek to isolate the Gazans and Palestinians. He indicated that the multiple terrorist attacks that happened in the past few years, the use of the tunnels by terrorists to infiltrate into Egypt and to smuggle weapons and improvised explosive devices and the use of the tunnels by Bedouins to smuggle drugs all prompted Egyptian authorities to put serious consideration into the building of the wall.

Okasha told Al-Monitor by phone that there is a pressing need to build the new barrier at this point in time following the Israeli and US introduction of Washington’s peace plan. This is because this announcement is likely to cause security problems at Egypt's eastern border, particularly since Egypt called on the two sides to study the plan and did not rebuff it categorically as the Palestinians have done.

He continued, “Some have said that the Egyptian stance is disappointing toward the Palestinian cause, and that it consented to the US-Israeli plan. That is untrue.” Okasha said, “The thing is that Egypt recognizes the US efforts to launch the plan, and called on the two sides to carefully consider it and to hold direct talks based on which amendments would be added to the agreement. Subsequently, a just settlement that would guarantee the Palestinian people’s right and sovereignty over their territories will be reached,” he said.

Okasha said that Egypt and the Gaza Strip have been separated by a much shorter barrier that did not end the tunnel problem and that the rise of terrorist attacks in recent years was the reason why the new wall is being built. He underlined that Egypt is an independent state with full sovereignty over its territory, and underscored that this barrier is being built at a short distance from the previous wall and does not hurt anyone.