For the 2 million Palestinians who have been living in a tight siege in Gaza since 2006, Israel's new high-tech separation wall has turned the enclave into the world’s largest open-air prison. 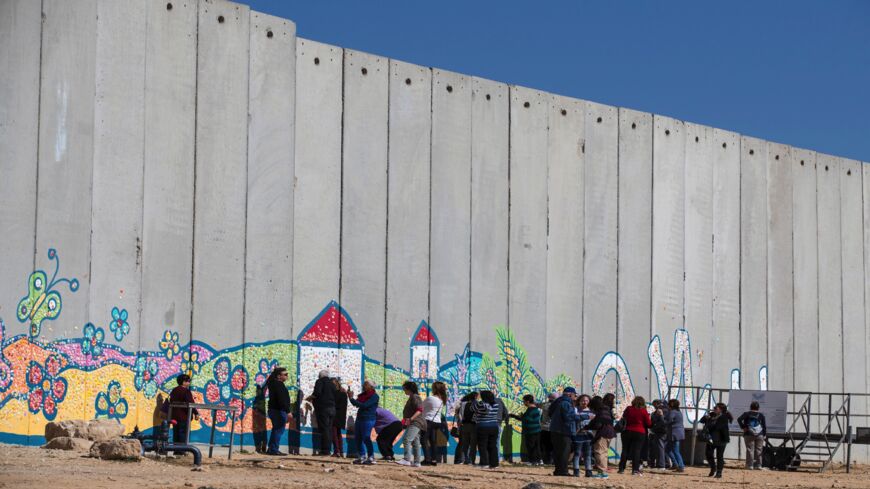 Israeli tourists take pictures of graffiti on a protective cement wall in the Israeli Kibbutz of Netiv Haashara near the border between Israel and the Gaza Strip on Feb. 7, 2017. - JACK GUEZ/AFP via Getty Images

Some 2.11 million people living in Gaza are feeling more and more trapped with Israel’s inauguration on Dec. 6 of the upgraded security wall on the Gaza border after three and a half years of work.

The move tightens the siege imposed on the coastal enclave ever since Hamas won the legislative elections in 2006. The blockade had intensified after Hamas took control of Gaza by force and expelled members of the Fatah movement led by President Mahmoud Abbas following bloody confrontations in 2007.

Israel had come up with the idea of the new barrier to respond to the threat posed by the tunnel network that Hamas built from Gaza into it. Hamas had used the tunnels during the 2014 war on Gaza as platforms for launching rockets toward Israel and in attempts to kidnap Israeli soldiers.

The galvanized steel wall weighs about 20,000 tons and has a height of about 6 meters. It stretches both above and under the ground over 65 kilometers along the border from the new sea barrier near Zikim beach in the north to Kerem Shalom crossing in the south.

At the inauguration ceremony, Israeli Defense Minister Benny Gantz said, “This barrier … deprives Hamas of one of the capabilities that it tried to develop and places a wall of iron, sensors and concrete between it and the residents of the south.”

In a statement, the Israeli Defense Ministry said that the wall is similar to the one that runs along the Israeli-Egyptian border. Construction of the new barrier with innovative security fortifications kicked off in 2017, and its cost amounted to 3.5 billion Israeli shekels.

“There is no place in the world that has built an underground barrier,” said Brig. Gen. Eran Ofir, the commander in charge of Israel's border wall.

According to the Defense Ministry, more than 1,200 people from around the world are working on this project along the border with six concrete plants being set up and 330,000 trucks pouring 3 million cubic meters of concrete. “Enough to open a road from Israel to Bulgaria,” Ofir said. “Another 140,000 tonnes of iron and steel were used in the construction, equivalent to the length of a steel wall from Israel to Australia.”

On the other hand, Palestinian resistance factions have yet to comment on their ability to penetrate the wall, which has not been tested since the 2014 war. However, sources in the resistance revealed to the Lebanese newspaper, Al-Akhbar, that “the resistance engineers were able to find practical solutions that would make the fence useless during military battles.”

Hind Judeh, 37, a writer and poet from Gaza City, told Al-Monitor, “With Israel’s completion of the security wall around Gaza, the feeling of being trapped in an open-air prison is all the more real, and ​​Israel’s apartheid against the Palestinians is now at its best." She added, “Israel's mentality when it comes to its relationship with Gaza is getting worse over time and will inevitably lead to no stopping clashes and wars. Palestinians feel more oppressed now, but this will only strengthen their resolve to resist the occupation.”

In turn, Abu Mohammad Iram, 61, who lives in Al-Shati refugee camp west of Gaza City and works as a fisherman, told Al-Monitor, “Gaza residents live in a prison just as Palestinian prisoners live in Israeli prisons. The only difference is that Gaza lives in a larger prison. Israel controls everything that enters and exits Gaza.”

He added, “I own a boat that needs fiberglass to be repaired, but Israel prevents the entry of this material on the pretext of being used for military purposes. Israel also limits the fishing area to 9 nautical miles at best. Even our sea is under siege.”

Al-Monitor also spoke to Suhad Al-Rabaea, 29, who lives in Nuseirat, central Gaza, and has a master’s degree in international relations from Al-Aqsa University in Gaza. “The wall that the occupying state built on the Gaza border is a complete isolation of the Gaza Strip from the rest of the Palestinian territories. This will suffocate Gaza and prevent any infiltration into the territories occupied in 1948.”

She continued, "The idea of ​​the security wall around the Gaza border that the occupation believes would guarantee its security destroys any hope of the two-state solution.”

Rafqa Eid, 30, a medical laboratory science graduate from Al-Azhar University in Gaza and a volunteer in the BDS movement, told Al-Monitor, “The construction of the wall on the Gaza border will not provide security for Israel. Our people will continue its resistance guaranteed by international law, in all its forms, whether through popular or armed resistance. Six prisoners managed to escape from a closed-cell room in the fortified Gilboa prison. No wall, no matter how strong, will keep the Palestinians from trying to achieve freedom.”

Eid praised the achievements of the BDS movement, which is deemed one of the largest means of international pressure aimed to push banks, universities and other entities to withdraw investments from and boycott the state of Israel.

Taysir al-Burdini, 50, a freed prisoner who spent 20 years in Israeli prisons, lives in the city of Rafah in southern Gaza. He told Al-Monitor, “Building a security wall on the Gaza border is a normal practice by the Israeli occupation state, which is trying to fully protect itself by building walls. This is similar to the construction of the separation barrier in the West Bank that Israel began building in 2002.”

He argued that Israel’s bet on a security solution has proven to be unsuccessful over the years of the Palestinian-Israeli conflict. Burdini concluded, “The solution is the peace option dubbed by late Palestinian President Yasser Arafat 'the peace of the brave,' where both the Palestinian and Israeli peoples would live in peace and freedom and work to achieve the right of self-determination for the Palestinian people."