How will Israel protect its vehicles on Gaza border?

Three days after Izz ad-Din al-Qassam Brigades fired a guided missile at an Israeli vehicle, the Israeli army embarked on setting up a new concrete barrier to protect its vehicles in the border areas. 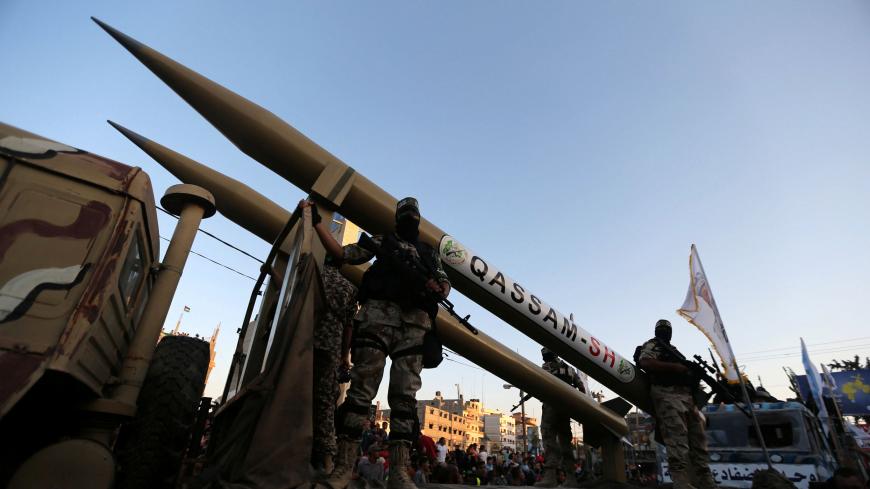 GAZA CITY, Gaza Strip — The Israeli army embarked May 8 on the construction of a new concrete barrier on the border with the Gaza Strip. The barrier aims to protect the open border areas from the rockets that Hamas and Islamic Jihad possess.

According to The Times of Israel, the Israeli army said in a statement May 8, “As a result of lessons learned from previous rounds of fighting … there is a major effort to protect certain areas adjacent to the Gaza Strip to adapt the areas to threats, including the threat of anti-tank and direct fire.”

The 600-meter-long (0.4-mile-long) and nearly 2-meter-high (6.5-feet-high) barrier will be erected in the open areas on the eastern border of the Gaza Strip.

The Israeli army’s decision was made three days after Izz ad-Din al-Qassam Brigades, Hamas’ military wing, fired May 5 a guided missile at an Israeli vehicle, east of Beit Hanoun, in the northern Gaza Strip, which killed one Israeli. This happened during the last military confrontation May 4-5 between Israel and Gaza.

In the same article, The Times of Israel reported the Israeli army as saying, “That strike was one of two cases of Hamas firing the Kornet anti-tank guided missile, a precise, deadly and costly weapon …”

The second operation took place May 5, with Izz ad-Din al-Qassam Brigades, along with Islamic Jihad’s military wing, Saraya al-Quds Brigades, firing another guided missile at an Israeli armored personnel carrier near the eastern border in the central Gaza Strip. No casualties have been reported.

Hamas had already fired a Kornet anti-tank guided missile at an Israeli military bus Nov. 12, on the eastern border of Jabalya town, in the northern Gaza Strip, which destroyed the bus and badly wounded an Israeli soldier.

Speaking to Al-Monitor on condition of anonymity, an al-Qassam Brigades' military source stated that setting up a concrete barrier on the Gaza border “will not stop the resistance from firing guided missiles at Israeli vehicles in any new confrontation.”

He added, “The resistance is following up closely on the construction of the new barrier and is examining means and how to break through it. I believe that getting past the barrier to conduct other operations against Israeli military targets will not be a hard task."

Hamas spokesman Abdel Latif al-Qanou told Al-Monitor, “Setting up a concrete wall on the Gaza border shows that the occupation and the settlers are terrified.” He added that the barrier will neither “bring them safety nor prevent the resistance from dealing its blow.”

Ahmad al-Moudalal, an Islamic Jihad leader, told Al-Monitor, “This concrete barrier will not affect our ability to cause Israel genuine pain. The resistance’s capabilities are growing daily and [the resistance] is capable of getting past the barrier. Israel will realize in any future confrontation that this barrier is pointless.”

He noted that targeting the Israeli vehicle and armored personnel carrier in the last confrontation, as well as filming and broadcasting it, “is a message to Israel that the resistance is capable of carrying out operations against Israeli military targets inside Israel, not only in Gaza.”

Kayed al-Ghul, a member of the Popular Front for the Liberation of Palestine's political bureau, told Al-Monitor, “Building this new barrier is an indication that Israel failed to protect its vehicles on the border via its military techniques and defense systems.”

Ghul noted that firing guided missiles at Israeli vehicles “has created a balance of deterrence to Israel, despite its obvious supremacy in terms of military capabilities.”

Speaking to Al-Monitor, Yusuf al-Sharqawi, a retired general, said, “Israel is pursuing the policy of building barriers on the border with the Gaza Strip. It is still working on setting up an underground barrier along the border with Gaza to counter the resistance’s tunnels. Presently, the Israeli desire is to build another above-ground barrier to stop its vehicles from being targeted.”

Sharqawi perceived that the new barrier “is a pointer that Israel fears that the truce agreement with the resistance in Gaza does not survive. This is why it is fortifying its open border areas in order to protect its military vehicles from the resistance in any future confrontation.”

He explained that Hamas and Islamic Jihad in Gaza fired guided missiles at the Israeli bus and vehicle to prevent an Israeli ground operation from taking place in the Gaza Strip in the last military confrontation. He added that the resistance succeeded in doing so, as the Israeli action was limited to airstrikes.

Speaking to Al-Monitor, Ayman Rafati, a political analyst specialized in Israeli affairs and author for the Hamas-affiliated Al-Resalah newspaper, said that the barrier will be built in the northern and southern parts of the eastern border area with the Gaza Strip, on land that lies lower than the land across the border in Gaza, which makes it more vulnerable to attacks.

He noted that setting up the barrier points at the Israeli intelligence’s failure in detecting operations by Hamas and Islamic Jihad before they happen. He also pointed out that it consists of a message to the Israeli community that the army is seeking to protect Israelis residing near the border with the Gaza Strip.

Nevertheless, Rafati believes that the Israeli government “is pulling the wool over the eyes of the Israelis because the idea of erecting barriers is a complete failure. If [Israeli Prime Minister Benjamin] Netanyahu wants to protect Israelis on the Gaza border, he would have built the barrier along the 64-kilometer-long [40-mile-long] border. Yet this will prevent his soldiers from seeing the Palestinian moves on the Palestinian side of the border.”