After cease-fire, Israel prepares for next round of Gaza conflict

Seniors in the political and security echelons are convinced that the current cease-fire with Hamas does not mean quiet for a very long time. 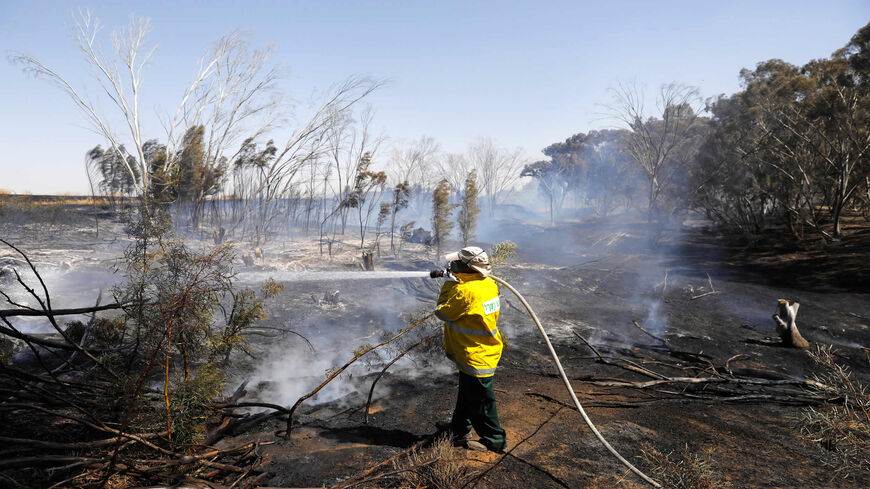 An Israeli farmer tries to extinguish a fire caused by inflammable material attached to a helium balloon flown by Palestinian protesters from across the border, in a wheat field near the Nahal Oz kibbutz, along the border with the Gaza Strip, May 15, 2019. - Menahem Kahana/AFP via Getty Images

Even wars have their comic moments. Israel’s Operation Guardian of the Walls ended last week on such a note when Tzachi Hanegbi, a member of the ministerial security Cabinet, declared to the press he was optimistic that Hamas would not dare attack Israel for the next 15 years.

The Israel-Hamas cease-fire went into effect at 2 a.m. on May 21. Three days later, on May 23, several balloons launched from the Gaza Strip landed in Israeli fields with pictures of Hamas shahids. Thus, it seems that the countdown toward the next military clash had begun. Apparently, no one in the military or government in Israel is under any illusion regarding the future.

During the 11-day fighting, the head of military operations, Maj. Gen. Aharon Haliva, hinted at a change in Israel’s future policy on the periodic Hamas rocket attacks against Israel, but the nature of the change in the rules of the game remains unclear. Haliva told the press, “I didn’t assess that Hamas would fire rockets at Jerusalem. But the big mistake was Hamas’s. It has paid a price for it, and will continue to pay a price for it.”

Israel initially thought that Hamas’ military chief Mohammed al-Deif, who broke years of silence recently to issue threats against Israel, was behind the decision to strike. In hindsight, it now appears that Yahya Sinwar, the organization’s Gaza chief, was the prime motivator. “He [Sinwar] underwent a very abrupt change,” a top Israeli security source told Al-Monitor on condition of anonymity, attributing it to the traumatic experience of nearly losing the March elections for the organization’s Gaza leadership. The source described how Sinwar went “almost overnight” from being a responsible leader negotiating with Israel to achieve a better life for his people by providing them with electricity, jobs and schools, to a “modern-day version of Salah ad-Din.”

Sinwar paid a steep price for his crusading militancy. “When he emerges from the bunker and looks around, he will realize the extent of his mistake,” a senior Israeli officer told Al-Monitor on condition of anonymity.

Overall, Israel’s military is satisfied with the results of its military campaign. Failing a government order to topple Hamas from power, the army is forced to accept that it can only “return fire” periodically in response to Hamas attacks in order to achieve calm until the next time.

The military’s positive assessment of its achievements stems from Hamas’ failure to exact any significant toll on Israel, unlike the damage Israel inflicted on Hamas. In addition to smashing the vast Hamas underground tunnel network and killing two commando units heading for a raid into Israel through the tunnels, Israel says it has wiped out the Hamas naval unit, including unmanned submarines possibly designed to blow up offshore Israeli gas rigs, and its “suicide drones” arsenal.

“All they have left are the rockets, which [missile defense system] Iron Dome countered at a satisfactory rate. All in all, the balance has tilted toward a Hamas defeat and an Israeli victory,” a military source summed up, speaking on condition of anonymity.

Evaluations of the operation conducted in recent days by the top brass of the Israel Defense Forces (IDF) have concluded that Hamas was greatly surprised by Israel’s willingness to engage in a significant round of fighting in response to the rockets launched at Jerusalem. “What is happening to Sinwar right now is what happened to [Hezbollah Secretary-General] Hassan Nasrallah when Israel launched the Second Lebanon War [in 2006],” the senior military source said. “Had Sinwar known the price he would pay, he would have surely shelved the idea of firing rockets at Jerusalem on Jerusalem Day.”

On the other hand, Israel is well aware that Hamas has scored a resonating victory in public perception. Its military offensive completely marginalized the rival Palestinian Authority (PA), disrupted the celebrations marking the unification of Jerusalem, sent Israeli lawmakers fleeing for shelter during a plenary debate, took social media by storm and crowned itself the official guardian of Islam’s holiest Jerusalem site, Al-Aqsa Mosque. Israeli public diplomacy proved ineffectual in light of the rubble in Gaza and the decisive victory of which Hamas boasted on social media when rioting broke out in East Jerusalem and in mixed Jewish-Arab Israeli towns.

The IDF could only bask in the glow of its operational success, quality tactical intelligence and the fact that it forced Hamas to hide its elite “Nukhba” commando after killing two of its units in the tunnels. It’s as if we would hide Golani and the paratroopers during a war, a senior Israeli official said during one of the evaluation sessions, referring to the famed Israeli infantry brigade.

The IDF is also proud of the precision with which it located and bombed the tunnels from which Hamas planned to conduct guerrilla warfare against the IDF and where its leaders planned to hide from Israeli bombs and assassination attempts. Ultimately, Israel is convinced it deprived Hamas of all of its underground staging and defense spaces, which were also the organization’s main strategic weapon, leaving it more exposed than ever.

The IDF is also pointing to Hamas’ ultimate failure to provoke sustained anti-Israel violence in two important external arenas — the West Bank and Israel’s mixed towns. The fires that Hamas lit in both places during the clash with Israel have been doused. On the other hand, Israeli assessments foresaw that Sinwar would continue to hide for fear of Israeli assassination attempts. But just a day after the cease-fire, Sinwar emerged to a hero’s welcome on the streets of the Gaza Strip.

What now? The IDF has presented the government with several recommendations, among them Israeli insistence that Qatar’s funding for Gaza be funneled through the PA for economic projects rather than given directly to Hamas as it has been in recent years. It has also recommended withholding reconstruction aid for Gaza until Hamas hands over the bodies of two Israeli soldiers killed in 2014 fighting and two Israeli civilians who crossed the border by mistake and are believed held by the organization.

The most important military recommendation is that Israel refuse to accept any longer what it dubs “a drizzle of rockets” and fire balloons to which Israel has grown accustomed as a constant nuisance. “Whatever is launched from there — even if it doesn’t hit anything — must be answered with a real offensive response, deadly and painful,” another very senior officer told Al-Monitor on condition of anonymity.

Declarations aside, experience shows that the bizarre routine between Israel and Gaza has a dynamic all of its own. Prime Minister Benjamin Netanyahu has allegedly more important problems to deal with given his continued failure to form a government and the increasing likelihood of a fifth election. Israelis do not have the stamina for another round of fighting with the heavy summer heat approaching. The exhaustion on both sides will generate another period of calm with occasional bloody skirmishes along the border. The past is destined to repeat itself.