The IDF worries about the simultaneous speeches this week of Hezbollah Secretary-General Hassan Nasrallah and Hamas Gaza commander Yahya Sinwar, as both groups could launch simultaneous and coordinated attacks against Israel 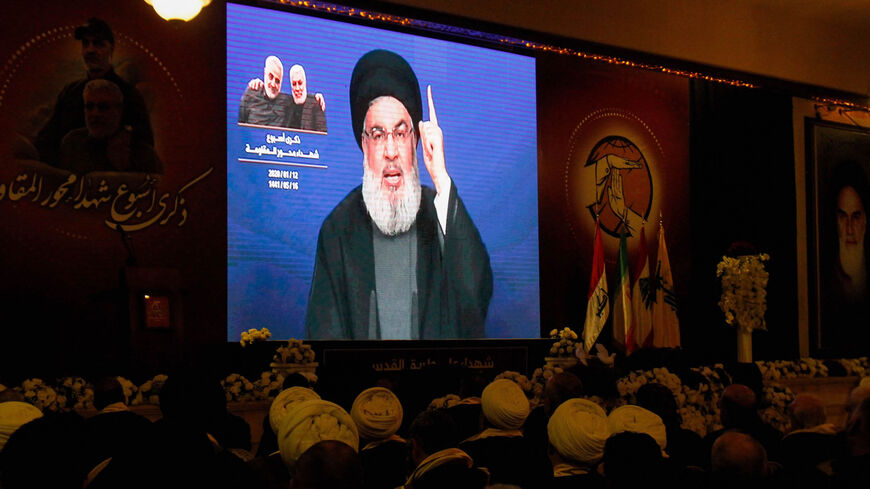 Supporters of the Shiite Hezbollah movement watch as the movement's leader Hassan Nasrallah delivers a speech on a screen in the southern city of Nabatieh, Lebanon, Jan. 12, 2020. - Mahmoud Zayyat/AFP via Getty Images

Israeli media described the two-hour address delivered May 25 by Hezbollah Secretary-General Hassan Nasrallah as the “coughing speech.” Right after the televised speech, Israel’s Military Intelligence issued an assessment that Nasrallah, who had not been seen in public for weeks, appears to have contracted the coronavirus but refuses to take a test. Nasrallah, who appeared thin and pale, obviously had trouble breathing as he coughed his way through the speech, and his medical condition overshadowed its more interesting contents.

In fact, two speeches delivered at almost the same time — one in Beirut and one in the Gaza Strip, one by the head of a Sunni terrorist organization (Hamas Gaza leader Yahya Sinwar) and the other by a Shiite one (Hezbollah’s Nasrallah) — conveyed the same message to Israel. Both warned that Israel risks war if it tries to change the status quo in Jerusalem, if it takes any unilateral steps at Al-Aqsa Mosque compound, one of Islam’s holiest sites. Nasrallah even described this future conflagration as a “regional war.”

“Everyone is focusing on his cough,” a former senior Israeli intelligence source told Al-Monitor this week on condition of anonymity. “They are missing the point. Even if he has the coronavirus, he will most likely recover. Maybe spending 15 years in airless bunkers has also affected his breathing. Either way, in my estimation he will live to cough for many years.” According to the source, the main takeaway from the speech is Nasrallah’s message and the fact that it appeared almost coordinated with Sinwar’s appearances in Gaza this week.

“Nasrallah should be taken seriously; he is Israel’s most credible enemy, he usually doesn’t make empty threats,” a senior Israeli security source told Al-Monitor on condition of anonymity. “The fact that he joined Sinwar at this timing and announced that any unilateral Israel move in Jerusalem would lead to war should be treated in Jerusalem as a very serious warning.”

A similar assessment was voiced in recent weeks by former Knesset member Zvi Hauser, until recently chair of the Knesset’s Foreign Affairs and Defense Committee. “This is probably the last time that Israel will confront Hamas alone,” Hauser told Al-Monitor. “In the future, Israel will be challenged at the same time on additional fronts, such as the northern front, making the challenge much tougher.”

Hauser believes Israel is constantly missing the point on the Gaza Strip. “Instead of demanding that the international community clear Gaza of all its rocket arsenals, Israel continues to make do with vague arrangements, saying ‘calm will be answered by calm’ in the hopes of delaying the next round of fighting,” Hauser said. He added, “The next clash is just around the corner — and this time it will erupt in the south and north at the same time,” just as Nasrallah and Sinwar warned this week.

According to long-standing Israeli intelligence assessments, Israel has been successful in deterring Nasrallah and his Iran-backed organization since the Second Lebanon War in 2006, meaning that he has adhered to the rules of the game established at the time and only responds to Israeli offensive activity in Lebanon, not in other arenas, such as Syria. This assessment has not changed recently, but let's not forget that until Sinwar launched rockets at Jerusalem on May 10, Israeli intelligence argued that he was focused on reaching a long-term cease-fire arrangement with Israel and on Gaza’s economic reconstruction, and would therefore not seek military escalation. “We must not forget that,” the former senior intelligence official said. “These assessments are only valid at the moment they are delivered to the political echelon.”

The military intelligence threat assessment of Sinwar differs from that of the Shin Bet security agency, which has long warned of another round of fighting with Gaza and recommended pre-emptive Israeli military action. According to the Shin Bet, Sinwar is a radical religious leader who would not shy away from a clash with Israel to achieve his goals. In other words, while he wants to ease the economic hardship of Gaza’s residents, he is unwilling to do so at the expense of his own personal jihad.

When the Military Intelligence Directorate eventually came on board with this assessment, it was too late, just hours before Sinwar ordered the firing of six rockets at Jerusalem. The military had advance knowledge of the imminent attack, and the security Cabinet debated whether to thwart it with a pre-emptive blow. Ultimately, Israel chose to let Hamas start the war rather than risk adverse international reaction by striking first. Either way, Israel’s ability to divine Sinwar’s intentions proved very limited. And as abovementioned, there are indications that from now on, Sinwar might well coordinate future attacks with Nasrallah. This simultaneous offensive activity on both fronts should be of great concern to Israel’s defense and political echelons.

Since emerging from his hiding place after the cease-fire with Israel came into effect May 21, Sinwar has been parading openly and proudly around the Gaza Strip. Israeli intelligence is watching in amazement. “He knows that in military terms, his organization has sustained severe blows,” a senior Israeli military source told Al-Monitor on condition of anonymity. “And yet he is making impressive victory laps, hugging and kissing everyone on the street, declaring that he is heading home and allegedly inviting Israel to assassinate him.”

The last remark refers to Sinwar saying May 26, “The greatest gift Israel can give me is to assassinate me. I prefer to die a martyr from an F-16 than to die of the coronavirus or [another] disease.”

Israel believes Sinwar’s euphoric mood stems from his perception of himself as a modern-day Salah a-Din, having eclipsed Palestinian President Mahmoud Abbas by firing rockets at Israel and positioned himself as the defender of Islam’s holy sites in Jerusalem. “He is particularly cocky about the fact that he fired [rockets] at Jerusalem and remained alive,” the Israeli military source said. “He looks at this event in historic terms and that helps him forget what we regard as our victory.”

The source further says that “Hamas failed to cause widespread damage or loss of life in Israel; it failed to carry out a commando raid inside Israel and to attack Israel from the sea or air, and extensive parts of its underground tunnels and shelters were destroyed. Still, for Sinwar, this is all background noise. Whereas we in the IDF (Israel Defense Forces) focus on our military and operational achievements, he only cares about public perception and the symbolic and historic level. He does not understand our language, but it is high time that we understood his.”