Israeli security agencies have been warning about Hamas increasing its West Bank activities, but Prime Minister Benjamin Netanyahu has refused to change his policies. 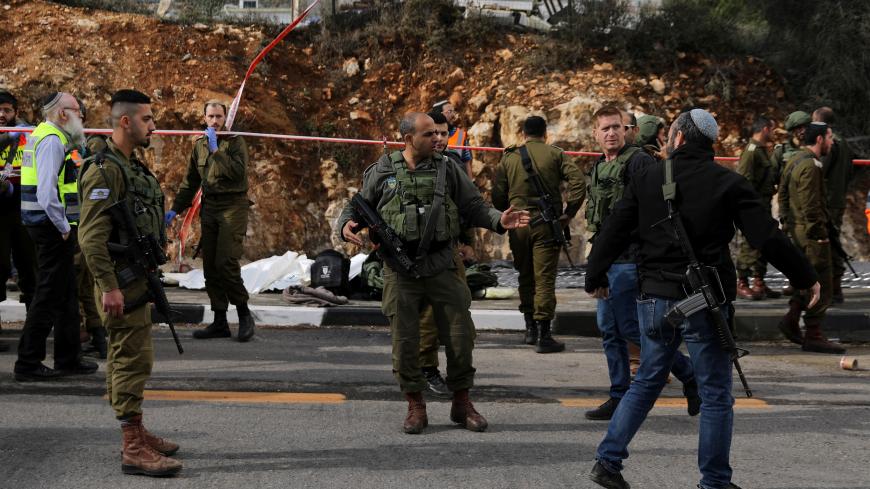 Israeli forces are seen at the scene of a shooting near Ramallah, West Bank, Dec. 13, 2018. - REUTERS/Ammar Awad

In the late morning hours of Dec. 13, Prime Minister Benjamin Netanyahu’s defense policy blew up in his face. Its guiding principle was simple: Pacify, satisfy and bribe Hamas in Gaza to maintain calm on the southern front; count on continued calm in the West Bank; focus on the northern front and Hezbollah's secret tunnels and continue battling Iran’s deepening presence in Syria and strengthening of Hezbollah. Until now, it had all worked quite well.

Thursday started out splendidly. Overnight, Israeli forces recorded a series of dizzying victories. A special forces police unit, the Shin Bet security agency and the Israel Defense Forces had located the members of the terror cell who had carried out a deadly attack in the settlement of Ofra on Dec. 9. The troops killed one of the men (Saleh Barghouti) and went in pursuit of the others. At the same time, eagerly awaited information was received about the whereabouts of Ashraf Na’alowa, the Palestinian assailant who carried out the deadly Oct. 7 attack in the Barkan Industrial Zone. He was sighted in the pre-dawn hours and opened fire at the Israelis, who shot back and killed him. This individual assailant had managed to lead astray the Israeli defense-intelligence machine for two months, mostly because he had acted alone, without any support structure or organized hierarchy. His elimination restored the Shin Bet’s aura as an invincible machine and Netanyahu could check off yet another achievement.

However, that same day, a car stopped at the Assaf junction not far from the site of the Ofra terror attack. One attacker emerged and opened fire, killing two soldiers standing there, injuring another critically and wounding a 20-year-old woman. Then he took a rifle from one of the dead soldiers and escaped unharmed.

Israeli authorities say the perpetrator was a member of Hamas, probably from the same cell that carried out the Ofra attack three days earlier. Not only did the attacks exact a heavy toll in human lives, the presence of an organized, trained and determined terror cell running around the Palestinian city of Ramallah under the noses of the Palestinian security forces, the Shin Bet and IDF with its various counterterrorism means should set off alarm bells in Jerusalem. The daring of its members who succeeded, at the height of Israel’s military readiness with its forces fully deployed, to take down three soldiers and flee unharmed shook up the top echelons of the IDF. Almost all agree that the latest developments do not augur well. Netanyahu could soon discover the downside of the defense minister’s job he took on himself almost a month ago.

Hamas is playing a clever game. In the Gaza Strip, it has given Egypt and Qatar a free hand, accepting a monthly $15 million Qatari stipend under Israeli auspices, keeping its head above water and keeping local militants under control. Hamas is now devoting most of its efforts to the West Bank. If it cannot set Gaza on fire, due to various constraints, it is determined to stir up trouble in Ramallah. Such unrest could endanger Netanyahu himself.

Israel had been successful in thwarting these intentions until now. But a terror cell running amuck around Ramallah points to a first Hamas success. “We believe it was the same cell in both terror attacks this week,” a senior military source told Al-Monitor on condition of anonymity. “Local residents are helping them, they have plans and weapons and intend to keep attacking.”

As of this writing, Israeli security forces are racing to apprehend the group. Israel wants to stop the cell quickly before it inspires widespread and enthusiastic Palestinian support. Hamas has another idea in mind: It wants to keep sowing death and shake up an indifferent Palestinian public that has fallen in love with the economic upturn in the Palestinian Authority, the reasonable standard of living there and the far better life than their brethren enjoy in Gaza or Syria.

In the evening hours of Dec. 13, Netanyahu issued a warning to Hamas: Israel will not maintain a cease-fire with Gaza if Hamas conducts terrorism in the West Bank. The threat was hollow. Hamas is not the only one anxious for a cease-fire with Israel in Gaza. A truce is also in Netanyahu’s interest and he swallowed a bitter pill to get it. He does not have a real alternative. An operation against Hamas in Gaza is not in the cards as long as the IDF is deployed on the northern front with Lebanon, dealing with the explosive and strategic issue of the attack tunnels Hezbollah has been digging for years under Israel’s nose. Netanyahu needs a cease-fire with Gaza at least as much as Hamas chief in Gaza Yahya Sinwar does. Israel has rejected Sinwar’s new rules of the game, differentiating between Gaza and the West Bank and allowing Hamas to hold its murderous stick at both ends. The question is what Israel can do about it.

These events have caught Netanyahu at a particularly bad time. Whiffs of a new social uprising in Israel are in the air, inspired by the yellow vest protests in Paris and a wave of price increases.

Over the past two years, Netanyahu has systematically ignored warnings by his defense chiefs: The military chief of staff, heads of the Shin Bet and military intelligence and other senior officials all told him that the calm in the West Bank was deceptive.

In these twilight years of Palestinian President Mahmoud Abbas, unrest is tangible with a succession battle being waged behind the scenes and growing frustration with Israel’s Gaza policy. Nurturing Hamas weakens Abbas, Netanyahu was advised, but he ignored the warnings. Now when he and his ministers look at Abbas accusingly, he cannot answer. “We’re going to miss him,” a senior Israeli security source told Al-Monitor this week on condition of anonymity. “We are systematically weakening him and then complaining that he is weak.”

This coming weekend will be critical for all sides. If the Ofra cell is caught smoothly, then Israel can hope to get back to business as usual. If the situation deteriorates and copycats imitate the cell and rile up the silent (but armed) Palestinian majority, the gates of hell could open. Experience shows that it takes only minutes to set off a Palestinian uprising, but these intifadas generally last for years. Netanyahu does not want Israel’s next lean years to start on his watch, just months before he overtakes Israel’s first Prime Minister David Ben-Gurion as the longest serving prime minister of the Jewish State.