Egypt-Qatar mediation brought about what Israel was seeking — a quick end to the violent conflict with Islamic Jihad. 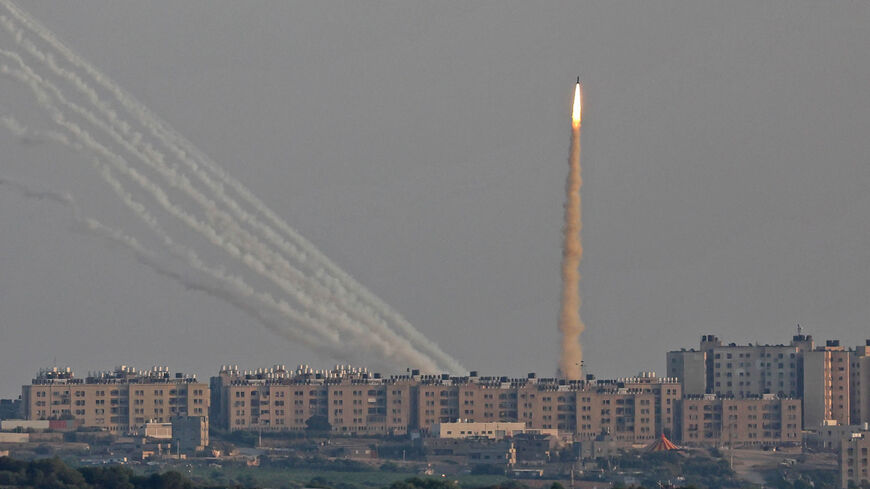 The decision by Hamas, the Islamist movement that rules the Gaza Strip, to sit out Israel’s three-day pounding of Islamic Jihad this past weekend did not come as a surprise. Not to the Israeli military brass in Tel Aviv, not to the politicians and diplomats in Jerusalem, nor to officials in Cairo and Doha. Are Israel and Hamas approaching a “hudna” (Arabic for cease-fire)? Do these two sworn enemies intend to turn their unofficial relationship into a temporary or permanent arrangement?

Al-Monitor put this question to a senior military source in the aftermath of Israel’s Aug. 5-7 operation — codenamed “Breaking Dawn" — against Islamic Jihad in Gaza. The answer was nothing short of amazing.

“We are already there. It is not official, but what is happening now between Israel and Hamas is a de facto ‘hudna.’ It is a system of big sticks and sweet carrots. Hamas is receiving what it never got from Israel before and delivering the goods to residents. They understand the price they are paying, but realize the alternative is worse,” said the source on condition of anonymity.

Asked whether this delicate framework that withstood Israel’s deadly bombing of Islamic Jihad targets in Gaza could also advance negotiations with Hamas on a return of two Israeli soldiers’ bodies and two Israeli civilians in Hamas custody, the source answered, “Presumably, but in the immediate term. We are planning more benefits for Hamas, contingent on the situation on the ground. And at some point, they will also project on that painful issue [of the hostages]."

This was Israel’s first military operation against Gaza terrorist groups since 2009 from which it emerged with a sense of strategic victory. The last time that happened was the three-week Operation Cast Lead that began in late December 2008 and was the swan song of then-Prime Minister Ehud Olmert. While there has been no shortage of Israeli operations since then — “Pillar of Defense,” “Protective Edge,” “Black Belt,” and “Guardian of the Wall,” to name a few — Israel was realistically reserved about their outcome. In that sense, its latest foray into Gaza achieved its military goal.

The Shin Bet security agency, the Israel Defense Forces (IDF) and its air force killed Islamic Jihad's top operations officers and other members of the group, as well as destroyed chunks of its terrorist infrastructure, with relative ease. Other than slight injuries, no casualties were reported on the Israeli side. All in all, according to Israeli accounts, 51 people were killed during the Gaza operation — 24 Islamic Jihad militants and 27 civilians; 47 Israelis suffered minor injuries.

Israel successfully charted the course of most projectiles fired from Gaza, intercepted most — but not all — with its Iron Dome anti-missile batteries. Thus, the IDF believes three rockets fired by Islamic Jihad toward Israel fell short of their mark, landed in Gaza and killed several Palestinian civilians, including children. Footage of the failed rocket launch minimized damage to Israel’s image abroad, battered by the killing of iconic Al Jazeera journalist Shireen Abu Akleh during a May 2022 IDF counterterrorism operations in the West Bank.

Between the afternoon of Aug. 5 and the evening of Aug. 7, the small, radical, Islamist group was pummeled by the most innovative technologies Israel’s defense industries have to offer. The intelligence it gleaned pinpointed its targets’ locations to within an inch, its new generation “smart bombs” achieved “surgical” precision and saved much collateral damage, the enhanced performance of its Iron Dome batteries recorded its best results ever (some 96% interceptions) and its air force maintained complete control of the skies over the Gaza Strip and southern Israel.

Islamic Jihad can console itself with having managed to fire rockets and mortars at Israel until the very last minute, despite continued Israeli bombing, albeit with disappointing results. The quality of its home-made rockets was poor and their targeting highly imprecise, with some 20% exploding within Gaza rather than on the other side of the border, and the vast majority failing to cause damage in Israel.

Israel achieved the military/strategic goals it set itself, and even more so — keeping Hamas out of the fighting, cutting Islamic Jihad down to size to contain its threat and restoring its deterrence. On the other hand, metaphorically, the IDF as the neighborhood bully took on the weakest kid on the bloc. While hardly an evenly matched fight, that same IDF has scored nothing more than a dignified tie in the past.

Less than 24 hours after the cease-fire took effect, Prime Minister Yair Lapid and Defense Minister Benny Gantz stepped up to the mikes on prime-time television to take their bows. The two political rivals jostling for a win in the Nov. 1 elections had been carefully portrayed throughout the operation as working in harmony.

Gantz delivered a statement designed to resonate throughout the Middle East. “In the future, if necessary, we will conduct pre-emptive strikes to protect the citizens of Israel, its sovereignty and infrastructure. This is true on each front, from Tehran [Iran] to Khan Yunis [Gaza],” he said. Gantz referred to the fact that this was the first time in a long while that Israel had launched a pre-emptive strike against an enemy, which could have potentially escalated into all-out regional war. His statement appeared to signal that Israel would consider a similar pre-emptive strike, albeit of a completely different magnitude, against Iran.

Gantz and Lapid are enjoying the fruit of Israel’s unprecedented diplomatic momentum in the region. Both thanked Egypt for its mediation with Islamic Jihad, and Gantz also mentioned Qatar’s role, a veiled reference to his frosty but interesting relations with the Qataris who played a bigger role than expected in ending this crisis. Reportedly, Qatar made clear to Islamic Jihad that its continued pivotal and generous support for Gaza’s economy depended on a speedy end to the fighting with Israel.

Hamas, too, will soon benefit from these developments. In his remarks, Lapid told Gaza’s 2 million Palestinian residents that they could have a far better future. Security sources told Al-Monitor that thousands of Gazan laborers would return to work in Israel as of Aug. 9, and Israel would consider expanding the number of work permits from 14,000 to 20,000. Additional concessions are also being considered, including permits for Gaza residents wishing to go abroad to fly out from Israel’s southern Ramon airport after Israeli security vetting.

To sum up: While this may not be a full-fledged "hudna," nor a honeymoon of any kind between Israel and Hamas, it could herald the start of something real if both sides are careful to nurture the current achievements. Sadly, the prospects of something going wrong and burying these dreams are far greater than the other possibility. Both peoples will be forced to continue holding each other by the throat for many years to come.