Jerusalem is hoping that Hamas will stay out of the conflict with Gaza-based Islamic Jihad, as PIJ and Iranian officials meet in Damscus. 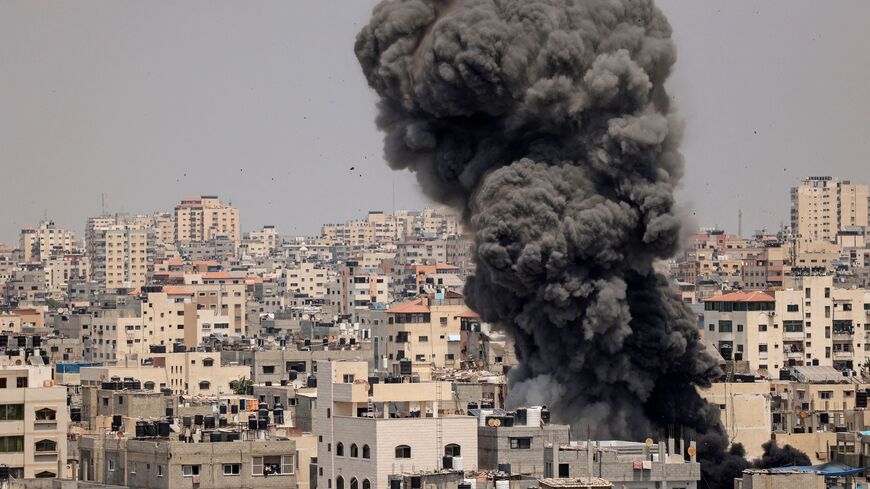 Smoke billows from an Israeli airstrike in Gaza City on Aug. 6, 2022. - MAHMUD HAMS/AFP via Getty Images

Israel’s Operation Breaking Dawn against Gaza-based Islamic Jihad (PIJ) entered its second day, with the Israel Defense Forces (IDF) continuing to fire at targets in the Strip. In retaliation, through the night and continuing this morning, Israeli towns close to the border with Gaza came under rocket fire. Warning sirens have been sounding since last night in the southern Israeli villages near the Gaza border, the southern towns of Sderot, Ashkelon, Ashdod and Yavne, and also in the more central cities of Rishon Lezion, Holon and Bat Yam. Citizens in the communities near Gaza were instructed to stay near the shelters. Citizens in central-south cities were instructed to be sure their shelters are open in the event of sirens.

Prime Minister Yair Lapid convenes this evening the Security Cabinet for an update at the Defense Ministry headquarters in Tel Aviv. He has also invited opposition leader Benjamin Netanyahu for a security briefing tomorrow morning.

Operation Breaking Dawn was launched yesterday afternoon. At precisely 4:16 p.m., the IDF pummeled seven stationary and moving targets in the Gaza Strip. The strike lasted 170 seconds (nearly three minutes). Its main target was a fourth-floor apartment in Gaza City’s Rimal neighborhood, the hideout of Tayseer al-Jabari, chief of operations for the PIJ in Gaza who had spent the previous days seeking out Israeli targets for his group’s anti-tank missiles. Israel said it also hit two PIJ teams deployed on the ground who were waiting for an opportunity to launch their rockets.

Jabari was killed at once in the surgical strike by guided bombs on his apartment. All in all, according to Israeli estimates, 15 people were killed, most of them PIJ operatives preparing to strike Israel and, sadly, a 5-year-old Palestinian girl. That was the opening salvo of an apparently long-planned operation against the PIJ. The opening barrage was one of the most impressive in Israel’s long history of attrition with Gaza.

Jabari was a marked assassination target since replacing Bahaa Abu el-Atta, commander of the PIJ’s southern division who was killed along with his wife in a similar Israeli strike on his hideout in a November 2019 operation against his organization dubbed Black Belt. Israel considered Atta the neighborhood Gaza bully who pushed repeatedly for terror attacks against Israelis, launching numerous rocket attacks at Israeli communities in defiance of a ban by Hamas, which rules the Gaza Strip.

Atta made the lives of Gaza residents miserable, exposing them to Israeli retaliation, and was reviled by Hamas as a rogue operative challenging its rule of the enclave. Hamas sat out the six-day 2019 operation, which consisted of barely two days of actual fighting, leaving the PIJ on its own to bear the brunt of Israel’s attacks.

The same scenario is repeating itself now. Israel is careful to avoid dragging Hamas into the fighting with the PIJ, an objective that has been successful as of this writing. Hamas of 2022 has much more to lose than it had in 2019, courtesy of Israeli and Egyptian attempts over the past year to rehabilitate the Strip. Gaza now has more hours of power a day than Beirut does. Some 20,000 Gaza residents cross into Israel daily, with monthly wages as high as NIS8000 ($2,400), 10 times the pay they would have received in one of the world’s poorest enclaves had they been able to find work in an economy with more than 50% unemployment.

One of the major aims of the Israeli operation, which is taking place during an election campaign as is often the case in recent years, is to maintain the differentiation between Hamas and the PIJ. The IDF’s surgical strikes, based on intelligence supplied by the Shin Bet security agency, were preceded by a diversionary Israeli ploy designed to lull Jabari and his group into thinking they would not be targeted as they prepared to exact revenge for Israel’s Aug. 1 arrest of the PIJ’s West Bank commander Bassem Saadi.

While Jabari went into hiding and adopted other emergency measures, Israeli intelligence was able to locate him with impressive precision. The opening strike, as mentioned, was a notable success, but it is too soon to celebrate. Many similar Israeli military adventures have started out with a bang and ended with a tearful whimper. Then-Prime Minister Ehud Olmert went into the 2006 Lebanon war on a high note, only to emerge 50 days later a lame duck.

The PIJ launched during the night over 160 mortars and rockets at Israel in retaliation for its strikes, without causing substantive damage and with only a few people injured. Some 30 projectiles fell inside Gaza; 80 were intercepted by Israel’s Iron Dome anti-missile defenses, and 70 more came down in unpopulated areas.

More rockets have been launched toward Israel since this morning, with one of them hitting a house in Sderot. Family members were hiding in the shelter room and were not hurt. An update by the IDF a short while ago said more than 200 rockets and mortar shells were fired at Israel since the beginning of the Breaking Dawn operation. Reports also said the Islamic Jihad rejected a proposal by Cairo for a few hours of cease-fire.

If they could, Lapid and Defense Minister Benny Gantz would undoubtedly declare the operation over and resume their daily routines, but that is not an option. All eyes are now on Jerusalem and the Temple Mount. At sunset on Aug. 6, observant Jews start marking the ninth day of the Hebrew month of Av with a daylong fast to lament the destruction of the first and second Jerusalem temples (586 BCE and 70 CE). Many congregate in prayer at the only remaining vestige of the temples, the Western Wall.

The site, adjacent to one of Islam’s holiest sites, Haram al-Sharif, is a perennial tinderbox. In May 2021 it was lit when Hamas and the PIJ launched rockets for the first time ever at Jerusalem, ostensibly to protect their holy sites there. Their main achievement in the operation dubbed Guardian of the Walls was setting off bloody riots in mixed Jewish-Muslim cities across the country.

Will we see a repeat on Sunday as Jews mark their observance at the wall? Public Security Minister Omer Bar-Lev has already ordered a call-up of 10 reserve Border Guard battalions in the event rioting erupts.

Eyes are also being directed toward Tehran, where by some fateful coincidence the Damascus-based leadership of the PIJ is holding talks with Iran’s leaders, his group’s main backers.

“The fact that (PIJ Secretary-General Ziad) al-Nakhala is in Tehran at the moment and even met with Iranian President (Ebrahim) Raisi,” a senior Israeli military source told Al-Monitor on condition of anonymity, “could make it harder for the Jihad to wind up this event quickly. … They will want to prove to their Iranian operators that they are supplying the goods. Hopefully, they will realize quickly that there are no goods to supply.”

Even as Israelis engage in military operations, there is no getting away from politics.

Less than three months to the Nov. 1 elections, which will determine whether he graduates from a caretaker prime minister to a full-time one, Lapid underwent his security baptism by fire.

For his rival, Gantz, this is his third confrontation with Gaza. As IDF chief, he commanded the 2014 Protective Edge operation against Gaza, and as defense minister the 2021 Operation Guardian of the Walls. As was the case then, Gantz is now overseeing the operation alongside a prime minister whom he does not particularly like and against whom he is running for re-election (then Benjamin Netanyahu, now Lapid).

Still, as far as Gantz is concerned, these two rivals of his are vastly different. Netanyahu is a bona fide rival, whereas Lapid is a member of Gantz’s centrist political bloc. Right now, the chemistry between Gantz and Lapid appears far better than it was with Netanyahu, and for good reason: Netanyahu, making a concerted comeback effort, is a shared enemy and a threat to them both.