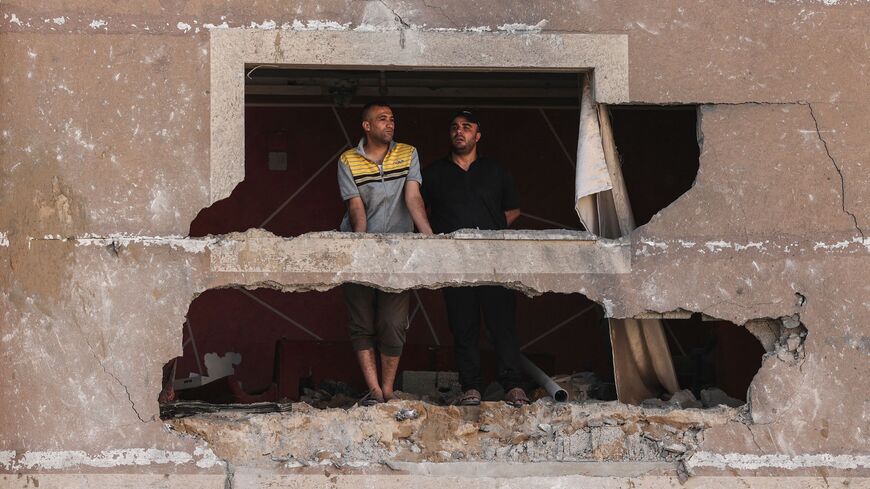 Palestinian men look out of a damaged building after a cease-fire between Israel and Palestinian militants in Gaza City, early on Aug. 8, 2022. - MAHMUD HAMS/AFP via Getty Images

Israel’s military operation against Palestinian Islamic Jihad in Gaza, codenamed “Breaking Dawn,” lasted 56 hours. The fighting has paused with a cease-fire announced late last night. Reportedly, IDF believes Israeli strikes killed 35 people in Gaza during the fighting, 11 of them civilians and the rest PIJ militants. An additional 15 or 16 civilians were killed, it was claimed, by Gazan rockets that fell short. On the Israeli side, 47 people were injured lightly.

From the IDF’s strategic point of view, the operation went as planned, reaching most of its military goals. Within three days, the Iran-backed PIJ had been dealt blows from which it will be hard to recover. Still, it is difficult to predict how long the fragile ceasefire will last.

The operation followed three tense days along the border with Gaza last week, during which the military came under criticism for limiting the movement of area residents based on vague threats of planned PIJ retaliation for the Aug. 1 arrest of its top commander in the West Bank.

On Aug. 5, based on intelligence from the Shin Bet security agency, the air force swooped in on PIJ’s northern Gaza commander Taysir al-Jabari with guided munitions and fired at his hideout in Gaza City, killing him and also taking out several PIJ teams Israel claimed were on their way to fire anti-tank mortars toward Israeli communities.

The Israel Defense Forces, which had already deployed batteries of its anti-missile Iron Dome interceptors at strategic locations in southern and central Israel, announced the start of the operation and urged residents within 40 kilometers (25 miles) to remain close to shelters in preparation for expected PIJ attacks.

According to an Aug. 8 IDF summary of the operation, PIJ launched some 1,100 rockets and mortars at Israel during the 56 hours of fighting, 200 of which landed inside Gaza. The Iron Dome systems shot down 380 of the projectiles that were considered to be on target, a 96% interception rate.

Two days before that, on Aug. 6, the IDF refuted reports about Israeli fire killing several civilians and children, sharing footage indicating that they had been killed by PIJ rockets, which exploded before reaching Israel.

In a key to ending the operation after three days only (compared with previous IDF operations in Gaza), and preventing the deadly conflict from expanding into the West Bank, Israel managed to keep Hamas out of this round of fighting.

Unlike in the May 2010 round of fighting with Gaza, neither Palestinians in the West Bank nor Israel’s Arab citizens joined the fray. The distinction was particularly noteworthy as observant Jews marked the Tisha B’Av fast on Aug. 7, lamenting the destruction of Jerusalem’s Jewish temples some 2,000 years ago. Some 2,200 Israeli Jews ascended the Temple Mount compound without any major incidents.

Hezbollah also sat out the fighting, especially in light of tensions with Israel over the organization’s opposition to the emerging Israeli-Lebanese agreement demarcating their economic waters.

With intensive involvement by Egyptian mediators, a cease-fire was declared at 11:30 p.m. on Sunday. PIJ continued to fire at Israel after the deadline, launching three rockets toward Jerusalem (which fell far short of their targets). The IDF, for its part, ended the operation with one final attack on PIJ targets before the guns were silenced on both sides.

The ensuing hours remained calm, and on the morning of Aug. 8, defense authorities announced a return to normal and reopened the Erez Crossing from Gaza for the passage of Palestinians working in Israel and the Kerem Shalom Crossing for the passage of goods into the enclave.

While this current round has ended, few believe it could be the last. Israel's success will be measured by the deterrence achieved and the speed with which PIJ rebuilds. It is a small, rogue organization, far weaker than Hamas and certainly Hezbollah in Lebanon. Israel has much stronger enemies.